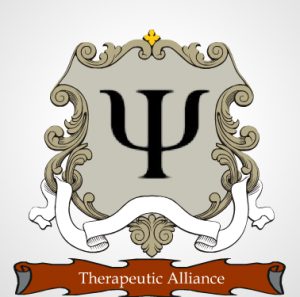 No, I didn’t spend lots of my afternoon creating a logo for a fictional, crime-fighting Therapeutic Alliance. What makes you ask such a thing?

There’s a lot of talk in my clinical classes about who and what succeeds in therapies. Does it matter if you’re a matched or unmatched gender from your client? (Probably not, except maybe for teens. ) What about matched ethnicity? (Maybe for some ethnicities.) Does it matter what sorts of therapy you’re practicing? (Sort of? Maybe. Okay, we’ll concede that we disagree a lot.)

But there’s this one thing that we do think is important, across all sorts of other variables. The therapeutic alliance. Sadly, not a secret cabal of psychotherapists, fighting crime and kicking ass.

[Psssst, I would TOTALLY JOIN if someone reading this were recruiting for such an alliance. Ahem.]

Therapeutic alliance is the sense of working together as a team, client and therapist. Depending on who you talk to, it involves empathy, reciprocated positive feelings, a sense of collaboration, and the client’s belief that the therapist supports them. More interestingly, it’s a fantastic predictor of both whether or not clients will stay in therapy and whether or not therapy will result in positive outcomes, across the type of therapy.

Right okay, so the importance of the therapeutic alliance makes intuitive sense too.

Except, imagine that your professional success hangs very much on being able to make people with a wide variety of backgrounds, cognitive distortions, and expectations for therapy like and trust you within the first few hours you spend together. And your job is to do this over and over and over.

And the advice you get for how to do this involves things that seem to be on the simplistic side. Don’t seem distracted. Don’t watch the clock. Don’t invalidate their emotions. Don’t seem judgemental. Great advice! But not exactly going to turn you into the perfect stranger to share deep and scary secrets with.

In trying to pull this apart, I’ve a theory, which generalizes outside of couch-based relationships. When people say lots of words at you, picking which ideas you respond to is important.

Again, not earth-shattering. Boring and mundane, even. Bear with me.

An example, from the non-therapist version:

Jeremy: Hey, I noticed you’ve seemed a little upset this week. Is anything going on?

Eliza: Yeah, it’s been a rough week. My parents have been fighting constantly–you know, the loud, shouty fights that you can’t not hear. I’m afraid they’re considering splitting up. And I’ve been stuck at home because my car’s in the shop; I have no idea how I’m going to afford the repair I need.

Jeremy: Yeah, I hear you. It’s almost impossible to take a car in and not have to spend a ton of money.

…and at this point, I bet a bunch of you are patting yourselves on the back for spotting what happened. Go you! Jeremy asked after Eliza, who helpfully explained she had BIG STRESS X [parents shouting constantly and unavoidably] and Small Stress Y [cars are expensive to repair]. Given the opportunity to respond to X or Y, Jeremy commiserated about how cars are expensive to maintain.

If Eliza and Jeremy are close, she can agree and then turn the conversation back to shouting parents, or decide that Jeremy’s response doesn’t condemn him as Worst Friend Ever, and find someone else to pour her heart out to later.

And I want to throw some sympathy in Jeremy’s direction! “My parents are shouting and might be splitting up” is not light conversation and I’d bet that his internal monologue sounded like “helphelphelp, what’s the script for this, OH, I know how to talk about repairs being expensive!” or “oh noooo, that sounds really hard, what do I say next? uh oh she stopped talking now I talk aaaaah”

Point is, this might be frustrating for Eliza if it’s the default mode of their friendship, but I expect it’s unlikely she’ll even notice at the conscious level it’s happened this one particular time. Most people simply don’t analyze friendships at the level where they can articulate “I expressed two worries and Jeremy picked the lesser of the two to discuss, when clearly the greater worry was my parents marital status”, nor do they need to.

Let’s go back to therapists and therapeutic alliance. I think that lots of what stymies the therapeutic alliance is a version of this. Except instead of having a background of friendship and understanding, there’s this client, who maybe isn’t even sure therapy can help, and what if this person makes fun of these weird feelings like everyone else did? There’s all these unseen, not-quite-expressed negotiations where the therapist is trying to get information without interrogating and the client is trying to test the waters with progressively more personal information and lead the therapist towards asking the questions that will let them do that.

So, Client Eric says that he’s been worried about school and can’t sleep because he’s had so much homework. And Therapist Evangeline wants to talk about coping techniques for dealing with school–which helps Eric. But Eric, who has only met Therapist Evangeline once before, at intake, was hoping she’d ask after that not-sleeping part, because he’s had insomnia for a few years and everyone else thinks it’s normal college behavior, but a few times he didn’t sleep for days and what if that’s really bad…?

Client Eric might be able to fix this if he points out that he wants to talk about his sleep, and does Therapist Evangeline mind, but that’s hard, especially if Eric’s mindset is that the therapist is the expert who will fix his brain. It’s not that this is a bad mindset, it’s just that Correct the Authority Figure” is a harder game than Correct the Nice Stranger Sitting Across From You.

So after a few sessions where Eric says A and B, and Evangeline focuses on A, when Eric’s worried about B, Eric might feel like he’s not being listened to. He’s not right, exactly–Evangeline is listening. If you press Eric, he might be able to tell you that she just….didn’t get it.

And I think this is basically what makes the therapeutic alliance fail between some clients and some therapists, all other things equal. For some set of clients, a therapist is great at figuring out what part of a given response to hone in on, and for some other set, they miss enough to give the feeling that they’re not paying attention or don’t care or just…don’t ‘get it’

I…don’t actually know how to fix this. Or if it’s fixable. I know that being able to label this difference between a therapist I adored and a therapist that was meh made me feel more in control. I wasn’t unreasonable, it was that I kept wanting to talk about Thing One, and they kept asking after Thing Two, which in my mind was more a detail to round out my story than a Large Problem. Once I was there, I could point out that my concern was Thing One, and did they mind if we explored that? It was tiring, and all things being equal, (they weren’t) I would have found another therapist. But instead of therapy being a nebulous and confusing interaction, I could pinpoint exactly where the exchange was getting unhelpful.

*For the record, this is probably overly simplistic. If you’re trans*, I’d bet it would make things a lot more relaxed and open if your therapist were too, along with some other permutations that probably haven’t been investigated closely. Further, my guess is that the effect is fragile for most of these differences anyways.

Like Loading...
Please Stop Talking About All Those Babies Waiting To Be Adopted » « Some Musings on Cognitive Behavioral Therapy