So, there’s this article in The New Republic. Meet the New Anti-Adoption Movement: The surprising next frontier in reproductive justice. And I, being the sort who dutifully reads any instance of Someone Wrong On The Internet that crosses my field of vision, clicked.

It’s not bad. The title, fortunately, seems to be butchering the aims of the actual movement, which might be better represented as The Ethical Adoption Movement That’s Not Actually All That New. They’ve got some goals I strongly admire–preventing manipulation of distressed and pregnant parents, encouraging expectant parents to consider that adoption is a life-long process for everyone involved, promoting open adoption, and preventing agencies from lying to pregnant parents about abortion. Admirable, yeah?

Reported with a dangerously dramatic brush? Also yeah. For instance, take this:

They want, among other things, a ban on adoption agencies offering monetary support to pregnant women. They want to see laws put in place guaranteeing that “open” adoptions (where birthparents have some level of contact with their children) stay open. They want women to have more time after birth to decide whether to terminate their parental rights.

A ban on monetary support? It sounds like it would prevent bribing parents. It probably would! However, it would also prevent (as The New Republic’s wording stands) adoption agencies from providing expectant parents with maternity care, prenatal vitamins, assisting them in maintaining housing, etc. Do you know how to dramatically increase the health and functioning of a fetus–particularly one in poverty? Maternity care and vitamins. It is true that unethical agencies do some seriously sleazy behavior in pursuit of convincing expectant parents to choose adoption, and TNR’s article does cite that. (Paying for college in return for a child? No good, very bad.) But a ban is excessively absolutist.  Create ethical guidelines that protect parents; don’t prevent agencies from serving children and families.

But what about the idea of a mandatory wait before terminating parental rights?

….for a nuanced and careful definition of ‘more’.

The article fails to note that these EXIST. See: Arizona, California, Connecticut, Florida, Iowa, Illinois, Kentucky, Louisiana, Massachusetts, Minnesota, Mississippi, Missouri, Montana, Nebraska, Nevada, New Hampshire, New Jersey, New Mexico, Ohio, Pennsylvania, South Dakota, Tennessee, Texas, and West Virginia. That’s only the states that require forms terminating mothers’ rights to be filled out at least 48 hours after birth–many of the rest require at least 24 hours. Only two states, Alabama and Hawaii, allow the rights of the person who gave birth to be terminated before the child is born. 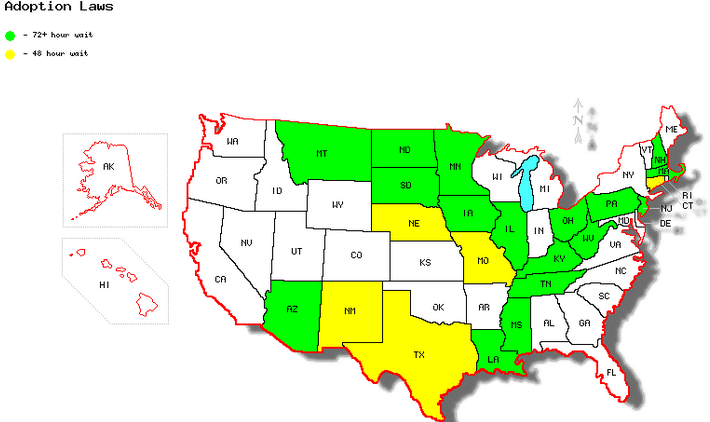 Map of 72+ and 48 hour wait post-birth for termination of birth parent rights, minus CA, which I forgot, and will fix ASAP. (Many of the blank states have <48 hour waiting periods)
Map via http://diymaps.net

That being said, saying “there should be a mandatory wait after birth before signing final papers” is COMPLICATED (and already exists in places, which the article entirely fails to address)For instance, in Illinois, like many of the states listed, the wait is 72 hours, or three whole days. This sounds like a good idea in practice: the person who’s given birth is less likely to be under the influence of drugs, slightly less tired or emotionally exhausted from labor, and has met the child they just birthed.

Except, that it’s also true that 72 hours is longer than the time a parent with an uncomplicated birth would stay in the hospital. (Average stay for regular vaginal birth, 48 hours) Which means:

Option One: Birth parent has to go home with the child. Can you say huuuuuge stress on them if they want to continue with adoption and later have to give the child to the adoptive family? Also, sending an unwanted child who cries at all hours of the day, needs constant care, and will die of neglect or bad care is a risk. Babies are entirely dependent on their caregivers. This is especially there are compounding issues like postpartum depression or substance abuse. In theory, Child Protective Services should step in or catch those cases, and place the child elsewhere. In practice…

Along with this, working class birth parents (general PSA that most people over-estimate the number of parents who put children up for adoption who are teens, impoverished, or in their first pregnancy. I was one of them. Please don’t assume you’re the exception.) need to work or find alternate care for their children. That’s expensive. (Particularly, say, if a total ban on financial support from adoption agencies is enacted)

Option Two: The prospective adoptive family goes home with the child and with some legal decision-making capability over child’s care, (in IL, my understanding is that the agency in question holds Power of Attorney) but papers that terminate the rights of the legally-defined birth mother aren’t signed.

This is a massive legal and emotional risk, and some families just won’t do it. Sometimes families do it, and then the birth mother decides not to sign the papers–upon reflection, they decide to parent. (20-30% of expectant parents who select adoptive parents for their child go on to parent themselves instead.) In cases like that, the adoption agency has to call the family and request that they bring the child back, as it’s not theirs. NOT pleasant for anyone.Not Really A Standard Option, But Let’s Talk About It: Placing the child in a nursery or some other form of care until papers are signed. There’s one agency in the entire U.S with an in-house nursery, and even then, many birth parents don’t want to put their ,  child in the care of strangers in a location that may be tough to access while they make their final decision. So.Waiting periods: a good plan, in theory. I support them! Parents should sign stuff when not under the emotional strain of birth. However, really long ones are emotionally overwhelming and complicated, and just blanket advocating for more time is a dangerously simplistic position.

In the comments, please follow these guidelines for increased accuracy: