1. You know you’ve done a good job (or at least, you’re overestimating less than usual…) when David Dunning himself comments on your writeup of the Dunning-Kruger effect. For bonus, read the original paper–or at least the abstract. It begins…

In 1995, McArthur Wheeler walked into two Pittsburgh banks and robbed them in broad daylight, with no visible attempt at disguise. He was arrested later that night, less than an hour after videotapes of him taken .from surveillance cameras were broadcast on the 11 o’clock news. When police later showed him the surveillance tapes, Mr. Wheeler stared in incredulity. “But I wore the juice,” he mumbled. Apparently, Mr. Wheeler was under the impression that rubbing one’s face with lemon juice rendered it invisible to videotape cameras (Fuocco, 1996).

….and it only gets better from there.

2. Beautiful things to look at: a crisp infographic–how many millions of lines of code? Your genome, World of Warcraft, the Large Hadron Collider? And even prettier: abandoned observatories.

3. Once upon a time there was a terrible article about habits of the rich that the poor should emulate. And then there was this article, and we could all go back to trying to live happily ever after.

Dave Ramsey probably wasn’t expecting this much pushback when he shared a piece by Tim Corley contrasting the habits of the rich with those of the poor. In her response on CNN, Rachel Held Evans noted that Ramsey and Corley mistake correlation for causality when they suggest (without actually proving) that these habits are the cause of a person’s financial situation. (Did it never occur to them that it might be the other way around?)

Ramsey fired back, calling the pushback “immature and ignorant.” This from a guy who just made 20 sweeping assertions about 47 million poor people in the US — all based on a survey of 361 individuals.

That’s right. To come up with his 20 habits, Corley talked to just 233 wealthy people and 128 poor people. Ramsey can talk all he wants about Corley’s research passing the “common-sense smell test,” but it doesn’t pass the “research methodology 101” test.

To balance the picture a bit, I wanted to take a fact-based look at 20 things the poor do on a daily basis…

4. NPR’s Tiny Desk Concerts has Dessa. That is all.

5. Over at Brute Reason, What This Depression Survivor Hears When You Call Religion A Mental Illness

And in addition to that, the fact that probably zero religious believers think that their religion qualifies as a mental illness is a good indication that you should stop saying that it is. Of course, you can and should disagree with them on other things, external things, like whether or not god exists or whether or not religion is a net good in society or whether or not people can be ethical without religion. But what goes on in their own minds is something they know much more about than you ever will. 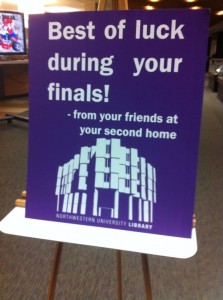 My week involved a lot of walking past this sign.

6.  I have a lot of feelings about this article about negative vs. excessive feelings.

7. This article on internet linguistics. Much thought-provoking. Very analysis. Wow.

In other news, my finals are donedonedoneDONE. (I mean, for at least ten weeks, until the next round. Go away, reality.)