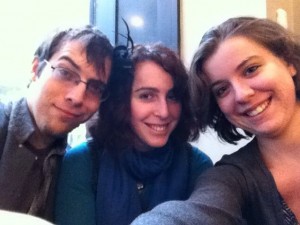 Robby, Miri and I, reunited and silly with happiness pre-Solstice and post-bagel.

1. I talk a lot with adjectives–things are spectacular and wonderful and glorious and amazing and awesome. But I think, to catch the joy of what the Brighter Than Today Solstice in New York was, I think I’d tell little stories.

How it felt to sing among friends–something I haven’t done in years.
The joy of watching an entire group of people laugh and cry and be in awe together.
Book recommendations flying thick and fast at the reception–attendees carrying books! (That’s not even including CFAR’s box of Harry Potter and the Methods of Rationality)

Joyous singing, gathering, community. What a way to close the quarter.

3. The language we use to talk about substance addiction matters. In fact, it matters very much:

Those clinicians exposed to the “substance abuser” term were significantly more likely to judge the person as more to blame and more deserving of punishment than the exact same individual described as having a substance use disorder. We tested these terms in a general population sample and found even larger differences with more negative and punitive judgments strongly associated with the “abuser” term.

Luckily, the current federal drug czar (try putting that on your resume) seems to be on board with treating drug addiction more like a complicated problem for science and less like a convenient political football.

4. When I was working in schizophrenia research, and in discussions I’ve had since, that marijuana can trigger earlier onset of schizophrenia in those at-risk already has always been a foregone conclusion. I’ve certainly repeated it enough–bolstered by studies such as this and this. Now, some new research that makes the opposite claim: marijuana has no measurable effect on schizophrenia onset. (academic link)

5. For those with disordered eating, veganism and vegetarianism are not as simple as investment in animal-rights or environmentalism.

Food justice is complicated, and we live in a world in which the use of animals for human profit is taken for granted, often invisible, and ingrained culturally (I just realized there are at least three animal-marginalizing expressions in this post that I wouldn’t have used when I was a vegan). I don’t begrudge anyone what they choose to eat, or not eat, anymore. I respect vegans and I will continue to try to find a place where my values and my health are both satisfied. But I’ve learned that food is so much more than just food––for some, due to health concerns, it’s an enemy. For others, it’s love. For still others, it’s power and control. And for far too many people, it’s an unmet need.

6. An ode to the crazy, messy, impulsive, and uncomfortably honest romance of Love, Actually.

Love Actually is only a traditional romantic comedy insofar as it is a film about romance that has humor. It does not have the structure required of the genre. To be honest, if you’re going to compare it to any one film you should probably compare it to Crash, the working title of which I’d like to think was Racism, Actually.

Love Actually is, in fact, less a film about love as it is a film about people who think they are in love. Almost all of the stories center around people who either early on, or before the film even begins, figure out they’re nuts about someone and then spend the five weeks before Christmas wondering, “What do I do now?” It’s a bit like Hamlet but with romantic gestures instead of, you know, death.

7. A long read on the story behind the Intense World theory of autism. Well worth the time, with bonus accessible neuroscience and not-terrible coverage of autism!

What have you been reading lately?