I’ve mentioned it before, but it bears repeating:  If you represent Harry P fandom by so little an act as having your “house” in your bio, you’re giving money to transphobia and fascism by advertising the works of an author who puts her royalties to those exact ends.  Don’t take my word for it.  Here are some people who actually liked Harry P at one point in time – indeed, may hold some fondness for that community and those experiences even now: 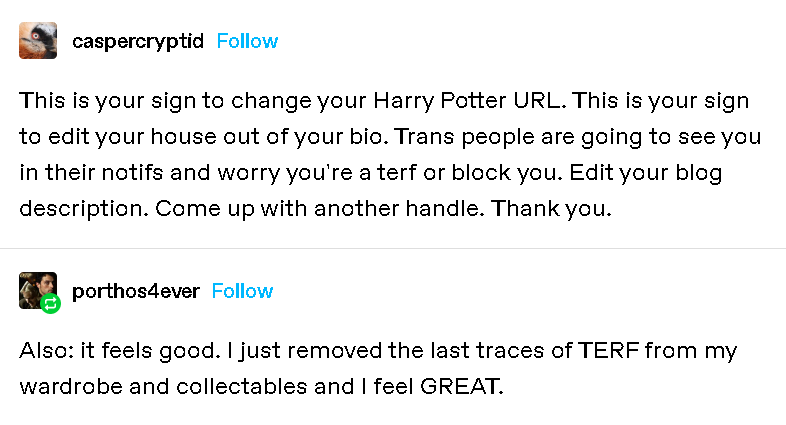 I was cutting people with Hogwad houses in their bios some slack, but that’s over now.  It has indeed become a new criteria for me in blocking and blacklisting – any mention of Harry P shit that isn’t cancellation or ripping on it.  If you’re promoting her IP, you’re giving her money, whether you pay her directly or not.  No more quarter.  Even if I wasn’t a flavor of trans, even if I didn’t personally know trans people, transphobia is the current wedge issue / hobbyhorse of every nazi piece of shit from Zimbabwe to Kazakhstan, from DC to the Kremlin.

Trans rights have become the line we all need to defend, for the sake of trans people yes, but now for the sake of every decent person in the world – very much like gay rights in 2004.  Let this cancellation be complete.  Let any enjoyment you have of those stories remain private.  Don’t let the Queen Terf claim you as one of her own.  Say no to Harry P shit.