At a recent book sale to benefit my local elementary school, I happened to find a copy of Herland near a copy of Nebula Award Stories 8, edited by Isaac Asimov. Both I grabbed, the former because my current copy is an ebook, the latter because the anthology boasted stories by Clarke, Anderson, Pohl, Ellison, and others. 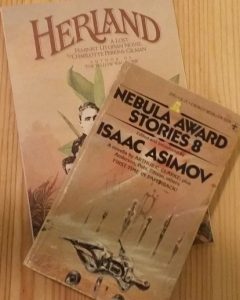 Among those “others” in this 1972 paperback is Joanna Russ; her story “When It Changed” won the Nebula for best short story published that year. In this story, a planet populated entirely by women is visited by men. The men on the planet had died hundreds of years before, so none of the women had first-hand knowledge of men—a parallel to Herland.

What’s strikingly different is that while Gilman’s all-women society is a utopia, the society that Russ created, the planet Whileaway, is not. Children are communally raised in Herland; society conducts itself in a “feminine” manner. On Whileaway, a sense of individualism permeates the culture. The narrator considers her twelve-year old daughter’s imminent coming-of-age: “Some day soon, like all of them, she will disappear for weeks on end to come back grimy and proud, having knifed her first cougar or shot her first bear, dragging some abominably dangerous dead beastie behind her, which I will never forgive for what it might have done to my daughter.” Though men are absent from the planet, a sort of stereotypically male relationship between people and nature—and among the people themselves—remains.

Aside from the obvious differences between these two takes on women-only societies, one notable distinction between them struck me: guns. Guns are conspicuously absent from Herland—they’re not needed in a society without conflict. On Whileaway, they’re a part of daily life. And in spite of their presence, what guns they have are not enough to protect the women there: “Men are coming to Whileaway. When one culture has the big guns and the other has none, there is a certain predictability about the outcome.” Katy, the narrator’s wife, never touches her rifle, because, as she says after she nearly shoots one of the men who do come to their world, “’I knew I’d kill someone.’”

As a Texan following our current legislative session, I’m not surprised that I focused on this difference. A number of bills have been put forth that would make owning and carrying guns far easier than it is now—and that’s not to say that it isn’t already quite easy here. And as a Texan, I hope common sense will prevail and that these bills will not pass. And as a writer of science fiction, I’ve been considering the ways in which state and national bills and legislation will affect us in the future.

In the coming weeks, I’ll be writing posts about gun ownership and mental health, gun ownership as a signifier of social status among the middle class, and how gun training might be implemented in public and private schools.

In the meantime, y’all, I’ve got letters to write.  From The Dallas Morning News: “Texans could carry a handgun without a license under a House bill that’s stuck in the chamber.”