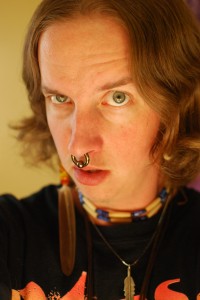 An enormous confetti bomb of white privilege and transphobia has exploded through my entire life in the past week, and as I’ve been doing a lot of pretty important writing about it, I’d like to share some of it with you here. There are two core issues at work here. The first concerns SlutWalk, and the second concerns the environmental movement. In both cases, the best of the worst of white privilege and transphobia have precipitated. All in one week! If you’re having a bad day, I’d advise against reading this post until you’re in better spirits.

END_OF_DOCUMENT_TOKEN_TO_BE_REPLACED

A brief note from Jamie on the piece of writing (by another author) that takes up the majority of this post:

For readers who are unfamiliar with the Truth and Reconciliation Commission, this is a government-implemented program in Canada, which visits indigenous communities primarily for the express purpose of hearing the experiences of residential school survivors, which are then reported to the Canadian government along with any insights shared by those communities about how the government can take steps towards reconciling with indigenous communities. Residential schools were geographically isolated institutions initiated by the Canadian government and run by the Roman Catholic and Anglican churches, in which more than 150,000 indigenous children over the course of more than a hundred years were forced to face horrific physical, sexual, and spiritual abuses while being racially and culturally brain-washed, in a campaign of systematic cultural genocide. Many children were assigned Anglicised names or even referred to only by numbers, many healthy children were intentionally exposed to tuberculosis, and countless children died alone in remote wilderness trying to escape. The last Canadian residential school closed in 1996, in Alberta. A majority of Canadian public schools do not even acknowledge this facet of Canadian history, and as a result, a significant majority of settler Canadians have literally no understanding of the continued legacy of trans-generational violence within indigenous families and greater communities. As a result, that majority tends to harbour dehumanizing and blatantly racist attitudes towards this country’s indigenous peoples, which prevents reconciliation between indigenous peoples and settler society, continues to maintain serious social barriers against the social growth and empowerment of indigenous communities, and prevents the Canadian government from being held accountable for its actions and racially selective policies against indigenous peoples (thus contributing to the perpetuation of debilitating racial injustice on the scale of genocide, merely repackaged to appear otherwise). This is all especially important given that indigenous populations across the country are once again on the rise (e.g., it is estimated that within the next ten years, up to a third of the province of Saskatchewan will be of indigenous heritage) and yet currently, approximately one half of all children currently in the custody of child care services are of indigenous heritage (i.e., child care services taking custody of indigenous children has become the new residential school system — there are now more indigenous children separated from their families by this abuse of power than there were during the 60s scoop). The following is a two-page essay that was handed to me by the author (a residential school survivor) at a recent consciousness-raising rally for indigenous rights.

END_OF_DOCUMENT_TOKEN_TO_BE_REPLACED

Depending on who you read or listen to, either Islamophobia simply isn’t real, or it’s not as pervasive as people think it is, or sometimes it’s a legitimate criticism, but it’s often used incorrectly to shut down someone legitimately criticising Islam, or else it’s just some word (without any legitimate meaning) that people use to shut down conversations. To which I say: bullshit. I have to grant, of course, that there is possibly some people out there do these things, but I have to admit that I haven’t actually seen any of them. Even in articles where these claims are made, no evidence is provided.

Most often, people who haven’t ‘picked sides’ in this particular debate are left wondering what this term means, exactly. So I’m going to sketch out what I think it means, and how I see it used (which are, oddly enough, the same thing). Note that ‘what the term means’ isn’t the same as ‘what the word is defined as’. END_OF_DOCUMENT_TOKEN_TO_BE_REPLACED

Just dropping a note here to say that I am, in fact, not dead. Lot of irons in the fire at the moment, and writing has been the lowest on my list of priorities. Am currently working on something rather large, so expect that in a few days. My apologies to anyone for whom this blog is a daily read for interrupting your routine. 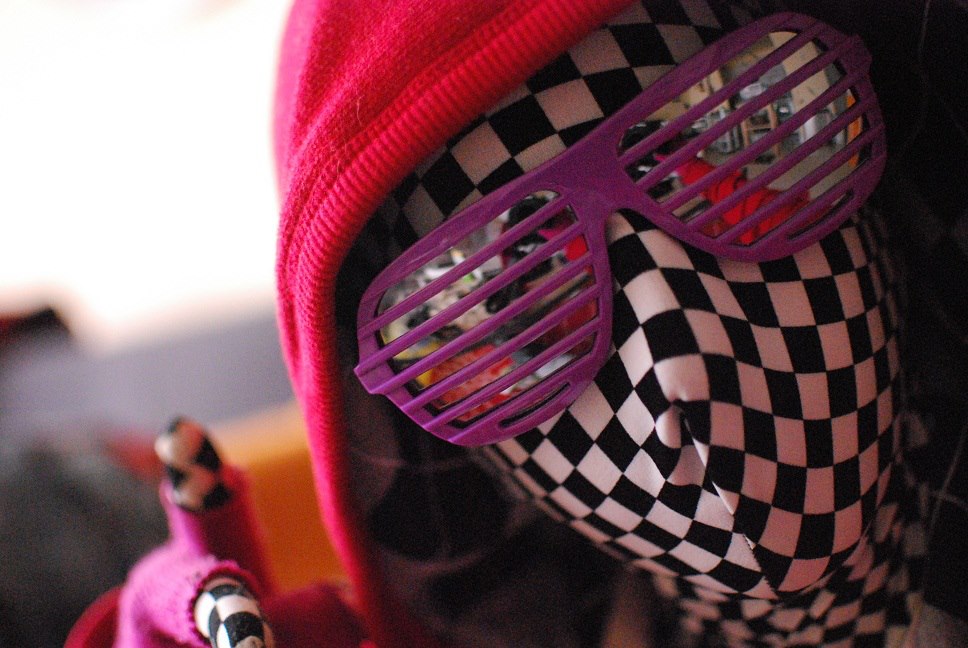 This past week, the United States has experienced a horrific series of civil rights violations: the Boston Marathon bombing, followed by the lockdown of the entire city under martial law (during which several civilian homes were burst into with military might, in SWAT raids searching for one of the suspects, both of whom were considered armed and highly dangerous), and the passing of a bill (CISPA, or Cyber Intelligence Sharing and Protection Act) that allows the United States government to monitor traffic on the internet at its whim and fancy. And that’s not just American citizen’s internet traffic — that includes monitoring of non-Americans accessing US websites too. Canadian civil liberties organizations have asserted that this is very likely to result in further violations of Canadian citizens’ civil liberties as a result (e.g., extradition to the states for alleged “cyber crimes” against the US government).

Also this past week, I observed someone on my Facebook comparing the Boston SWAT raids to the Nazi invasion of Poland and rounding up of Jews at gunpoint. And to my utter shock, not one but two philosophy dudebros came along to defend this individual, on the basis that they think my emotions have clouded my ability to think critically about this outrageously offensive comparison (which directly equates Jews to terrorists, no matter which way you attempt to slice that). This post is going to get personal.

Concern troll warning: Take your “reverse sexism” claims right now and stuff them where the sun doesn’t shine—unless you’re homophobic, in which case, get ready to chew and swallow. If I could literally force-feed it to you, I most certainly would not hesitate.

END_OF_DOCUMENT_TOKEN_TO_BE_REPLACED

Our beleaguered and religion-soaked cousins south of the border may, from time to time, look northward with envy at Canada’s largely non-religious civil society. Our politics are not replete with the same invocations to the intercession of the supernatural that plague the American landscape; indeed, it is considered somewhat gauche in most circles to make large public shows of one’s private belief. Canada’s approach to religion is largely a ‘live and let live’ one, with the exception of certain rural areas where religious affiliation is held in the same grip as one’s self-identity.

As I’ve discussed at various points in the past, this laissez faire approach to religion has not stopped the Republican North government of Stephen Harper from deciding that Canada’s international role should be to protect religious freedom, despite the repeated warnings of those American officials who have tried the same and realized what a mine-field it becomes. An entirely unnecessary ministry has been created in order to oversee Stephen Harper’s desperate attempt to look after the evangelical base that he needs to be re-elected, but whose actual priorities (destroying women’s health care, legislating Biblical morality) he cannot espouse for fear of triggering a centrist backlash.

Yesterday, while discussing this mission, MP Scott Reid had this to say: END_OF_DOCUMENT_TOKEN_TO_BE_REPLACED

One of my favourite standup comedians is a guy called Hari Kondabolu. He talks about race from a non black/white standpoint, and does so in a way that is consistently hilarious. Yesterday, he Tweeted this: 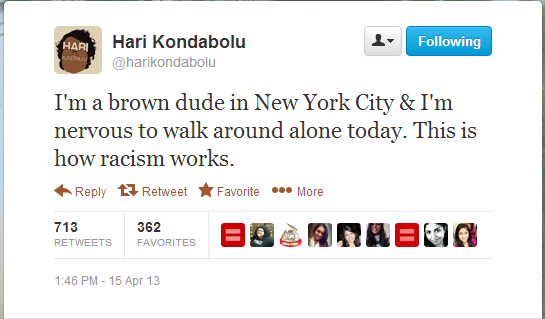 “I’m a brown dude in New York City & I’m nervous to walk around alone today. This is how racism works.”

I thought this was a particularly sad commentary on reality for many Asian Americans, forced to pay the price for the ignorance of the violent reactionaries among their countrymen. Hari, born in New York, has Indian ancestry, which would (in an even slightly less-insane world) preclude him from being suspected for a crime – a crime whose author we don’t know. However, because those who would reflexively blame “Muslims” for pretty much everything aren’t going to spend a whole lot of time studying the history of India, or devote too many brain cells to the parsing of the likelihood of a random person with brown skin being actually connected to anything unsavoury, Hari’s caution is warranted.

Especially in the wake of how even people who are supposed to be responsible adults are behaving: END_OF_DOCUMENT_TOKEN_TO_BE_REPLACED

As you’ve no doubt heard from countless media sources, two devices exploded yesterday at the finish line of the Boston Marathon, killing two and wounding dozens. No group or individual has claimed responsibility for what appears to be an attack. I am trying to cage my language as much as possible here, for reasons I will make obvious over the course of this post.

Boston is my favourite city in the United States. It is also home to my closest friend, who was thankfully nowhere near the site when the explosions happened (although he had biked the route earlier in the day). Obviously there are no words sufficient to the task of expressing the shock and grief that Bostonians and Americans are feeling today, so I won’t waste much time in trying.

I did get a bit of a taste of it yesterday though, when I wasn’t sure if my friend was okay – standing at a marathon finish line sounds like something he’d be into, and when he didn’t answer his phone a part of my brain decided, despite having zero evidence, that he had been killed. The next half hour was black hell for me, as the thought refused to be shouted down by the voices of reason detailing the 90,000 other places he was more likely to be than at the epicentre of a bomb blast. He was fine. Working in his lab (a logical place for him to be on a Monday), with no phone reception.

That fear, that grief, that terror that was rampaging through my brain and playing fun percussive tricks with my autonomic nervous system, is not something I would wish on anyone – not even whoever is responsible for engendering it in me. END_OF_DOCUMENT_TOKEN_TO_BE_REPLACED

Haven’t done one of these in a while. I have a gig with the band tonight and a solo gig tomorrow at the King’s Head Pub, the place where I got my start in Vancouver. Should be interesting. I also bought a new effects pedal that I am slowly learning to use (so many options, so little knowledge).

I will try to get some electric stuff recorded soon, but until then, here’s a new acoustic cover I’ve been working on:

I mentioned this story briefly in passing on Tuesday, but an atrocity has occurred in Nova Scotia (trigger warning for suicide):

Rehtaeh Parsons had a goofy sense of humour and loved playing with her little sisters. She wore glasses, had long, dark hair and was a straight-A student whose favourite subject was science. On Sunday night, the 17-year-old’s family took her off life-support. Three days earlier, on Thursday night, she hanged herself in the bathroom.

Suicide of a young person is always tragic (of course I would be remiss if I failed to point out that suicide rates are highest among Canada’s Aboriginal youth, and highest in the world among Inuit youth), but in this case the details are particularly gruesome (trigger warning for pretty much everything): END_OF_DOCUMENT_TOKEN_TO_BE_REPLACED