One of the social justice issues that I have become increasingly aware of, as a direct consequence of aboriginal activist groups in North America and Africa, is the issue of colonialism. The fact is that, with only a handful of exceptions, our current geopolitical system carries with it a legacy of colonization by various European powers as they attempted to expand their domain and their powers. Indeed, even our very idea of what a nation is has been essentially cribbed wholesale from the colonial powers. Because we exist in a history and an existential philosophy that was created by the colonizers, identifying colonialism is often quite difficult. Its effects, however, are easy to observe (if not to properly attribute).

Even the most cursory examination of the history of colonialism will stand testament to the fact that religion is a major and intrinsic component of colonialism. During the physical colonization of Africa, Asia, and the Americas, religion provided not only a major source of the justification for the domination of the people aboriginal to that region (i.e., the need to ‘Christianize’ and ‘save’ those people), but informed the mechanism of action (e.g., foreign missionaries, residential schools, destruction/adaptation of local religions/customs). It is not possible to understand religion without understanding colonialism, and vice versa.

Which is why this ‘contribution’ from atheist standard-bearer Dr. Richard Dawkins was so ill-conceived: 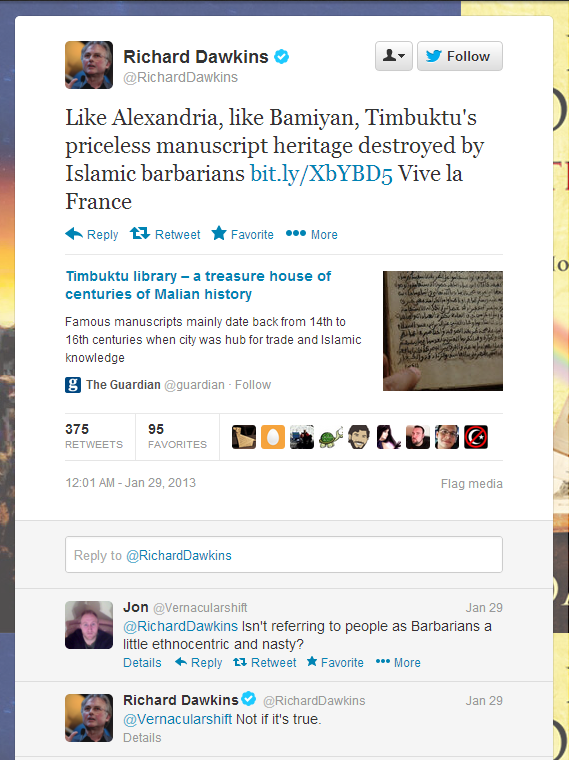 Once again, granting the most gentle and generous interpretation to Dr. Dawkins, I’m sure what he intended to note is that the act of destroying documents that are hundreds and thousands of years old is an act of barbarism. The people who destroyed these manuscripts were, in fact, Muslims, who destroyed the documents for reasons that were justified under their interpretation of the tenets of Islam. These two true facts are combined to form the term “Islamic barbarians”.

The problem arises when we consider the term “Islamic barbarian” and the tradition of decrying other (i.e., non-Christian, non-European) cultures as “barbaric”, and those people as “barbarians”. The very concept of “civilized” – the opposite of “barbaric” – is run through with colonialism (which is, in turn, run through with religion). The term “barbarians”, like “heathens” or “savages” has been used to justify the wholesale destruction of cultures and human rights. This is not untrue within ‘Islamic countries’ as well – both historically during and after the Crusades, and contemporarily with issues borne of patriarchy and socioeconomic access being simply filed away under “Islam’s fault”.

Had Dr. Dawkins been more aware of the intersection between religion and colonialism, his critique may have leaned far less on the apparatus of colonialist language to make what is ultimately a sound point. In so doing, he may have been able to pick apart his own assumptions about “barbarism” and “civilization” and how those terms have historical antecedents that are rooted in the same religious hegemony that he seeks to criticize.

Or maybe he wouldn’t have cared.

Leaving aside this example for a moment, I want to approach the intersection of colonialism and religion from ‘the other side’:

Mark MacDonald: These are all good thoughts. I would add one or two: The relationship with the land is God-given and necessary for a good life. To grow in the good life, in morality and spirituality, is to grow in the beneficial relationship with God and creation. This is demonstrated by the way we call male elders Akiwensi – meaning that they care for the Earth.

This means that the relationship with creation, with the land, is a moral absolute. It cannot be eclipsed by other considerations. The way in which economics has become morally absolute is dangerous to all human beings and all creatures. It seems to me that Idle No More is helping to remind us of this vital fact of existence.

The above is part of an exchange over the religious underpinnings of the Idle No More movement. From my own (horrendously flawed) understanding of aboriginal spirituality, there is no meaningful philosophical separation between the people and the land. The people are on the land and of the land, which has led to the conflict between colonial ideas about land and its use and the philosophies of the original people. That being said, much of this philosophy is inherently tied up in non-scientific beliefs* about the relationship between the people, the land, and a Creator or a ‘spirit world’ that does not exist except (under a very generous interpretation) metaphorically.

Is aboriginal spirituality better than Christianity? Insofar as both of them require the suspension of the use of empirical evidence in favour of ‘revelation’ and other non-falsifiable forms of ‘knowledge’, they are both wrong (and potentially dangerous). Insofar as one is humanity-affirming while the other is humanity-vilifying, they are not equally harmful. Can we arrive at an understanding of custodianship and affinity to/oneness with the land without relying on supernatural narratives? I would suggest not only that we can, but that this is a better way to understand our place in the world – without the need for gods and those who would attempt to convince us that they uniquely understand the wishes of those gods.

Without the awareness of colonialism and the way in which religion suffuses it, we run the risk of making what I will charitably call ‘blunders’ of the kind that Dr. Dawkins made in his tweet. Without understanding the dangers of adhering religion to our governing political principles, anti-colonial groups run the risk of committing similar errors to those whose systems they (righly) criticize. In either case, the lack of facility with understanding religion as a social justice axis will result in communities making statements and following beliefs that are strongly at odds with reality, thus dooming them to irrelevance.

*I am wading into my own morass of colonialist language here, since ‘science’ is a colonial way of understanding the world as well. The difference between science and Christianity (or any faith) is that science is demonstrably true and useful.