This is part of a series of articles intended to illustrate the usefulness of treating atheism as a social justice issue, rather than trying to wall atheist discourse off from social justice discussions. Read the introductory post here.

As I intimated in the panel discussion of masculinity we had last weekend, the fight over women’s access to contraception was a particularly illustrative example of the existence of gender oppression at the expense of women. No moment was more visually perfect than what occurred in a panel about the right of religious organizations to deny insurance coverage of contraception to their employees. This image is forever burned into the feminist discourse: 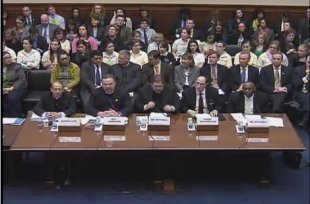 “The uter-what? That’s where the irrational emotions and original sin come from, right?”

But that image, hilarious though it may be, typifies a reality for women in America that is anything but funny:

While a few rational courts have recognized that the Religious Freedom Restoration Act (the federal law the companies are using to challenge the benefit) “is not a means to force one’s religious practices upon others” — duh — eleven companies so far have received temporary relief so that they can breathe easy and keep imposing their religious beliefs on their employees as they pursue their claims in court. No rest for the weary (bigots), as they say.

A few choice quotes from the article, describing the statements of the companies, justifying why they should not have to provide their employees with medically-necessary health care coverage:

A Pennsylvania-based wood cabinet and specialty products manufacturer run by Mennonites who think some birth-control products such as Plan B are “sinful and immoral” and “an intrinsic evil and a sin against God.”

The Kortes “are adherents of the Catholic faith” and “wish to conduct business in a manner that does not violate their religious faith,” according to the suit.

The founders say they embrace the belief embedded in Triune’s mission statement that each individual be “treated with the human dignity and respect that God intended” and that the contraceptive mandate imposes a “gravely oppressive burden” on their religious beliefs.

Yet, the men argued that they are devout Catholics who are “steadfastly committed to biblical principles and the teachings of the Catholic Church, including the belief that life involves the creative action of God, and is therefore sacred. Lind and Janas therefore believe that any action which either before, at the moment of, or after sexual intercourse, is specifically intended to prevent procreation is an evil forbidden by God.”

The atheist critique of this stance is clear: employers do not have the right to impose their religious beliefs on their employees. The right to freedom of conscience means that you are free to believe as you like, and cannot be punished by government for expressing an opinion or holding a belief. It does not, however, license you to require others to respect or abide by your belief, no matter how deeply held that belief may be. By requiring employees to comply with the beliefs of their employers, those employers are actually violating the ‘freedom of religion’ of their employees – those employees may or may not choose to purchase whatever they like with their insurance, and it is not the employer’s place to throttle access or otherwise involve themselves in health care decisions.

The feminist critique of these statements is equally clear: women are people with full bodily autonomy and should be allowed to make their own health care decisions. Employers (most of whom mentioned are male, probably for reasons that could be the subject of a whole other feminist critique) should not be empowered to make reproductive choices for their employees, as it violates the principle of autonomy. Deciding that access to contraception is justified, but that access to other things that might violate “deeply held religious beliefs” – any judge would strike down a mandate saying that employees weren’t allowed to buy meat on Fridays with their salary – are likely grounded in misogynistic and paternalistic attitudes about the role and ‘purpose’ of women.

Both of these critiques are valid. Neither critique is sufficient.

Christianity, like other Abrahamic religions*, is patriarchal. It places an explicitly male god at the pinnacle of creation. It creates a hierarchy that places men above women in terms of who is ‘meant to’ lead and have authority. It holds up reproduction as synonymous with femininity. It ascribes rigid gender roles. And above all, it lends the weight of the almighty to its claims, making a failure or refusal to comply with its rigidly- and narrowly-cast strictures a “sin” – a rejection of all that is good and moral and right in the world.

The ‘mere’ atheist can see that these pronouncements are based on facts not in evidence – there is no god, so while a prohibition of contraception might be justifiable on some grounds, religion is not one of them. Conversely, the ‘mere’ feminist can see that the pronouncements of Christianity are run through with misogyny, that doesn’t necessarily mean that there’s anything really wrong with the religion. The feminist atheist, however, recognizes that both of these positions are so illogical as to be absurd: the presence of misogyny in Christianity acts as a ‘fossil record’ that shows the manufacturer’s signature – humankind.

So to suggest that atheism and feminism are things that must be kept separate, or even ought to be kept separate, is to insist that the atheist community refuse to equip itself to respond meaningfully to situations like this. It is to intentionally blind ourselves to relevant details in criticisms of religious oppression of women. It is to require, for no justifiable reason, that atheists be completely useless to propose meaningful and useful solutions to problems, and thus be rendered irrelevant by our own belligerent insistence.