One of the most frustrating aspects of being involved in a social justice movement is coming to grips with the sheer scope of the problem. Social inequalities are grounded, more often than not, in centuries of history and the evolutionary detritus of human cognition. We can point to a handful of successes like the American civil rights movement, but those were foughts that people literally bled and died for, and resulted in a system that almost immediately adapted to restore as much of the racist status quo as was legally permissible. The fact is that the fight for equality is gigantic, and it’s easy to feel as though one person can’t do much to move the massive edifice the dictates the roles of various groups in power dynamics.

Indeed, even if one wasn’t so overwhelmed by the sheer scope of the problem, it’s hard to conceive of what actionable solutions are available. The whole Occupy movement was heavily criticized for even trying to get together and spell out all of the problems. When solutions were offered (and they were offered), their very existence was denied or ignored because it fit into the more easily-digested narrative that we live in a world where people cannot solve big, diffuse problems. Certainly those who are sincerely interested in, say, seeing the end of racism can see few avenues toward true progress: the problem is inside people’s heads. How can we fix the ever-warping landscape of human psychology aside from waiting for the ‘racists’ to die off and hope that the next generation does a better job?

While I agree the task is daunting, there may be one specific lever we can exploit:

The quest for a state that “looks like America” is understandable, but the reality of lived life is more complex. And not just in racial terms (e.g., the division in politics between the white suburbs of Maryland vs. Virginia on either side of D.C.). But keeping race in mind, one consistent finding in social science is that Americans actually tend to overestimate the number of minorities. Iowa is actually more typical than we think, despite the fact that it is not typical. In the year 2000 the General Social Survey asked respondents to estimate the number of various groups in the USA. The finding of a tendency to overestimate minorities, and underestimate non-Hispanic whites, was confirmed. But, I decided to break this down by demographic. The results are below in a table.

The first row are real counts from the 2000 Census. All the following rows are average estimates of a set of respondents in the year 2000. 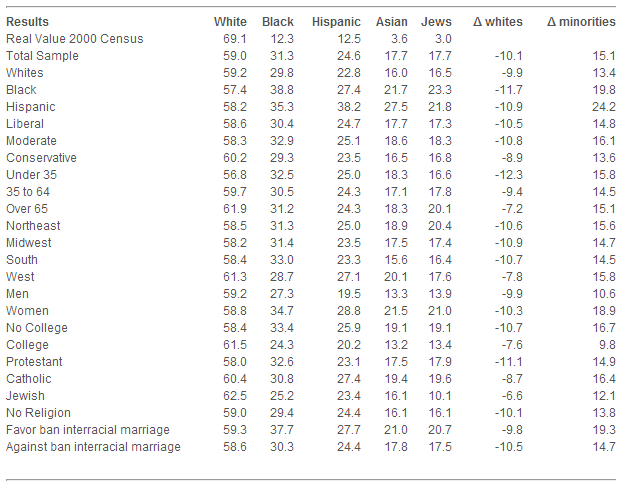 The way to read the table is to look across the rows of respondent groups to get a summary of what the average person estimates the proportional size of the other groups to be. The top row gives the actual proportions from the 2000 census*.

So the thing that should immediately jump out at you is just how wildly inaccurate the estimates are. If you look at the ‘Total Sample’ row, the average American believes that ze lives in a country that is 59% white, 31% black, 25% Hispanic, with the remaining 36% evenly divided between Asians and Jews. Those math wizards among you will probably have noticed the most glaring part of the error – that’s 151% of the actual population. Some of this, to be fair, could be double-counting of people who identify as more than one race, but none of the minority groups were counted anywhere close to accurately.

The thing that jumped out for me, simply because it went quite strongly against my a priori guess, is that there doesn’t really seem to be much of a relationship between race and the accuracy of estimates. I thought perhaps that members of minority groups would have a better picture of what percentage of the population was represented by each group, but that doesn’t appear to be the case. If anything, it looks as though black and ‘Hispanic’** people tend to overestimate their own numbers, an effect not seen in white respondents. One potential explanation is that segregation within minority communities leaves people with a skewed idea of how many people who look ‘like them’ there are in the country at large, but I have no ready explanation for why white Americans would underestimate their numbers. It’s also worth noting that young Americans were the ones who got it the most wrong, and yet their attitudes are the ones that are, demographically speaking, closest to ‘right’ when it comes to eradicating racism.

Whatever the explanation of the findings, one thing is clear: the United States lacks basic demographic knowledge of its racial makeup. Is it so hard to imagine therefore why ‘the welfare state’ is conflated with black and brown folks (and the image of Mitt Romney’s 47%) when the country believes itself to be more than twice as black and brown as it actually is? Would we see the cities and suburbs differently if we understood just how racially divergent those two different types of communities are? What lessons can we learn from the fact that everyone seems to think that America is less white than it is – does that relate somehow to the finding that white Americans feel that anti-white persecution is more prevalent than anti-black persecution?

Here is one of those rare opportunities to do something that is easy, obviously fact-based, and can trigger some critical analysis of race dynamics: ask people to guess how many people of colour there are in the country. This is a question that clearly needs consciousness-raising, and regardless of where the conversation goes next, having more facts can’t be a bad thing.

*It is undoubtedly the case that these numbers have changed away from white statistical domination in the 12 years since the 2000 census. You can see more recent figures here.

**A problematic term, since Hispanic etymologically means ‘from Spain’, which is a gross misrepresentation of the descendants of those Central and South American countries whose families are indigenous to the region rather than descended from Spanish colonizers.