*UPDATE 2014/02/14 – I was contacted by one of the subjects of this piece, asking me to take it down because “the internet takes things out of context”. Ordinarily that kind of weaksauce pleading doesn’t cut it with me, but I can make the argument in this post without using his name, and he has to use his name to get jobs and such. I have deleted it from the body of the text and from the comments. It is still present in the screencap of the tweet though, because seriously fuck that guy.

Sometimes the world does your job for you. 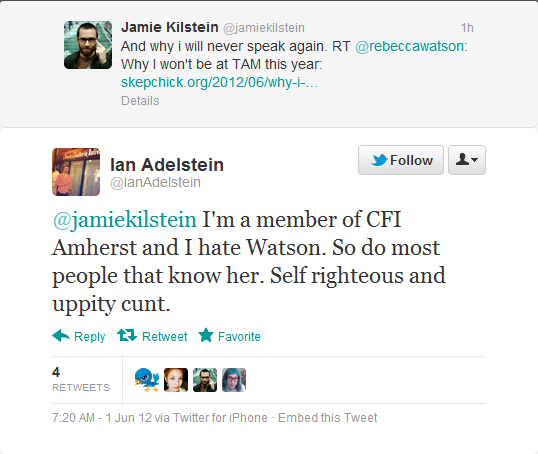 So one of the most fun aspects of male privilege is that I can look at stupid bullshit like this and laugh. First of all, Ian A*** isn’t a member of CFI Amherst, he’s just a douchebro with a big mouth. But hey, that’s one of the hallmarks of douchebroism – a ludicrously inflated sense of self-importance. Because I’m a guy, I get to look at words like ‘cunt’ in purely anthropological terms and pick apart the various types of ignorance and privilege that would lead someone to make that word choice. Of course, Mr. A*** immediately disavowed any sexism in his tweet: see, there are a lot of things he could have meant by ‘cunt’. He might have been calling her an old old wooden ship from the civil war era! Words can mean anything! I guess he’s relying on the assumption that we’re all as stupid as he is. 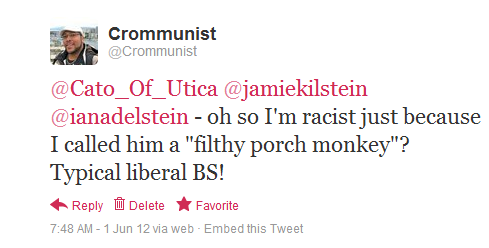 The word ‘uppity’, however, is not one that I can view in purely technical terms. There’s no dark humour in the assumption that women are inherently inferior and should know their (subservient) place in the world. As a fellow member of a group against whom the term ‘uppity’ is often used (and often followed by threats of, or actual, violence), Mr. A*** is talking directly to me as well. The fact is that anyone who is going to use language like that betrays not only their own privilege, but a frightening attitude of entitlement at the expense of others – not because he’s done more than Ms. Watson has, but because he’s a dude.

Of course, the problem isn’t just that he used the word ‘cunt’ and ‘uppity’. That’s bad enough, but it’s the shockingly unabashed hatred on display that bothers me the most. He not only thinks that Ms. Watson is ‘uppity’ for pointing out the myriad of sexist problems within the freethinking movement (of which he is undoubtedly one), but that it is entirely reasonable and justifiable of him to point out her grievous breach of the natural order to a prominent atheist personality. He’s a man, and therefore his contribution, no matter how marginal, is more important that that of one of the most vociferous and valuable forces for feminist equality within the movement. Her refusal to knuckle under to the prevailing winds of misogyny is an affront to his belief that men should rule the roost, and that if women want to be a part of things, they ought to keep quiet and learn to adapt.

The problem isn’t the words. The problem is the unspoken attitude that accompanies them. It’s not the words that are keeping and/or driving people away from organized skepticism. It’s the fact that you’ll face that kind of thought process simply for the arch crime of existing and having an opinion. Nothing Rebecca Watson has said or done is any more abrasive or unwelcome than the stuff that Lawrence Krauss or Sam Harris have said*, and yet she’s an uppity cunt for saying them. That’s the problem.

Of course, because they can’t fucking help themselves, the worms crawled out of the woodwork to showcase their own stupidity 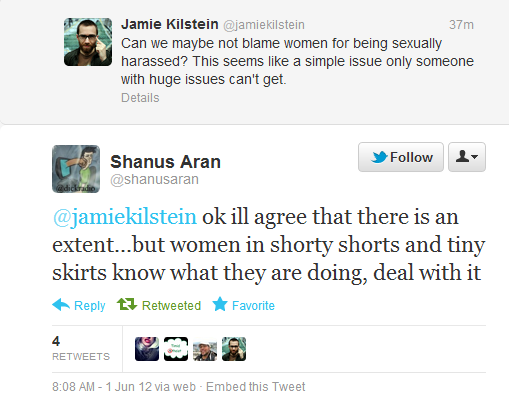 Yeah, Shanus! You’re absolutely right! Also, WHY ARE THERE STILL MONKEYS? Answer me THAT, Mr. Fancypants ‘I actually understand things because I’ve studied them’!

But it was the following one that absolutely took the cake for me: 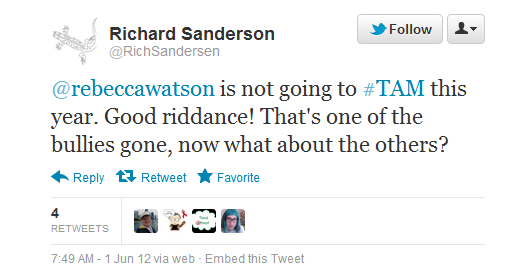 Which led me to ask if anyone besides me saw the obvious parallel between someone calling Rebecca Watson a ‘bully’ for speaking out against sexism and harassment, and people who cry “Christian persecution” every time they’re not allowed to rename City Hall “Jesus Hall of Jesus City Jesus”. No answer was forthcoming, but I was treated to this gem: 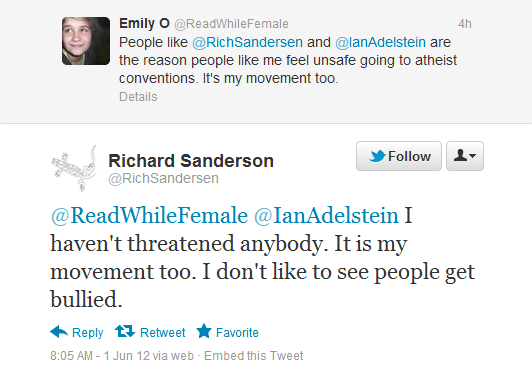 And there you have it folks – the privilege of the oppressor more or less laid completely naked. “Waaaah, you’re telling me I’m not allowed to be openly and blatantly misogynistic to people! You’re a bully! It’s my movement too!” This is the same spirit that invokes the term “reverse racism” any time a person of colour points out a way in which they are systematically disadvantaged by white folks. It’s the whine of the petulant child who is punished for being a little shit, and cries about how “unfair” it is that, while ze was not necessarily punished for hir wrongdoing before, ze’s getting a time-out now.

That’s what we’re dealing with, by the way. Whether it comes as religious “persecution” or “reverse racism” or oppression at the hands of the “Galiban”, we’re dealing with the same thought process that a child goes through. It’s not reasonable, it’s not acceptable, and it’s not right, but it is powerful. People who have never had to examine their behaviour before are not good at it. They will always fall back to identically stupid positions that are as predictable as they are worthless. We have seen the enemy, and it is not that bright.

The silver lining of this cloud of bullshit is that people on Twitter immediately and enthusiastically leapt all over these assholes, giving Ms. Watson some backup that I’m sure she appreciated. The movement still has its problems, to be sure, but I’d like to hope we’re getting better.

*Not that I’ve heard her say anything as off-the-wall stupid as Drs. Krauss or Harris. I hold them up merely as examples of people who have made controversial statements.

The darkness before dawn » « Movie Friday: All Along the Watchtower