My academic background is in epidemiology and biostatistics. Briefly, epidemiology is the study of the interaction between potentially causal external factors and human health, usually at a population level. So, when someone tells you that BPA causes cancer, or that wind turbines or wi-fi signals don’t cause illness, they are speaking in terms of epidemiology. Because of the diffuse nature of many cause/effect relationships and the difficulty of measuring historical exposure, epidemiology is often looked at as a ‘soft science’, which is perhaps a fair charge – we do not deal in certainties; only probabilities.

One of the fundamental concepts that it is necessary to understand in epidemiology is the concept of ‘confounding’. Most of you are likely familiar with the maxim “correlation does not necessarily imply causation” or some permutation of that phrase. Many relationships that may seem causal are better explained by the involvement of a third variable. The classic example is coffee and lung cancer – there is a statistical relationship between frequency of coffee drinking and incidence of lung cancer. However, it would be wildly inaccurate to say that coffee causes lung cancer; what is actually happening is that many people have a cigarette with their coffee, and it is the smoking that causes the cancer. The presence of the third variable (smoking) explains the seeming relationship between the other two.

The important fact to remember here is that when we are able to ‘control for’ confounding (use statistical techniques to eliminate the effect of the confounding variable), we often see the relationship between “E” and “D” disappear entirely. This is how we are able to rule out erroneous explanations for various health problems, and separate the useful causal mechanisms from the spurious ones. Because human health (outside of infectious disease) is often incredibly complex, we often find that the strength of the statistical relationship (the technical term is ‘effect size’) diminishes as confounders are found and dealt with.

We have a strong personal motivation to see ourselves as rational people. After all, irrationality leads us to make supremely poor decisions, and that could damage our self-concept. Consequently, we often “find” rational explanations for our opinions that may in fact be based on wildly illogical or specious premises. For example, we commonly observe this relationship:

Some behaviour (for example, being assertive in workplace) results in an outcome (earning respect of superiors). We see it all the time, and have no problem explaining the relationship – people respond to effective, forceful communicators and people with a strong backbone. So when we see a very different situation, where outcome Y’ (dismissal by superiors) is the result of the same X, we have a difficult job ahead of us. How do we resolve this seeming conflict? One way to do this is to say that the relationship doesn’t exist; this is difficult, however, since we have many examples to back it up.

Well, we think, maybe what we see as X isn’t actually X. Maybe the person isn’t being assertive, so much as… I dunno, pushy. Or they are exhibiting assertiveness in a way that does not comport with expected social norms. Maybe they’re being… what’s the word… 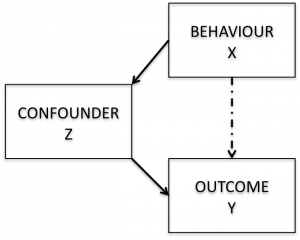 It is common to observe identical behaviours (promiscuity, forthrightness, stupidity) result in wildly different outcomes for men than they do for women – affectionately known as the “double standard”*. We resolve the cognitive dissonance by rebranding X to something else (sluttiness, bitchiness, ditziness). Those are all inherently negative things – it’s just a weird coincidence that they’re slanted heavily against one specific gender. This coincidence, of course, becomes much less coincidental when we are mindful of confounder Z (sexism).

In the same way, we often see some behaviour X (standing on the street corner) associated with some outcome Y (nothing). So when we observe some kind of  disturbance to that natural relationship (Y’ – being stopped and searched by police), we search for rational explanations. Maybe everyone gets stopped in this neighbourhood because of a high incidence of crime. Maybe the stops are random and this particular group of people is just supremely unlucky. Or maybe they’re doing something different. Maybe they’re making some kind of telltale movements that are… what’s the word…

When we factor in our confounder Z (racism), it is far easier to understand why young First Nations or black youth are consistently harassed by police for the arch-crime of existing on public property. We always find explanations, for sure, but those are often post-hoc rationalizations of an X-Y relationship that is more fiction than fact. When the dropout rate for aboriginal students is much higher than for white students (Y’), it’s because aboriginal students are lazy (X’); not because of mistreatment by teachers (Z) or lousy home environments (Z’). When the black incarceration rate is disproportionate high (Y’), it’s because black people demonstrate less personal responsibility (Y’), not because they (we) are arrested disproportionately (Z) or face systemic discrimination (Z’).

The limitation of this confounding model is, of course, that while we can identify and measure smoking rates (or age, sex, other common confounders), it is far more difficult to ‘measure’ racism per se. There is no Geiger counter for racism (although if we could invent one that would DRAMATICALLY change our society – particularly Fox News). It can only be observed indirectly, by eliminating the effects of other variables – and even then it is bundled in with any number of other unmeasurable forces. We may strongly suspect it’s there, but positive detection is extremely elusive.

The good news, however, is that while we cannot pin down the exact effect size of racism, we can still know it is there. Being aware of the possibility of a confounding effect (whether that be racism, sexism, homophobia, or any  other prejudice) when examining our own behaviour can have the effect of making us question our explanations for any number of X-Y relationships. While we cannot completely eliminate the effect that our confounding prejudices have on our worldview, we can definitely be vigilant about what role we let them play.

* it is in no way my intention to imply that the double-standard only affects women. Men are commonly considered inferior parents, potential rapists, and id-driven nincompoops. The knife cuts both ways. That being said, the most common way of insulting a man is to imply that he is effeminate in some way – that there’s something inherently negative about femininity. The burden of sexism is shared, but not equally.