In light of this morning’s post, I’d like to say a few words (not too many, I promise) about the execution of Troy Davis. For those of you unfamiliar with the case, Mr. Davis was convicted of killing a police officer in 1989 in Savannah, Georgia. The case against Mr. Davis was built on the eyewitness testimony of people who claimed to be there to see the shooting. In the intervening 12 years, 9 of those witnesses have recanted their statements, with some alleging coercion by police. New forensic evidence has been brought forward suggesting that Mr. Davis is not, in fact the shooter. None of that has swayed the appellate courts, who allowed Mr. Davis’ execution to go forward yesterday.

This is a dramatically different situation than the one highlighted this morning, since there are evidently legitimate questions regarding Mr. Davis’ innocence:

A U.S. parole board has denied clemency to Troy Davis, clearing the way for his execution Wednesday in a case that has become an international cause celebre for death penalty opponents. Davis was convicted of shooting dead an off-duty police officer who intervened in a brawl in a parking lot in Savannah, Georgia in 1989, but there was no physical evidence and several witnesses later recanted their testimony.

The thread connecting these two cases, however, is race. Mr. Davis, like Mr. Buck, is a black man. Now, in this case race was not so overtly a factor in the decision to convict or recommend the death penalty. That being said, my point in this morning’s piece is that it doesn’t have to be overt to exert influence. Mr. Davis’ race was a factor in his arrest, in his treatment following his arrest, his prosecution, and his sentencing. While I do not have the resources to demonstrate it, there is often a position of presupposed guilt when a defendant is black, while white defendants enjoy more of the benefit of the doubt.

Greg Laden over at The X Blog illustrates this aptly:

It is especially poignant to see that two young white middle class Americans will be release from an Iranian jail about the same time Troy will take the needle. Not that Shane Bauer and Joshua Fattal should not be release or that they have anything to do with it. It is poignant for another reason. If you were an Iranian government official looking at the Shane Bauer and Joshua Fattal case, the assumption that these to guys are spies would be natural. As a person who has traveled a fair amount in or near bellicose regions, and actually met spies along the way (I even spent a bit of time in prison with a spy in the Eastern Congo) I was never closed to the idea, while in the mean time virtually every American hearing of their fate simply knew that the were innocent of these charges. Young American men hiking on the border of a hostile state could not possibly be spies! Meanwhile, in downtown Savannah Georgia, if the police pick up a young black male for some crime or another, there are a lot of people who will assume he is guilty. Or, worse, not care if he is guilty. It’s the inner city. Young black males are the criminals. A crime was committed. Close enough.

But even with the race question left on its own, there seems to be more than enough reasonable doubt in this case to justify staying execution indefinitely. Troy Davis was convicted without any physical evidence linking him to the crime, and police bullied and intimidated their way into securing a quick conviction. When police wring their hands about how people who live in high-crime areas don’t co-operate with law enforcement, they need to understand that this is why. Police are not there unless they are looking to arrest someone, and are happy (dare I say eager) to run roughshod over the civil and human rights of the people in those communities to make as many charges stick as they can. Never mind justice, never mind professional diligence, and never mind protect and serve.

More bizarrely, the justice system, which is ostensibly supposed to correct for the grotesqueries of police overreaching, seems to be playing right along:

A Georgia appeals panel refused to let Troy Davis take a lie detector test to prove his innocence Wednesday, as the American convicted of killing a policeman nears exhaustion of his legal options hours before his execution. “He requested an opportunity to take a polygraph test yesterday from the Board of Pardons and Paroles, which had previously denied clemency,” Davis’s attorney Brian Kammer told AFP. “Mr Davis’s attorneys had a polygrapher at the prison this morning in the event the request was granted. However, earlier this morning, the Department of Corrections and the Board of Pardons and Paroles flatly denied the request,” Kammer said.

The courts seem to be saying “you’re guilty, Mr. Davis, and we will not let any facts get in the way of that story.” Such is the reality for many people convicted by our courts.

This is why my eyes glaze over and my fists clench whenever people talk about the liberal ‘hug a thug’ mentality (a phrase so mind-numbingly stupid, and a position that obviously had so little thought go into it, that it makes me wonder whether the speaker has difficulty not choking on her own tongue). Justice should be difficult. Justice should be fought for and won only after a campaign of diligence and careful weighing of evidence. The decision to imprison someone, much less execute her, is one that deserves more care and deliberation, not snaps to judgment made for the sake of convenience.

Stories like this make me tired. I’m going to need an otter: 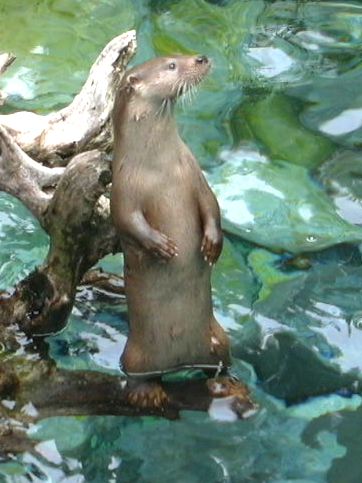 Movie Friday: If it please the court » « Racism: it ain’t yesterday’s problem