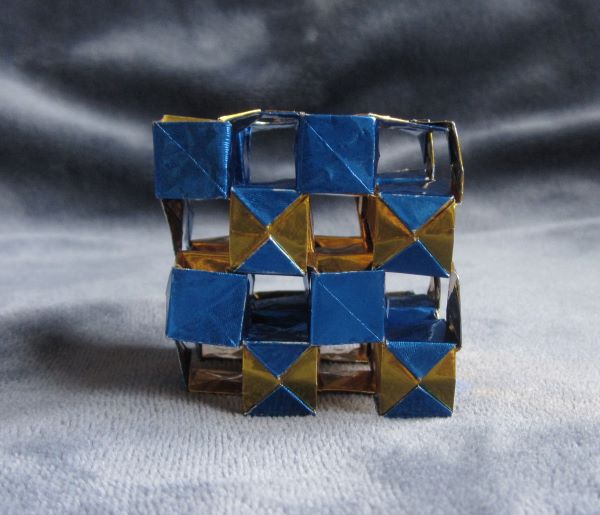 Mucube, designed by me, made out of modified Sonobe units

Someone asked me if this model was based on the Ukrainian flag.  Point in fact, I made this model last year, so it wasn’t.  But let’s say it is now.

This design was inspired by Jan Misali’s video about the 48 regular polyhedra.  The mucube is a series of connected squares that infinitely tile R3. Whether this really counts as a regular polyhedron is dubious… but obviously a great target for an origami design.  I liked it so much that I made two of them.  The other is below the fold.

This is a 4x4x4 subset of the mucube, containing 120 squares.  I used the Sonobe unit, which is a very standard square unit.  But it turns out that’s not enough.  While the Sonobe unit is very stable, putting 120 of them together makes them unstable.  This is particularly true for the shiny foil paper, which is very slippery.  So, I modified the units to have locks, and fiddled with the design of the boundary units.

Then there’s the question of which way the units go.  A mucube doesn’t have an inside or outside, but the Sonobe units do, so you have a choice about which way to orient each unit.  There are distinct symmetries that you can create by flipping the units different ways, and the symmetries also have different structural stabilities.  I came up with two interesting candidates, and the second version of the mucube obeys a different symmetry.  This is all to say, even when using a “standard” origami unit, you can still do very unique and challenging things with it. 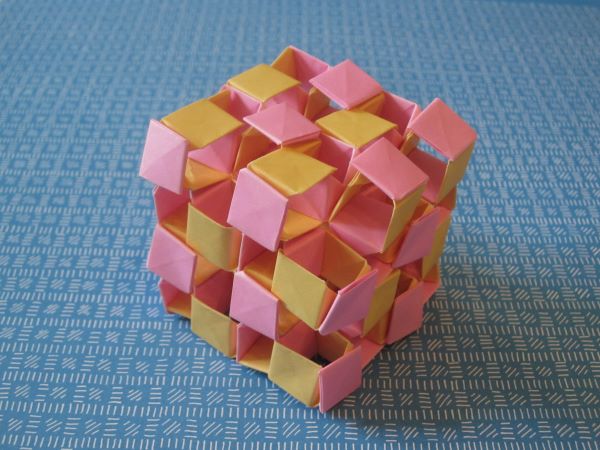 Asexuality in rightwing media » « Why the algorithm is so often wrong