Earlier this year, I played Celeste and Hollow Knight, two critically acclaimed platformers released in 2018 and 2017 respectively. Games critics basically talk about these games all the time, so I knew what they were and I knew they were quote-unquote “good” games. But they’re outside my wheelhouse, in that they are not puzzle or story games. So I only played them recently, and only because my husband bought them for himself.

In both games, I noticed a difference in how my husband and I played. Initially, my husband would play, and then I got interested. I would skip ahead of my husband in leaps and bounds. But eventually, towards the end, my husband got better than me. He would start consistently beating challenges that I could only beat after many tries, and would reach further through the post-game content. What gives? 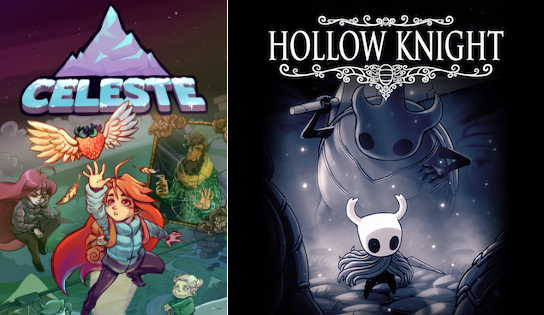 Both of these games present very difficult technical challenges, where you have to input a precise series of moves or react quickly to what you see on screen. They both promote the feeling of mastery once the challenges are complete. They are both very good at what they’re trying to do. Celeste in particular was a favorite for both of us, because instant respawns greatly reduce the friction to achieve that feeling of mastery. But my husband definitely enjoyed them more than I did, and I think it has to do with our different learning curves and learning styles. It may also explain why I don’t care for games that emphasize technical mastery, and go more for those puzzle and story games.

Possibly this could be traced to our respective video game backgrounds. My husband stopped playing video games after the SNES era, and only started again when we started dating. I never really stopped. I’m more “skilled”, in the generic sense, at video games. I complete new challenges more quickly because I’ve seen a lot of similar challenges in the past. But that also means I spend less time with this particular game, and might be less skilled with it by the time we each reach the end.

We could also point to differences in the styles of games during the SNES era and later on. My husband has some fond memories of games we would now describe as “Nintendo Hard”, such as Mega Man 2. These games would have you retry over and over again until you got it right. I was trained on games that had more room for error, but expected you to get it more or less right on the first try. These are two kinds of difficulty, overcome by two different skill sets.

There’s an analogue in music performance. Sight-reading refers to performing a piece of music that you are seeing for the first time–much like a “blind” play-through of a video game. When performers practice a piece extensively, we say that the piece has become part of their repertoire. Ideally, performers are good at both sight-reading and repertoire performance, but it’s quite common for performers to have more difficulty with one than the other. When I played the flute, I was much better at sight-reading, and was frustrated by my lack of progress from practice. This made me unwilling to practice in the first place–which is yet another way you can be bad at practicing!

That’s not a hypothetical. As I’ve already mentioned, I like puzzle and story games. In difficult puzzle games, such as Stephen’s Sausage Roll, Snakebird, or Baba is You, the difficulty really has nothing to do with how many retries you make, or how much practice you put into it. The difficulty is in solving the puzzle the first time, and then subsequent retries are trivial.  (I mean, at least in principle.  I admit I can’t remember how to cook all these sausages.) 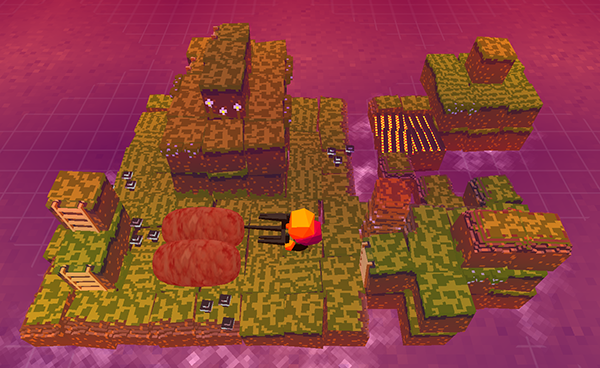 In the niche world of hard core puzzle games, few are as influential as Stephen’s Sausage Roll, but for some reason I never hear people talk about sausage-likes.

Story games also offer a challenge in their own way: the challenge of engaging with the story. Of course, you don’t need to engage with the story to complete a game (usually), and it doesn’t offer much of a subjective experience of difficulty. But for what it’s worth, this is another kind of challenge that is only challenging the first time. You might replay Disco Elysium multiple times to understand more of the story each time, but nobody needs to “practice” until they can understand each story bite consistently.

I’ve always been much better at sight-reading than practicing–in both music and video games. And that affects what kinds of video games I like. Often, games like Hollow Knight do not make me feel like I have achieved mastery, even after I have beaten the game. I know that if I were to try it again, I would still be inconsistent in beating challenges. Is it really mastery, or is it just luck? My muscles went one way this time, they’ll go another way the next time, and I do it all by instinct, I don’t have a lot of control over it.

So these games that supposedly emphasize skill and mastery do not make me feel skillful at all. They make me feel like I’m flipping a coin over and over, only every time I get a bad result it’s somehow my fault and I have to start back at the last checkpoint. So I don’t enjoy these games even when I’m able to beat them. (Or at least, I don’t enjoy them enough to take the initiative to buy them.)

I imagine this is how many people feel about difficult puzzle games. They try things randomly, until something works, and it feels like more luck than skill. But obviously there are differences in the discourse around puzzle games compared to games with technical challenges. If a player gets stuck on some puzzles, nobody will say that it’s because the player hasn’t practiced enough.

I read popular physics: Explosions at the edge » « Origami: Leaf