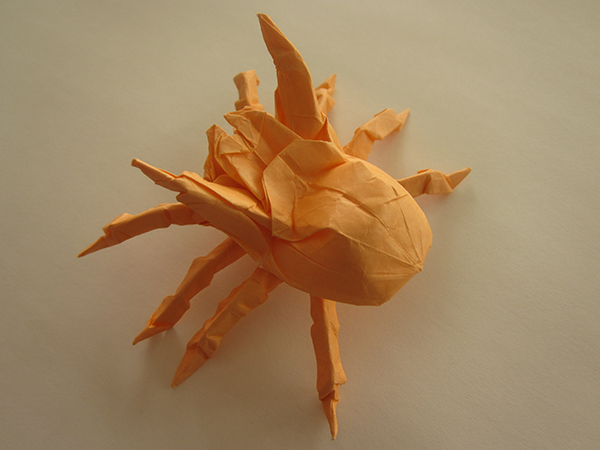 I hope PZ appreciates all the unsinks I needed to do to make this.

An unsink is when you invert a pyramid, changing it from pointing inward to pointing outward.  Often you only have access to one side of the pyramid, so you can’t push it out, you have to pull it.  You can see a sequence of unsinks in this instructional video for the tarantula, timestamp 7:06.  Although I actually thought the hardest fold was pleating the legs, which consist of up to 40 layers of paper.

I just made this last month!  Lately I have been trying out complex one-piece origami models.  I am not as skilled at this sort of origami, and my tarantula doesn’t look as clean as most others on the internet.  That’s fine though–I will get better and return to the tarantula in the future.  (Or maybe next time I’ll just use better paper!)

For fun, here’s a crease pattern for the tarantula.  You may notice that the crease pattern has circles drawn all over it.  The center of each circle gets folded into one of the “points” of the tarantula.  The eight circles on the edges are the eight legs, and the four big circles are the head, abdomen, and… *does a quick google*… pedipalps.  In order to make points of a certain length, points must be at least a certain distance away from each other on the paper–thus the circles.  Origami design at this level basically turns into a circle packing problem.

On panhandlers » « I read about the triple slit experiment