When I say that a theory of dissonance must refer to empirical observation, I do not mean that we simply observe what people say is dissonant, and take that answer as truth. After all, what you consider dissonant might be different from what I consider dissonant. We could instead take a representative sample of the world population and measure the average opinion of dissonance, but this also has problems. On average, the world population has been strongly influenced by the western tradition of music. What we want is a measure of dissonance that transcends individual variation and cultural influence.

To do this, we generate theories of why we have this sensation of dissonance, and use empirical observations to select the best theory. Then we use the best theory to generate a prediction of what the average person would experience as dissonant in a hypothetical world where they were uninfluenced by musical culture. This has been done in a 19651 paper, “Tonal Consonance and Critical Bandwidth” by Plomp and Levelt, which I encountered when I did research on microtonal music.

It is generally agreed that the most consonant musical intervals are the ones that have “nice” frequency ratios–that is, ratios between small integers like 1:2 or 2:3. So that set me to wondering if there was a “most dissonant” interval. I had a theory that the most dissonant interval would have a 1:1.618 ratio–that is, the golden ratio. Roughly speaking, the golden ratio is the irrational number that’s hardest to approximate with ratios of small integers.

It is an elegant hypothesis, but alas, it is not true. Plomp and Levelt disprove it. 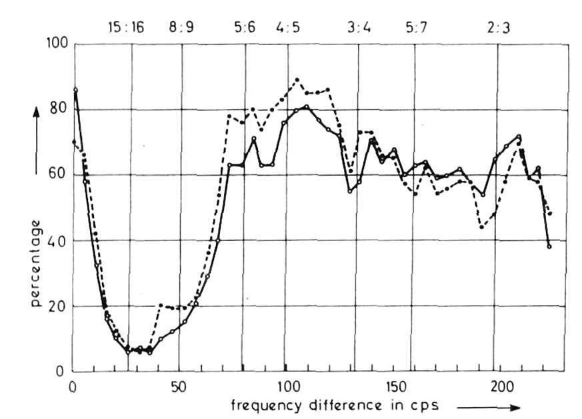 This is Figure 1 from Plomp & Levelt, but the data is sourced from an earlier work by someone else. They performed an experiment where they played a pair of simple tones, and asked subjects to judge which the tones were more consonant (solid line) and more pleasant (dashed line). As you can see, “pleasant” and “consonant” mean nearly the same thing among these experimental subjects.2 And the most dissonant interval is fairly small, near the 15:16 frequency ratio.3 Not the golden ratio.

I should mention that this experiment was performed on subjects without musical training. If we want to understand dissonance independent of cultural influences, then we had better use test subjects who aren’t deliberately trained in those cultural traditions. But this is something that most investigators before the 20th century didn’t understand. They were only interested in experiments on musically trained subjects.

As a result, they missed or ignored a significant fact: above about a 5:6 ratio, most intervals sound about equally consonant to untrained ears, whether they consist of “nice” frequency ratios or not. This conflicts with the traditional western understanding, and also with Euler’s theory. What gives?

A matter of timbre

Earlier, I referred to “simple tones”, and I’m going to have to explain that part. A simple tone is a sound produced by a perfect sine wave. Most musical notes, such as the notes played by a piano, are “complex tones” have many sine waves (harmonics) overlaid on top of each other. The frequency of these harmonics are in a 1:2:3:4:5:etc. ratio. Wikipedia has a nice demonstration of how simple tones can be overlaid to create a complex tone (caution: may be loud). The particular way that sine waves get overlaid is one aspect of the “timbre” of a note (pronounced “tamber”).

So what happens when we perform the same experiment using complex tones instead of simple tones? That is the subject of Figure 2. 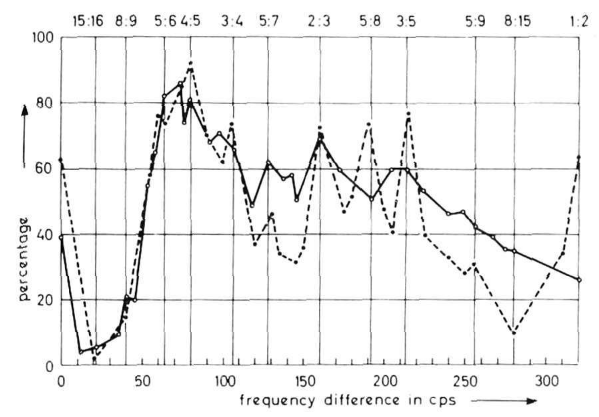 Figure 2 is based on another earlier study, which played pairs of tones for untrained subjects and asked them to judge pleasantness. (The curve looks more compressed compared to Figure 1 but that’s just because of the horizontal scale.) The solid curve shows simple tones, and the dashed curve shows complex tones. So when we switch from simple tones to complex tones, there appear peaks in pleasantness that correspond to “nice” ratios between integers.

I will gloss over the part where Plomp & Levelt discuss other theories of dissonance, and why they fail to account for this data. Let’s just say that Euler didn’t have much of a theory, believing that the “unconsciously counting soul” simply likes concurrent vibrations.

Dissonance and the human ear

Using this knowledge, Plomp & Levelt are ready to make predictions. The following figure shows the prediction of consonance between two complex tones, as a function of distance between the tones. These complex tones include only 6 harmonics, so the function lacks peaks corresponding to, e.g. the ratio 5:7. In the case of realistic musical instruments, the landscape of dissonance would have more of a fractal structure. 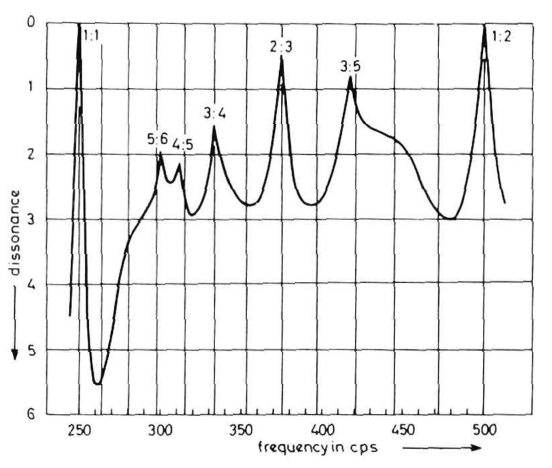 The takeaway is that musical dissonance does not just depend on mathematical frequency ratios, as Euler believed. It depends on the timbre of the note, the absolute frequency of the note, and the properties of the human ear. Last but not least, it depends on your culture and musical training.

1. The skeptical reader may ask whether a paper from 1965 still holds up today. I am not an expert in the field so it is hard to say. However, I found Plomp & Levelt because it was discussed approvingly in the introduction to a 2000 paper by Marc Leman. This suggests to me that Plomp & Levelt has held up fairly well. However, it seems that in modern scholarship, the term “roughness” is preferred over “dissonance”.  I stick with the word “dissonance” to be consistent with the paper under discussion. (return)

4. This echoes conventional wisdom among musicians, that small intervals sound worse in the low registers. (return)

Origami: Life inside » « My free time