The pandemic has given us a crash course on evolution. Evolution deniers must be having a hard time explaining away the evolution-suffused news dealing with mutations, growth rates, and the like. But it also provides an opportunity to explain some of the mathematics of the phenomenon.

You would think that if a mutation had a slight advantage over its predecessor, then it would over time grow in size relative to the other but the older one would still be around. But that is not what happens. We see how some new variant, if it has some advantage over its competitors such as greater transmissibility, rapidly becomes dominant in the population, pushing the previously dominant ones into the background. 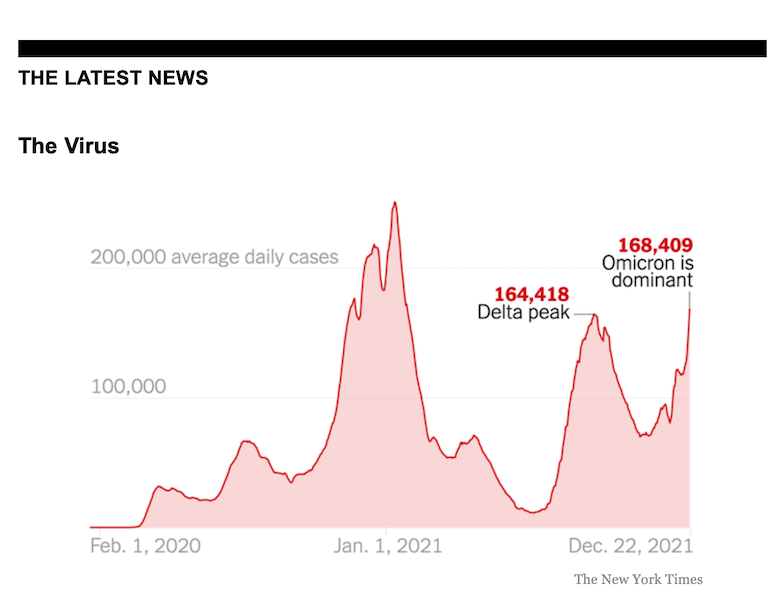 In this graphic from the CDC, we see the rapid rise in the proportion of the Omicron variant (purple) compared to the previously dominant Delta (orange). 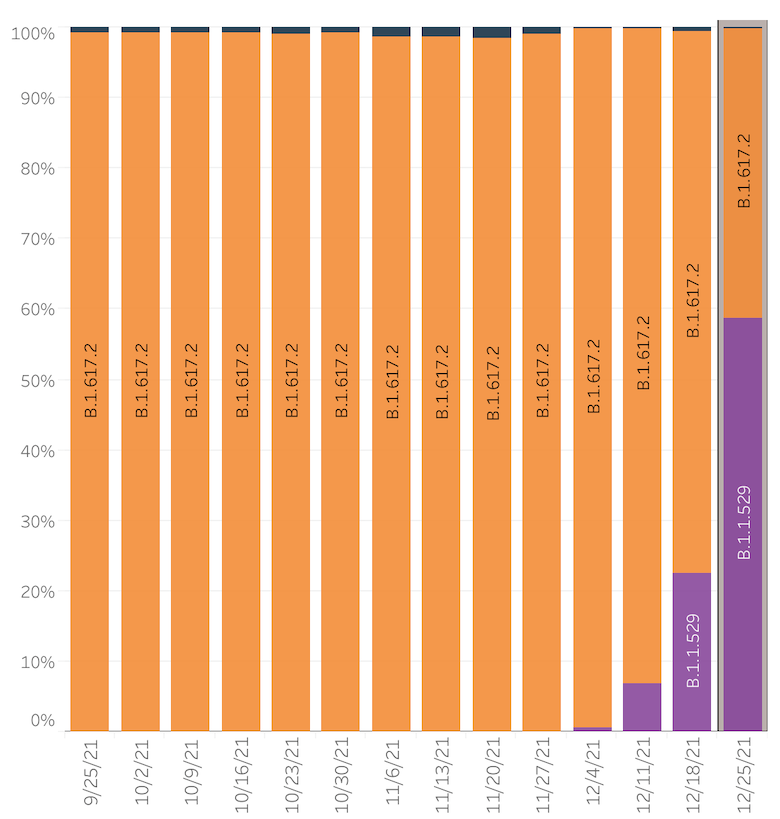 The virus population grows by infecting others. The relevant quantity is the doubling time. For Omicron it is about 2-3 days while that of Delta is 5-7 days. The difference may not seem large but when you are talking about doubling times (or exponential growth) small differences can give rise to large effects. It will not be long before the Delta becomes as negligible as the Alpha and earlier variants that it replaced (the black part in the above figure). It is the nature of exponential or power growth that if something has a smaller doubling time than another, then its numbers will quickly overtake the competitor even if the competitor has a head start in terms of time and numbers.

To see this, the number of viruses N as a function of the starting value No, doubling time T, and time t is given by N=No2t/T. Let’s assume that the doubling time for Omicron is two days while that of Delta is five days. Suppose that at one point in time, the fraction of Omicron cases was just 0.1%, with 99.9% being Delta. In just 10 days, the numbers will be equal and in two months (60 days), Omicron will be 99.9% of the total, completely reversing the initial situation.

The exponential and power functions do not mess around.

The number of Omicron cases right now is soaring in the US. As of yesterday, the seven-day average was 2.1 million, breaking the previous record of 1.8 million set back on January 12th.

The good news is that hospitalization and death rates are not rising at the same pace, growing at a much lower rate. The rising number of cases is ascribed to the greater transmissibility of this variant. So why are hospitalizations not increasing as fast? One speculation is that Omicron does not cause as severe symptoms as the Delta, which would be good news.

But another theory is that it is as severe as Delta and that it also has a greater ability to evade the vaccines. That is bad news. The rising number of cases is ascribed to larger numbers of vaccinated people getting infected, the so-called breakthrough cases. The good news is that being vaccinated does seem to mitigate the effects of the virus, leading to milder symptoms and lower hospitalization rates.

Of course, the idea that Omicron causes as severe symptoms as Delta is bad news for the unvaccinated who have no protection against it.