This article describes how people in some communities are becoming violent in their opposition to schools requiring masks for students and school personnel. What struck me though was the photograph accompanying the article. Notice how the middle school student is stooped over as he walks. 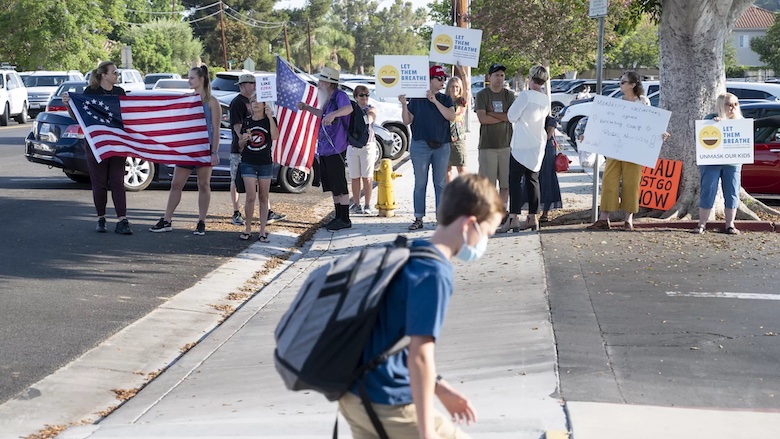 Anyone who has had children go through the American school system knows that a good feature is that the school districts provide students with textbooks so that they do not have to buy them themselves. This is no small factor since publishers charge very high prices for textbooks, especially science ones. But a bad feature is that these textbooks are becoming larger and larger, often because publishers, in an effort to justify high prices, keep adding extra features that, to my mind, just make them more glossy and bigger while adding very little value. The frequent proliferation of ‘new’ editions every two or three years also means that the second-hand market is undermined, further increasing the profits. The situation is even worse in colleges and I used to regularly castigate the sales representatives of the worst culprits who would come to my office to try to persuade me to assign their textbooks in my course, explaining why I would never do so unless they stopped their predatory practices.

What I really want to say is that middle and high school students have to lug their textbooks for multiple subjects back and forth from home to school each day because teachers in each subject would assign homework for which they needed the book at home and would also require them to have the textbook in class. This would result in them constantly carrying heavy backpacks around, which cannot be good for their growing bodies. These children are not army recruits at boot camp who need to learn how to carry heavy loads for long periods.

I remember when my daughter was in high school and taking what was called an ‘Advanced Placement’ course in physics. These are supposedly the equivalent of a first-year college course and, if they did well, could get them exempt from having to take it in college. (My opinion was that these high school AP courses were not equivalent to a good college-level course even though they often used the same textbook.) The students in her high school were assigned the same text as in my college course but theirs was a single, thick, hardcover, heavy book. As a college instructor, I had the same text except that I had ordered for myself the more expensive option where it was split up into five small paperbacks. I remember my daughter delightedly taking the appropriate light paperback with her, depending on where she was in the course, and her friends being so envious of her.

My point is that textbooks have become too damn heavy and students are expected to carry too many of them around.