One thing we should be clear about is that senate majority leader Republican Mitch McConnell could open the government at any time if he wanted to and thus should shoulder a large part of the blame for the shutdown. But he seems to have entered the witness protection program being conspicuously absent from the public eye while the shutdown continues. Remember, the senate unanimously passed a government funding bill in December without wall funding when they thought that Trump was on board with it. Then Trump abruptly reversed himself and said that he would veto any bill that did not have wall funding. Now McConnell says that he will not bring up any bill that Trump will veto, even if it is identical to the one that he brought up and voted for in December. But why not? If Republicans liked the bill so much then, then even if Trump vetoed it, there should be more than enough votes to override the veto and thus reopen the government.

But we all know why McConnell will not do this. Defying the Dear Leader would bring down cries of betrayal from Trump’s Twitter account and unleash the wrath of all his fanatic supporters and McConnell is much too craven to do such a thing.

What puzzles me is that the Republicans controlled both house of congress and the White House for two full years and still did not fund the wall nor was it considered an emergency that required immediate action. They did not try to do it even at the height of the phony migrant caravan scare that took place about a month before the election, when they had the most leverage. Instead Trump and McConnell decide to wait until it is almost hopeless before drawing lines in the stand and taking the government hostage.

One scenario that is being floated is that Trump will declare a national emergency and order the military to build the wall and then declare victory and sign bills funding the government. This will be immediately challenged and if the courts declare that his emergency order is illegal and stop the wall (which is what analysts seem to think is likely to happen), Trump can blast the courts and hope that everyone forgets that his wall is not happening since the government will be open and that crisis averted.

Last night, Jimmy Kimmel gave his reaction to the speech

And this Ruben Bolling cartoon pretty much sums it up. 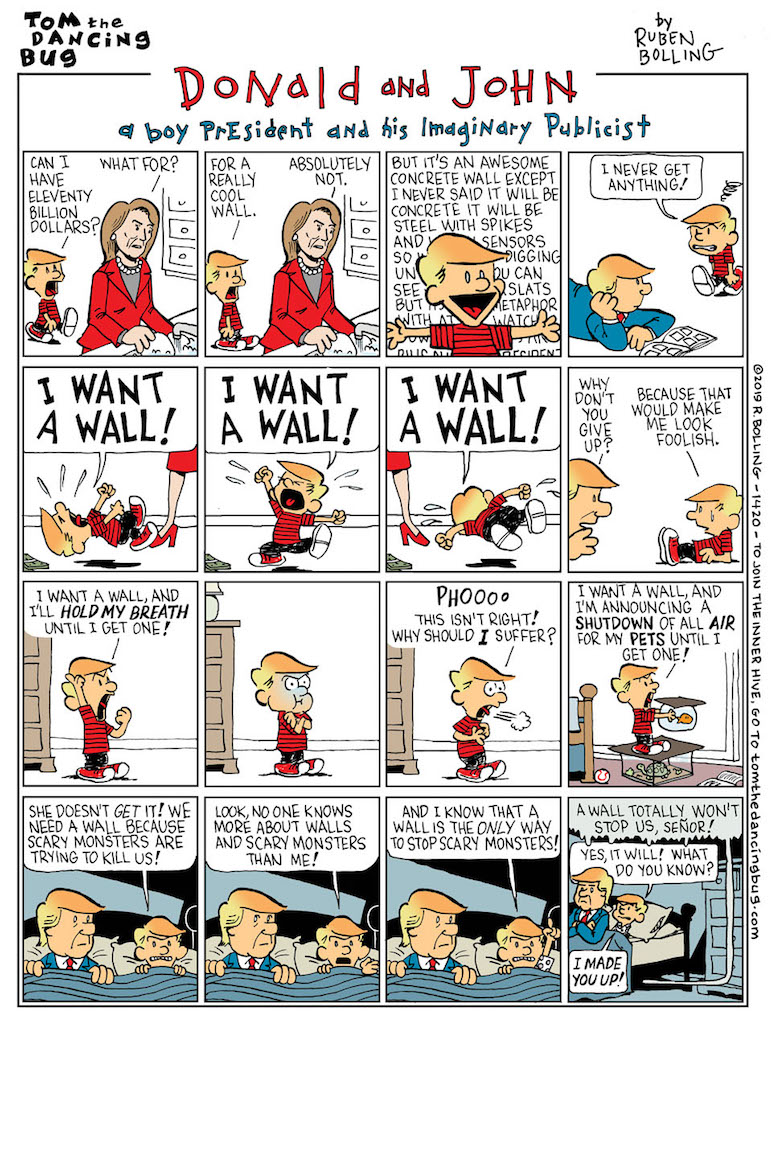 Meanwhile, looking across the Atlantic … » « Trump is losing the shutdown battle and he knows it