One of the biggest puzzles is how some drivers do not seem to realize when they are behind the wheel of a vehicle weighing several tons, they can cause mayhem on a large scale. Unfortunately, it is mainly those who deliberately want to do so that realize the potential that a motor vehicle has as a lethal weapon. An error or loss of concentration can result in the deaths of innocent people. This is why the use of cell phones while driving has become such a menace. That people actually read things on their phone and send and receive text messages while driving is something I find utterly incomprehensible and so I am glad that more and more states are passing laws that issue stiff penalties for doing so.

Even conservative states like Georgia, where regulations by the government are seen as infringements of individual freedom, are cracking down.

As regulators, technology companies and even the most conscientious road warriors struggle with the universal urge to tap out a text or tally “likes” in slow-moving traffic, state and local policymakers are finally homing in on a strategy that works: deep and nuanced legislation, robust publicity campaigns and steep penalties-topped off with a hefty dose of grief for those already lost.

In Georgia, as with much of the U.S., traffic fatalities have spiked in recent years. Representative John Carson, who sponsored the Georgia legislation, whipped up enough votes with some simple math. Reducing the state’s traffic fatalities by 20 percent would save 260 lives a year, the Republican reasoned. “That’s a high-school class,” Carson said before a critical vote in March.

When Georgia Governor Nathan Deal, also a Republican, finally signed the bill into law July 1, he broke down and took a moment to gather himself. “This legislation is Georgia’s way of saying today is the day that we say ‘no more.'” 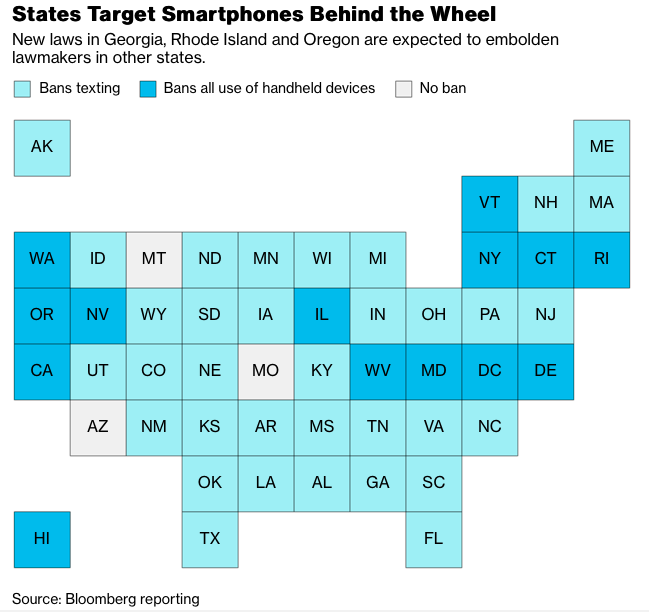 It should be borne in mind that while any use of smartphones that require the use of hands or removing one’s eyes from the road is obviously bad and should not be allowed, studies suggest that even the use of hands-free devices, now a standard feature in new cars, is a cause of distraction. But it looks like the banning of all phone use by drivers will be a hard sell, given how addicted we are to phones.

It used to be the case that a car phone was a status symbol enjoyed by the very wealthy or the very self-important. That is no longer the case obviously but I wonder if there is still a lingering sense that one is important enough that one must always be in contact with others.

When you think about it, it is hardly ever the case that a phone call or text message is really urgent. It can easily roll over to voicemail. I happen to be someone who enjoys driving without the distraction of the phone. If I am expecting an urgent call and the phone rings, it is no trouble at all to pull over to the side and talk. It adds hardly any time to the trip.