Donald Trump has suggested that teachers should be armed with guns to deter killers. Of course, the fact that an actual police offer (and maybe even four) was on site at the Parkland school and did not act shows that having an armed person present is not a solution when there is the ability for any person to buy a rapid-firing weapon that can kill many people in just a few seconds. Teachers are also pushing back saying that they joined the profession to teach people, not to be law enforcement officers.

John Oliver calls out the idea of arming teachers for the stupid idea that it is.

The NRA and Trump give the idea that a teacher could kill a gunman with ease. The video below shows that unlike on TV and in films, in actual life the situation can quickly become chaotic. In this security video footage, an armed gunman robbed a liquor store in Tulsa, Oklahoma. As he was leaving, the mother and daughter who work in the store took out hidden guns and fired at the robber. Look at what happens then. And then imagine this with a room full of schoolchildren instead of bottles.

Martin Cizmar says that the gunman got away but was apprehended later when he went to an emergency room for treatment. 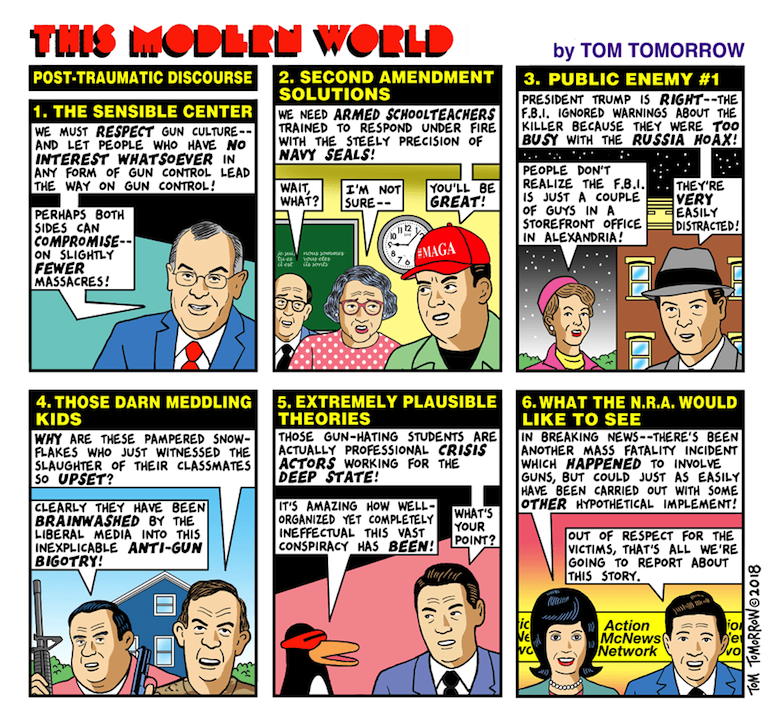 Incidentally, Trump continues his lying boasts by telling a meeting of governors that he would have run into the Parkland school to confront the gunman even if unarmed. That is an obvious lie because I doubt that Trump can run. Also, a person who managed to dodge the Vietnam war draft by claiming that he had a bone spur hardly seems like a profile in courage.