After the November elections, the Virginia House of Delegates is delicately balanced with 50 Republicans and 49 Democrats, a big shift from the 66-34 majority Republicans had before. One last seat is even more delicately balanced because, after a recount, it had 11,608 votes for Democratic candidate Shelley Simonds, 11,607 votes for the Republican David Yancey, and one disputed ballot. After examining the ballot, a three-judge panel ruled that the voter’s intent was for Yancey, thus causing a tie. Here’s the disputed ballot. 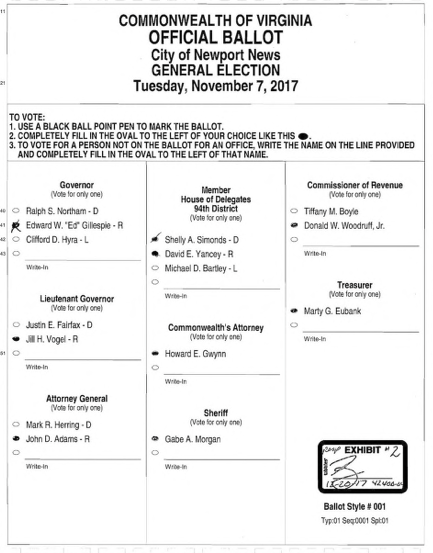 Based on that decision, the board of elections was going to decide the outcome by a kind of lottery and that was to have been done yesterday. But Simonds has sued, saying that the ballot should be declared void because it had both candidates’ names filled in and that the other indicators that suggested it was meant for Yancey should not be relevant. The lottery has been postponed until that issue is resolved.

Meanwhile, Roy Moore has also filed a lawsuit challenging his loss to Doug Jones in the Alabama US senate election, alleging that massive voter fraud should require the holding of another election. His filing came just before the Alabama secretary of state John H Merrill was due to certify the election results this afternoon. Merrill has said that the certification process would continue anyway. Once the result is certified, Jones can be sworn in as a senator on January 3rd.

Moore’s lawsuit is highly unlikely to succeed (it cited ‘experts’ who have espoused various conspiracy theories) but you can be sure that he will file another lawsuit to try to prevent Jones from being sworn in, and that will fail too. His last hope is that his best buddy Jesus will step in and I too am puzzled why Jesus has not done so already. No doubt he is busy with all his birthday celebrations.

While the Simonds case has at least some credibility, the Moore case is totally unrealistic.

There is no such thing as a ‘friendly’ conversation with law enforcement » « Film review: The Thin Blue Line (1988) and the conviction of innocent people