Once again, a person with access to high-powered weapons has killed a large number of people, this time in Las Vegas. What struck me was that this person fired from the 32nd floor of a hotel at a crowd on a plaza below who were attending a country music festival. The fact that there seemed to be only one shooter and yet over fifty people died and scores more were injured despite the shooter being about 400 feet away from them suggests a highly dense crowd and powerful, rapid-fire weaponry. 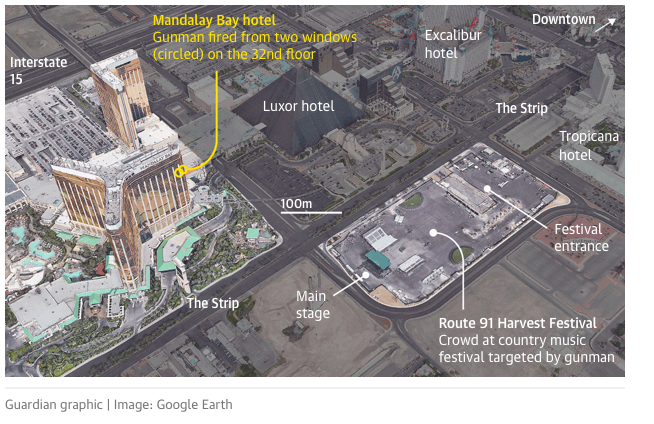 Law enforcement officials have yet to confirm what kind of firearms Stephen Paddock used to shoot from his Mandalay Bay hotel room into a crowd of people at a country music festival in Las Vegas, killing at least 58 people, though early reports suggest he had as many as 10 guns, including some rifles.

The rapid pace of the gunfire suggested that the shooter was using either a fully automatic weapon, tightly restricted under US law, or that he had attached a device to a semi-automatic gun to make it fire more continuously, said Massad Ayoob, a firearms expert, instructor and author.

“It’s faster than almost any human being is going to be able to pull a trigger on a semi-automatic,” Ayoob said.
…

For the Las Vegas shooter, though, the accuracy of these devices would not have mattered, since he was “hosing a two-acre area with 30,000 targets,” nearly every shot he fired would have hit someone.

The shooter is reported to be dead, apparently after shooting himself. Police found at least 10 guns in his hotel room.

Now there will be the usual post-mortems. Gun control opponents will say that this is not the time to talk about gun control (it never is) and will instead send their ‘thoughts and prayers’ to the victims and their families, the only thing they seem to be capable of doing, despite the fact that it achieves absolutely nothing in terms of preventing any future actions.

I have long given up trying to understand the mentality of the people who commit such crimes.