I have always been intrigued by optical illusions, seeing them as providing fascinating insights into how the brain works as well as warnings that what we think we see may not accurately represent what is actually there. I found this illusion (via David Pescovitz) to be particularly intriguing because the contradiction is so stark. You know that the four horizontal blue lines must be parallel because the background black and grey objects are all the same size, and yet to my eyes the top and third line unmistakably slope up to the right while the second and bottom lines slope down. 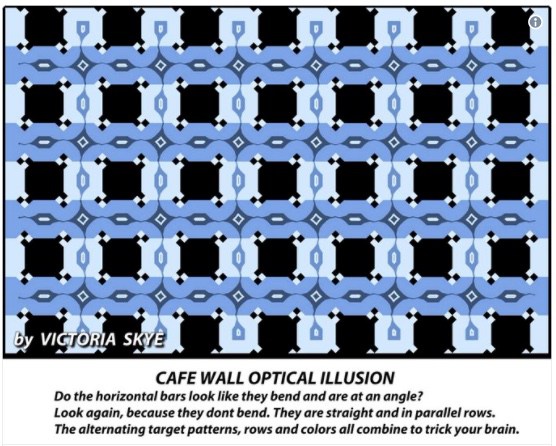 Since all four lines and the background seem identical, why do two lines seem to slope up and the other two slope down? The only thing that is slightly different is in the little squares at the intersection of the vertical and horizontal lines. In those small squares, the two tiny black squares are arranged either horizontally or vertically and this must be what tricks the brain into seeing the slopes.

This illusion is the creation of magician and illusion artist Victoria Skye who has many more at the link.