Based on my experience in driving in Australia and New Zealand, I have written before in favor of ’roundabouts’ (or traffic circles as they are known in the US) as superior to four way stop signs at intersections. But they are not popular here even though there is evidence that they result in fewer accidents.

But I came across this mother of all roundabouts for a very busy intersection in Swindon in the UK that has six feeder roads and seems incredibly complicated but apparently works very well once drivers get used to it. It consists of an outer circle that has five small roundabouts where traffic flows in the expected clockwise direction and a large inner circle where it flows in the opposite direction. (Remember that in the UK they drive on the opposite side to the US.)

In such roundabouts, each peripheral circle facilitates car entries and exits from an associated feeder road. Experienced drivers can traverse the intersection in more direct and efficient ways, saving time. Less proficient motorists may choose to go with the flow, cycling around the edges until they reach their desired exit. For drivers going from one end to the other, a magic roundabout can enable traversals that are up to twice as fast as conventional roundabouts would allow.

The above link provides a gif of what the flow is like for a general magic roundabout but here’s what the traffic flow looks like for the actual Swindon one. 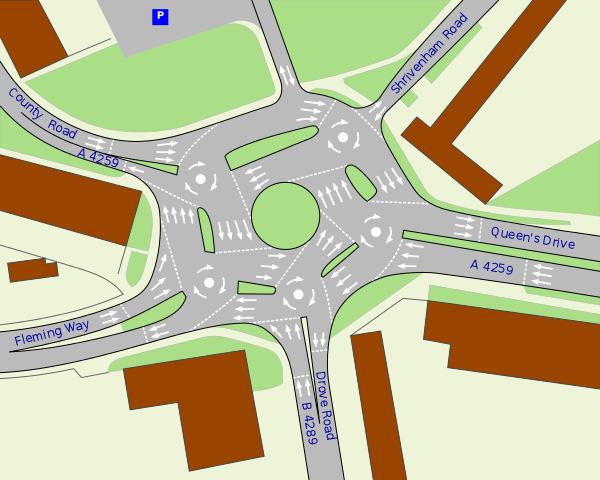 Regulars find it easy to navigate the Swindon magic roundabout but people encountering for the first time may get the heebie-jeebies and fear ending up going around in circles forever, as these two Finns discovered.

Trump may be shrewder than we think » « Is Trump losing his marbles?