One may think that the sensational events of the past week, such as the release of the Donald Trump recording and his ferocious performance in the last debate, would cause major swings in public opinion in support between the two candidates. But in the past, polls seem to shift by only small amounts even with major news breaking and it is not clear that those movements were due to any actual events like debates or are due to random drifts. The latest polls do seem to show more significant shifts with a large drop in support for Trump but if the past is any indication, we may see a regression to the mean and the gap with Hillary Clinton closing again.

Sam Wang continues to remind us that, contrary to expectations with the presence of the mercurial Trump, this is one of the most stable presidential campaigns ever in terms of voter volatility, and he provides charts to prove it. Since Wang started doing this kind of analysis in 2004, the shift in electoral votes projections during the campaign has steadily decreased from 120 in 2004 to 58 so far in this campaign. Wang discusses in this post why he disagrees with other poll aggregators like Nate Silver who argue that there is greater volatility this time around. 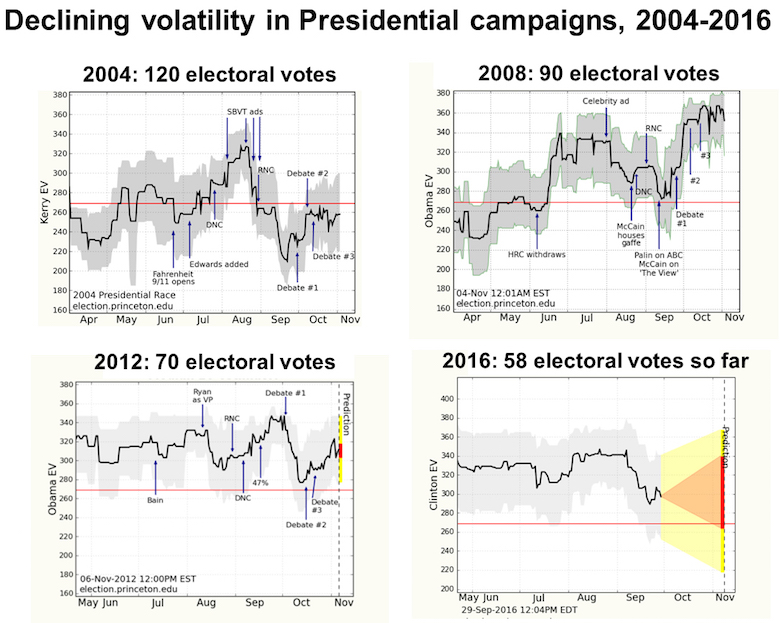 I have been wondering about this and think that the unusual stability may be because of the bizarre candidacy of Trump and not despite it. Such an arrogant, narcissistic, and forceful personality is likely to arouse an immediate response of like or dislike and once that happens is unlikely to change. With Clinton, people have known her on the national scene for a long time and have had time to form a stable opinion that is also unlikely to change.

One can imagine voter sentiment shifting back and forth between two relatively unfamiliar faces (say Tim Kaine and Mike Pence) who are making themselves known to the nation at large for the first time, as people discover things that they like and dislike about each. But Clinton and Trump? Clinton offers few surprises and Trump offers no halfway point. One quickly decides whether one loves him or hates him.

Peter Aldous reminds us of the perils of polling that lead to surprises like the 2015 British elections and this year’s Brexit vote and says that those were likely due, not to sudden shifts in voter sentiment, but to the expense and difficulties of doing random sampling well these days in order to get representative samples. Telephone polling using random digit dialing (RDD) is the gold standard but has become prohibitively expensive and has low response rates and so pollsters resort to quicker and cheaper but less reliable means and this makes polls less reliable. The margins of error that polls quote are based purely on sample size and thus measure random errors and do not take into account systematic errors.

On the other hand, at least for US presidential elections, the sheer number of polls that are being commissioned may provide a counterweight, in that the averages over the polls may wash out some of the large uncertainties of each one.