Today is Sunday when good Christians should be going to church. But while many do, more of them say they will be going while choosing to stay at home. A new report issued by the Public Religion Research Institute confirms something that has long been suspected, that people in the US tend to inflate their religiosity, in particular their attendance in church on Sunday.

Self-reported worship attendance between 2003 and 2013 is remarkably stable. In 2003, 39% of Americans reported attending religious services at least once a week, a rate comparable to the 37% who reported weekly attendance in 2013.1 The rate of those who report seldom or never attending exhibited only a modest increase over the same time period (25% to 29%). In fact, previous work has shown that self-reported religious participation has been relatively unchanged at least as far back as the mid 1970s (Hout and Greeley 1987).
…

However, the high level of self-reported religious participation in public opinion surveys is in tension with the mounting evidence of declining religious vitality in the U.S. Previous work has demonstrated the long slow decline experienced by many mainline Protestant denominations (Roof and McKinney 1987), and more recently some evangelical Christian denominations began facing shrinking membership as well.
…

The researchers surveyed people using different methods and found that the relatively more anonymous online surveys produced lower rates of church attendance than telephone surveys with a live interviewer. “Online survey respondents are nearly twice as likely to report never attending religious services as those interviewed on a telephone (21% vs. 12%) ”

The researchers attribute this over-reporting of both religious attendance and the salience of religion in people’s lives to ‘social desirability bias’, the tendency to tell other people that they conform to expected norms. What is interesting is that this bias exists even among those who identify themselves as unaffiliated. 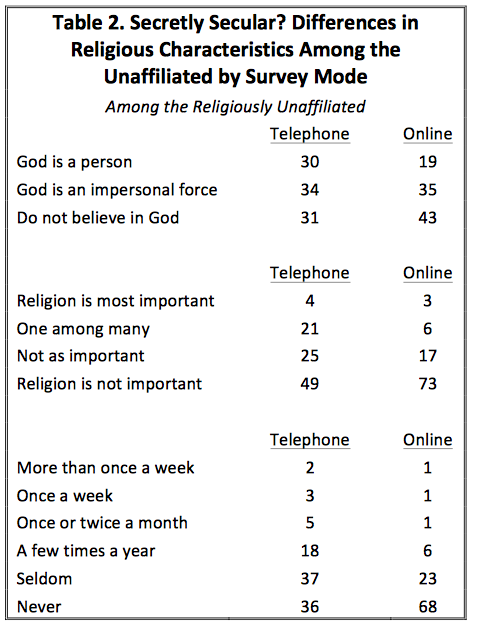 So even those who say they are unaffiliated with religion seem to succumb to the pressure of the social desirability bias.