It has long been obvious that the objectification of women is an integral part of the Fox News business model. The network features a bevy of attractive women who are required to wear dresses that emphasize their cleavage and show their legs and some shows even have a ‘leg cam’, a camera placed strategically to get the best view of whichever woman on the panel happens to have the ‘best legs’ that day, whatever that means. I kid you not.

Given that sexualized atmosphere, it is hardly a surprise that allegations of sexual harassment have surfaced with former anchor Gretchen Carlson filing a lawsuit against Fox News head Roger Ailes saying that he had openly sexually propositioned her when she went to complain to him about the behavior of her male co-workers last September. Her contract was not renewed last month, effectively firing her. You can read the lawsuit here and the crudity of the propositioning outlined there is stunning, with Ailes telling her to turn around so that he could see her behind and saying things like “I think you and I should have had a sexual relationship a long time ago and then you’d be good and better and I’d be good and better” and “sometimes problems are easier to solve” that way.

Such behavior, if found to be true, speaks of an awful atmosphere that is created at the very top and so it is hardly surprising that now there are reports of more women coming forward with similar stories. Ailes and Fox News have issued statements in response and 21st Century Fox, the parent company of Fox News, has said that it is conducting an internal review.

What is interesting is that Carlson is no dumb blonde even though she seemed content to play one on Fox, especially when she was on their morning show Fox and Friends. Back on December 8, 2009, Jon Stewart pointed out that while the fact that Carlson was Miss America in 1989 is emphasized, less well-known is that she was her high school class valedictorian, graduated with honors from Stanford University, then attended Oxford University, and plays classical music on the violin to boot.

It seemed like Carlson felt she had to dumb herself down because that is the Fox model and to not show up her two vapid co-hosts Steve Doofus Doocy (who is also accused of sexism in the lawsuit) and the brown haired guy who isn’t Steve Doocy, the latter being the recipient of repeated references by Stephen Colbert on his old show.

UPDATE: Rob Beschizza has this collection of Fox News presenters. There is something that seems common to most of them but I cannot quite put my finger on it … 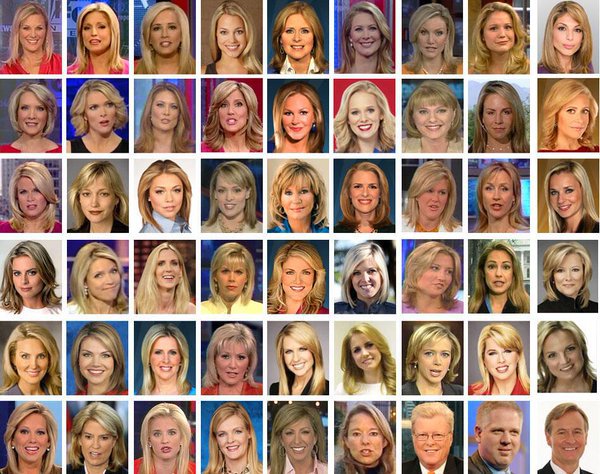