Yesterday there was a huge parade for the Cleveland Cavaliers basketball team for their come-from-behind win on Sunday of the NBA championship. It was the biggest event in the history of the city with a crowd estimated at well over a million people thronging the parade route that, because of the crush of people, took four hours to wind its way through the city and end at the downtown mall where a stage had been set up. 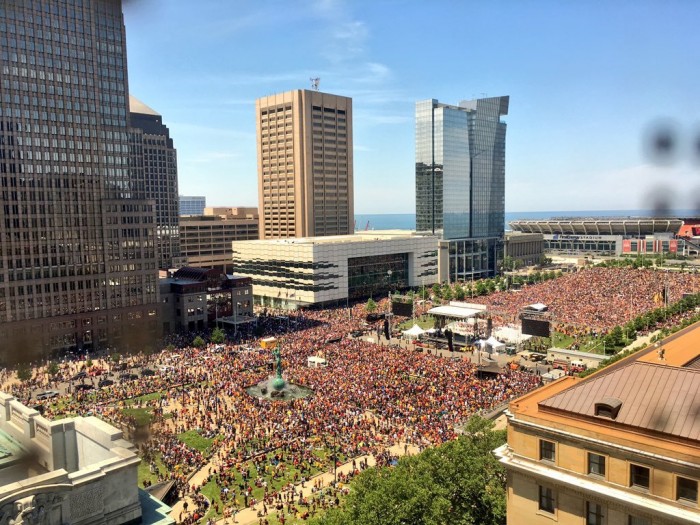 Considering that the city has a population of just a half a million and that the event took place on a working day at 11:00am, it was an impressive display of celebration, and people had come from all over the country (and apparently even from overseas) to be part of it.

Leila Atassi wandered among the crowd to get a sense of what brought them there.

We have been a fractured community in recent history, a city simmering with hostility, income inequality and racial tension. Indeed, we have seen dark days. We don’t need to recount them here. But Clevelanders, you carry them with you – and some of you reflected on those aspects of our city’s identity when asked what this championship means to you.

Felicia Adams of Euclid, who was enjoying the parade with her family on East 9th Street, said the Cavs have unified the people of Northeast Ohio by drawing out a sense of pride that transcends race and economics and subverts long-held stereotypes of the region.

“For so long, Cleveland has been disparaged,” Adams said. “They’ve called it the ‘mistake on the lake.’ They’ve said the city’s dilapidated, and we’re poor, and we have no jobs.

“And even though it’s ‘just sports,'” she said, using air-quotes. “It’s more than that to us. Finally, the pride that we’ve all felt forever, everyone else can experience it. They see it on TV. They feel it through us. … Something great has happened in Cleveland. And the Cavs did it for us. It’s just sports, but it’s not. It’s our turnaround. It’s our time.”

In interview after interview, Northeast Ohioans along the parade route offered similar thoughts, connecting the Cavs’ victory to their own sense of community. They shared stories of where they were when that buzzer sounded Sunday night – and how they raced toward downtown, certain they would end up snared in traffic but desperate to be “together.”

Others reflected on the city’s growth — on its slow, yet progressive grind toward a Renaissance, evidenced by new signs of vibrancy in some neighborhoods and construction downtown. They pointed to the city’s playing host to the Republican National Convention next month, and all that the honor was meant to signify – before the prestige of the event became overshadowed by the spectacle of Donald Trump’s unorthodox candidacy.

As I said before, one has to have lived here to get a sense of how put upon the locals have felt for so long. It is irrational, no doubt. There was no curse on the city that had to be lifted by a sports team. We were just part of the decay that accompanied growing income and wealth inequality in the nation and the related lack of investment in the public sphere. Those problems remain, sports championship or no championship.

But for the moment all that was forgotten and people regained a sense of optimism and hope. To me what was best was that the event brought together people of different ethnicities, ages, and even income groups in a city that is often divided along these lines. There was even a sense of camaraderie between police and the revelers and there was no rioting or violence or damage to property. It is too bad that such moments are fleeting but we need to appreciate and enjoy them while they last.