Thanks to the huge fuss generated by the issue of which public bathrooms transgender people can use, I have learned a lot more about the issue of bathrooms than I would have ever imagined. While the idea of public bathrooms separated by gender has, like any practice whose origins are lost in the mists of time, come to be seen as the natural order of things not requiring any explanation, this article by Terry S. Kogan, Professor of Law at the University of Utah, says that it was the result of a deliberate sexist ‘separate spheres’ ideology that saw women’s role as to be in the home to take care of children and do household chores.

The workplace and the public realm came to be considered the proper domain of men; the private realm of the home belonged to women. This divide lies at the heart of the separate spheres ideology.

But the reality was that women were increasingly active in life outside the home and those who adhered to that ideology started designing public spaces in order to ‘protect’ women when they ventured outside.

Architects and other planners began to cordon off various public spaces for the exclusive use of women. For example, a separate ladies’ reading room – with furnishings that resembled those of a private home – became an accepted part of American public library design. And in the 1840s, American railroads began designating a “ladies’ car” for the exclusive use of women and their male escorts. By the end of the 19th century, women-only parlor spaces had been created in other establishments, including photography studios, hotels, banks and department stores.

It was in this spirit that legislators enacted the first laws requiring that factory restrooms be separated by sex.

Well into the 1870s, toilet facilities in factories and other workplaces were overwhelmingly designed for one occupant, and were often located outside of buildings. These emptied into unsanitary cesspools and privy vaults generally located beneath or adjacent to the factory. The possibility of indoor, multi-occupant restrooms didn’t even arise until sanitation technology had developed to a stage where waste could be flushed into public sewer systems.
…

It was the confluence of these anxieties that led legislators in Massachusetts [at the end of the 19th century] and other states to enact the first laws requiring that factory restrooms be sex-separated. Despite the ubiquitious presence of women in the public realm, the spirit of the early century separate spheres ideology was clearly reflected in this legislation.

Understanding that “inherently weaker” women could not be forced back into the home, legislators opted instead to create a protective, home-like haven in the workplace for women by requiring separate restrooms, along with separate dressing rooms and resting rooms for women.

Thus the historical justifications for the first laws in the United States requiring that public restrooms be sex-separated were not based on some notion that men’s and women’s restrooms were “separate but equal” – a gender-neutral policy that simply reflected anatomical differences.

Rather, these laws were adopted as a way to further early 19th century moral ideology that dictated the appropriate role and place for women in society.

Every presidential year, I wonder what socially charged issue will suddenly come to the forefront, riling up people and threatening to drive all other issues into the background, like same-sex marriage did in 2004. This year it looks like it may be bathrooms, and Rich Juzwiak provides a roundup of what is going on in the states to protect us from the scourge of the ‘wrong’ people using a bathroom.

The peculiar thing is that laws demanding that people ‘use the bathroom according to your birth certificate gender’ is not only laughably unenforceable, it will, if followed, lead to a greater sense of discomfort among the people whose sensibilities these laws are designed to protect, since it will result in women using men’s rooms and men using women’s rooms. 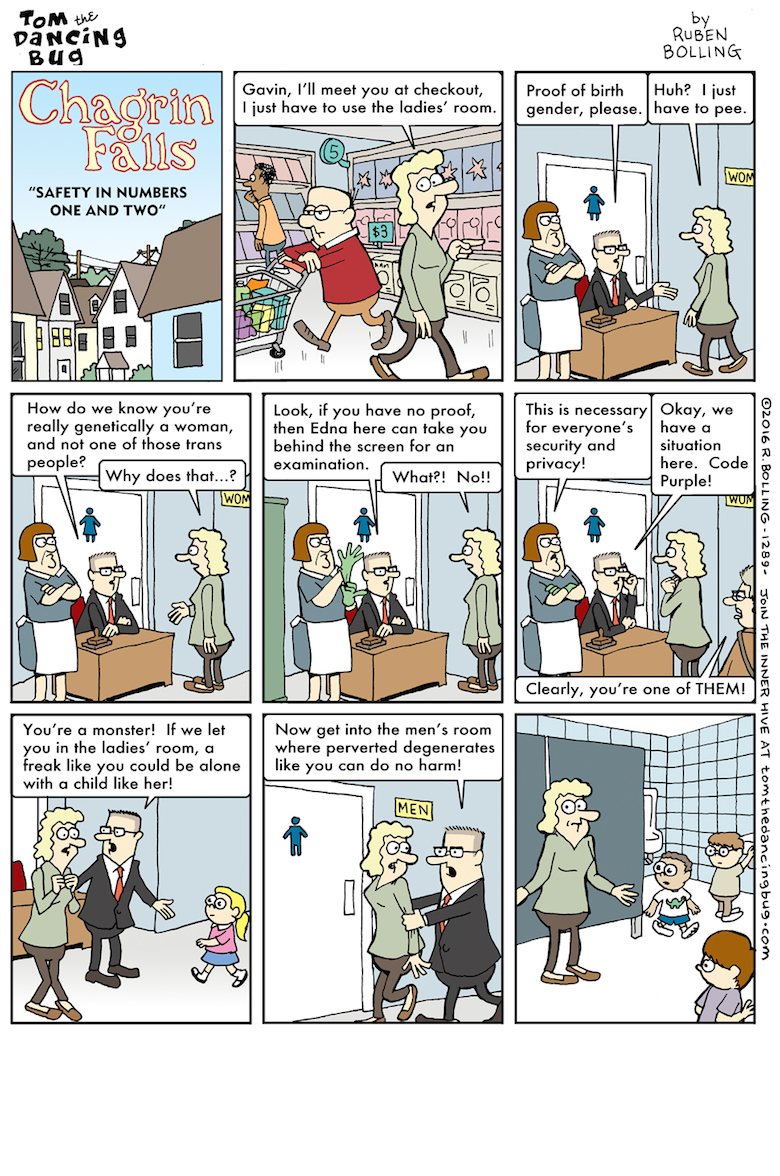