While I gave my impressions of last night’s debate, I did not evaluate the truth of the statements made by the candidates. This is partly because ‘truth’ and ‘fact’ seem to have become quaint outdated concepts that do not matter anymore within the Republican party and partly because other people usually do a much more thorough job.

Sarah K Burris has fact-checked the debate and provides a good rundown of the 19 lies and most cringe-inducing moments. She begins:

Thursday’s debate was an embarrassment for the Republican Party. If anything, the winners last night were Democrats everywhere. The candidates looked like amateurs. They seemed petty and childish, and certainly not ready for prime time. Ted Cruz needed to come out strong and seem reasonable to combat Donald Trump’s attacks. Trump contrasted with his previous debates by toning down his wild drama queen schtick, and looked a little more like a politician and less like a reality show star. Why people like Ben Carson and Chris Christie are still on the stage is beyond me, but there they were.

After listing all the outrageous things that were said, she concludes:

It’s unclear whether these folks are flat-out lying or if they’re willingly trying to mislead Americans. This was a substantive policy debate and the people who had the mental capacity to follow along tonight likely already know who they are voting for and can tell you why with specifics. The only thing that seemed to come out of Thursday’s debate is more of this petty arguing among themselves and the attempt to roast Hillary Clinton. What a waste of time and energy.

Meanwhile Jesse Berney says that Donald Trump’s response to Ted Cruz’s ugly attack on ‘New York values’ was a rare moment when Trump lifted himself out of the gutter and showed a basic human decency.

Conservatives sure do hate New York City. They hate the New York Times. They hate the liberal politicians. But most of all, they hate those damn New York values. As Ted Cruz said during last night’s Republican presidential debate, “everyone understands that the values in New York City are socially liberal or pro-abortion or pro-gay marriage, focused around money and the media.”
…

When Cruz sneers at “values in New York City,” he’s decrying modernity itself. He’s shaking his fist at progress.
…

And yet Thursday night, for the first time in the entire campaign, Trump sounded like a human being, defending the city he grew up in, the city that gave him fortune and fame.

“When the World Trade Center came down,” he said pointedly to Cruz, “I saw something that no place on Earth could have handled more beautifully, more humanely than New York.” He veered off into a standard Trump digression, but miraculously brought it back, continuing, “And we rebuilt downtown Manhattan, and everybody in the world watched and everybody in the world loved New York and loved New Yorkers. And I have to tell you, that was a very insulting statement that Ted made.”

And for one amazing moment, Donald Trump was right — and even decent. What Cruz had said was deeply insulting. He went after “money and the media” and “New York values,” a dog whistle so loud he might as well have called the city “Hymietown.” New York deserved a defense and somehow, Trump delivered one.

Mark Silk also thinks that Cruz’s definition of New York values’ as “socially liberal or pro-abortion or pro- gay-marriage, focus around money and the media” is code for saying “New York=Jewish”.

I think Cruz did not expect Trump to use the 9/11 totem and that was why he was seemingly nonplussed. The reviews for Cruz on this exchange have not been good and this newspaper headline kind of summed it up as far as New Yorkers were concerned. 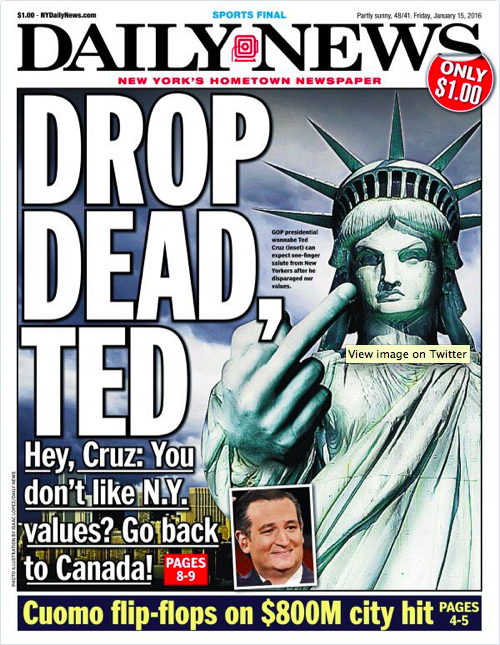