2014 had the record for the warmest year ever but its hold on that title will be short-lived since it looks like 2015 is going to eclipse it quite easily. In the UK, the British gambling firm Ladbrokes has for the first time ever stopped offering bets on a white Christmas, instead offering bets on record temperatures instead.

This graph pretty much tells the story. 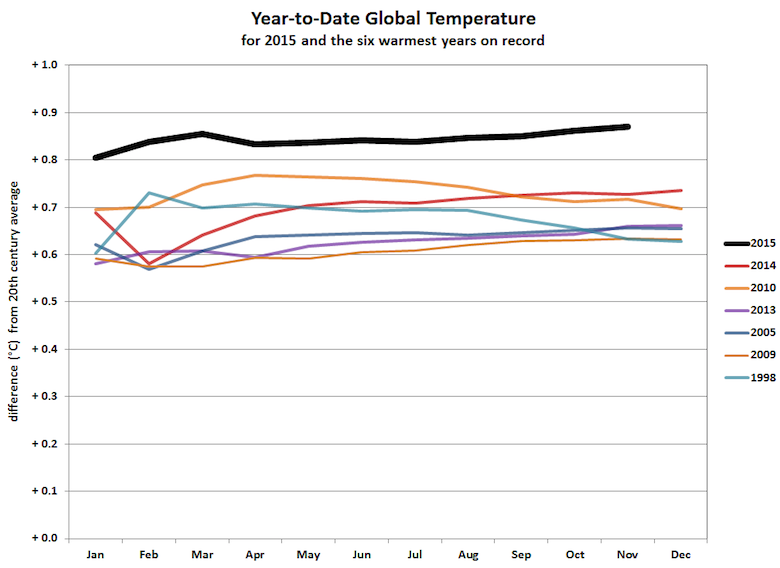 It is true that this is an El Nino year that brings unusually warm weather but what has been extraordinary is how easily this year has beaten every other hottest years, and also how so many of the warmest years on record have been in just the last decade.

The Paris summit to deal with this problem has ended with a deal being reached. An agreement of this complexity is hard for outsiders to get a handle on. I am not in a position to evaluate the merits of the deal and so am dependent on the views of others. While the reviews have been mixed, the general impression I get is that there seems to be a cautious sense of optimism that, unlike the 2009 Copenhagen summit, this one has produced a plan that may lay the foundation for real progress in the future.
This article looks at the good, the bad, and the ugly aspects of the deal that was reached.

There have been disagreements about the value of what was achieved.

As many analysts have pointed out, the plans—known as nationally determined contributions, or N.D.C.s—are, collectively, not nearly enough to avert catastrophic climate change. Nor are they necessarily going to be realized. The U.S.’s N.D.C., for instance, relies on power-plant regulations recently finalized by the Obama Administration. Should a Republican be elected president next year, it’s quite possible the rules will be revoked. These and other weaknesses prompted James Hansen, the climate scientist sometimes called the father of global warming, to label the accord a sham.

“It’s just worthless words,” he told the Guardian. “There is no action, just promises.” Writing in the Times, Bill McKibben, the author and climate activist, described the accord as “designed for about 1995,” rather than for 2015, or, if you prefer, for 2020, which is when the pact is supposed to take effect.

Most other commentators were far more upbeat, however. Jeff Sachs, director of the Earth Institute at Columbia University, called the agreement is “a diplomatic triumph” and “an act of true global co-operation.” Narendra Modi, India’s Prime Minister, said, via Twitter, “Climate justice has won & we are all working towards a greener future.” Giza Gaspar Martins, chairman of the bloc known as the Least Developed Countries, described it as “the best outcome we could have hoped for.”

Though it may seem impossible, both groups, those who say Paris is just words and those who call it a triumph, are probably right. In order to reach an agreement in Paris—and a great deal of credit for the final text belongs to the French and their determination to make the meeting a success—delegates in Le Bourget decided, in effect, to sacrifice coherence for comity. This means that the pact is not a realizable blueprint for the future but, rather, a collection of aspirations, some of them contradictory.

The main complaint was that without penalties for non-achievement of target goals for carbon reduction, the agreements would be unenforceable. Another criticism was that even if those goals were met, the target of limiting warming to just a 2oC rise may not be achieved and that even that target is not ambitious enough and we really needed to set the limit at 1.5oC, especially for those from island nations and others with a lot of low-lying areas.

One positive step is the transparency that has been put in place. Each country has to periodically release to the public what it plans to do and what it has achieved in terms of carbon reduction and it is hoped that this will shame them into actually doing something.

Another positive sign is that pretty much the whole world has agreed that climate change is a serious problem that must be addressed. The Republican party in the US is almost alone in being denialists. Up to now, they have hidden some of their objections behind claims that China was not doing anything and so why should the US. But this time China is also on board with pledges to cut carbon emissions so they will lose that excuse. Not that this will stop their denialism.