When Wisconsin governor Scott Walker dropped out of the Republican presidential race, he claimed that he was doing it for noble reasons and called for other candidates to follow his lead and also drop out for good of the party so that the party could coalesce around an anti-Trump candidate. Of course, this caused much laughter in the land since he and the rest of this bunch of clowns are only in it for themselves, with the party and the country way down on their list of priorities. So of course no one followed his lead. Now that he and Rick Perry are gone, that leaves 15 still formally in the running, though Jim Gilmore’s poll numbers are so low that he was not invited to even the second-tier debate last time so that leaves just 14.

The difference this time is that while McCain and Romney were always polling reasonably high and were at least in second or third place, this time Bush’s numbers are so low as to be embarrassing. And they keep dropping from his high of mid-July when he was in the lead with him currently ranging from 5% to 8% and in fifth place. It does not help that Donald Trump keeps belittling his poll numbers. 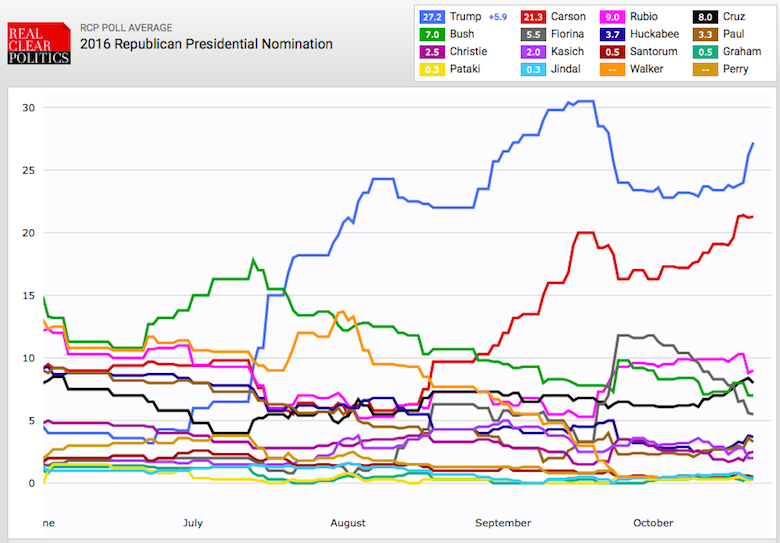 Furthermore, for someone who has run successfully twice for governor and comes from a family with a long political history, Bush seems to be really rotten at this campaigning stuff, looking stiff and awkward and prone to saying things that need to be explained away later, never a good thing. How long can he keep going like this before the political establishment and media’s efforts to treat him like a top-tier candidate begin to look obviously ridiculous and they relegate him to the ignominy of Jindal-land? It is not a good sign when establishment newspapers start raising such questions.

For Bush it is a matter of extreme urgency that others quickly drop out and that their supporters flock to him, neither of which is a sure thing. While he still has a lot of money, his average daily fundraising rate has dropped. So he must be looking closely at the others campaigns’ quarterly financial reports that came out recently where they report the money raised, the money spent and the money left in the bank. You can see the latest figures here.

Michelle Conlin writes that using the money measure, six of the candidates are barely afloat.

Half a dozen Republican presidential candidates are edging toward financial crisis, raising the specter that some may be forced to drop out of the sprawling field of contenders.

Together, they raised $6 million but spent more than $9.5 million during the summer on everything from postage to travel to campaign rallies. All six are trailing badly in the polls.
…

When direct donations to campaigns are lackluster, as in the case of these six candidates, there may not be enough money to cover basic operating costs like travel, staff salaries and office equipment. Those costs are not typically covered by big money Super PACs, which are supposed to operate independently of the campaigns.
…

The candidates could conceivably win the patronage of a millionaire or billionaire, who could funnel unlimited amounts of money into their Super PAC. But these fund-raising groups are prohibited from carrying out certain campaign activities and are therefore of limited help.

The four lowest ranking candidates (Santorum, Graham, Jindal, and Pataki) seem to be resigned to their second-tier status and will likely sputter along, happy to get what media attention they can corral. Lindsey Graham is a senator and so has little to do and can campaign between his TV appearances. Santorum and Pataki have no day jobs and can also hang in there indefinitely.

As for the two in the top ten (Huckabee and Paul) who are in dire financial straits, some are predicting that Huckabee will be the next to go. But Huckabee has no day job either and Rand Paul is a senator with little to do and has a hard-core libertarian base that might keep him going for a while longer.

I think that the next to drop out will be either Kasich or Christie. They are both governors who have real work to do and at some point pressure will build for them to give up their absurd quests when they should be back at home doing their jobs. Jindal is also supposed to be governing his state and any reasonable person, with such low poll numbers, would throw in the towel and go back to work but Jindal is delusional and I expect him to stay in for some time.

What would be the kiss of death is for a candidate in the top-ten to be relegated to the bottom tier for the next debate on Wednesday, October 28. So far, there seems to be little danger of that happening.