I came across this interesting story about a lawsuit against a statue of Jesus on a ski slope on a mountain in Montana, a statue that has come to be known as Big Mountain Jesus. Back in 1953, the US Forest Service issued a permit to the Catholic group Knights of Columbus to construct a 6 foot statue of Jesus on a 6 foot high base (now known as Big Mountain Jesus) on federal land that had been leased to a private ski resort. During winter, the base is usually covered in snow, with just the statue sticking up. 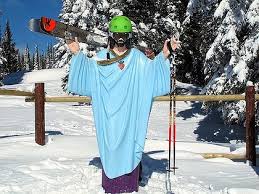 Since the land is still federally owned, the Freedom From Religion Foundation sued, saying that having a Jesus statue on federal land violated the Establishment Clause. In an opinion issued on June 24, 2013, US District Court judge Dana L. Christensen ruled against the FFRF.

It is the reasoning of the opinion that I found interesting because it addresses the question of under what circumstances a Jesus statue can be considered to be not religious.

Big Mountain Jesus has been the subject of much frivolity over the years. In addition to serving as a meeting place on the mountain for skiers, and a site for weddings, it has not infrequently been observed adorned with ski poles, goggles, ski hats, mardi gras beads, and other attire, all secular in nature. In fact, frequent repairs have been made to the outstretched hands of Big Mountain Jesus which have been dislodged by passing skiers and snowboarders who have given a “high five” to the statue.

To the extent Big Mountain Jesus may have had some religious significance at the time of its construction by the Knights of Columbus, and may have provided from time to time spiritual inspiration or offense to some, over the course of the last 60 years the statue has become more of an historical landmark and a curiosity.
…

The statue’s secular and irreverent uses far outweigh the few religious uses it has served. The statue is most frequently used as a meeting point for skiers or hikers and a site for photo opportunities, rather than a solemn place for religious reflection.
…

Similarly, the context in which Big Mountain Jesus is set is not religious. The statue sits next to a ski run and is not directly on any hiking trails used during the summer. Prior attempts at holding religious services at the statue failed due to poor weather. None of the statue’s surroundings support a religious message-there are no seats for observance of the statue or similar accommodations for worshipers. Typical observers of the statue are more interested in giving it a high five or adorning it in ski gear than sitting before it in prayer.

So basically, the judge said that even an explicit statue of Jesus that had originally been designed to be an object of reverence had, by virtue of the way it was perceived and treated, ceased to be a religious symbol.

The FFRF appealed that decision but on August 31, 2015 lost 2-1 in the 9th Circuit Court of Appeals and you can read the opinion here.

The majority on the Appeals Court agreed with the lower court judge that the location of the statue and the way that it was treated had deprived it of religious significance but in his dissent, justice Pregerson said that a Jesus statue cannot be viewed as secular.

First, despite arguments to the contrary, a twelve-foot tall statue of Jesus situated on government-leased land cannot realistically be looked upon as “predominantly secular in nature.” Second, to determine the effect of the statue we ask whether “it would be objectively reasonable for the government action to be construed as sending primarily a message of either endorsement or disapproval of religion I submit that a “reasonable observer would perceive” the statue situated on government land “as projecting a message of religious endorsement.” 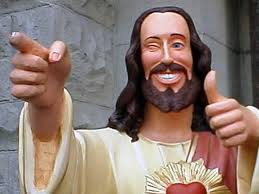 The idea that religious symbols can be perceived in secular ways is not new. For example, hardly anyone would think of the ‘Buddy Christ’ image that became popular following the film Dogma as religious, though it is indisputably meant to represent Jesus. In fact, if any government entity placed a statue of Buddy Jesus on public land, they would likely be the subject of protests by religious groups for making fun of Jesus. But Buddy Christ was clearly meant to be satirical from the beginning. What is new here is that something that had originally been viewed as religious has become secular simply because of how the public had treated it.

You can view the grand unveiling of Buddy Christ by bishop George Carlin in this clip.

Government once again avoids a shut down at the last minute » « Film review: The Imitation Game (2014)