Not content with trying to whitewash her awful record as CEO of Hewlett-Packard, Carly Fiorina, the new favorite of the anti-Trump forces in the Republican party, brazenly lied during the Republican debate last Wednesday, as this graphic shows. 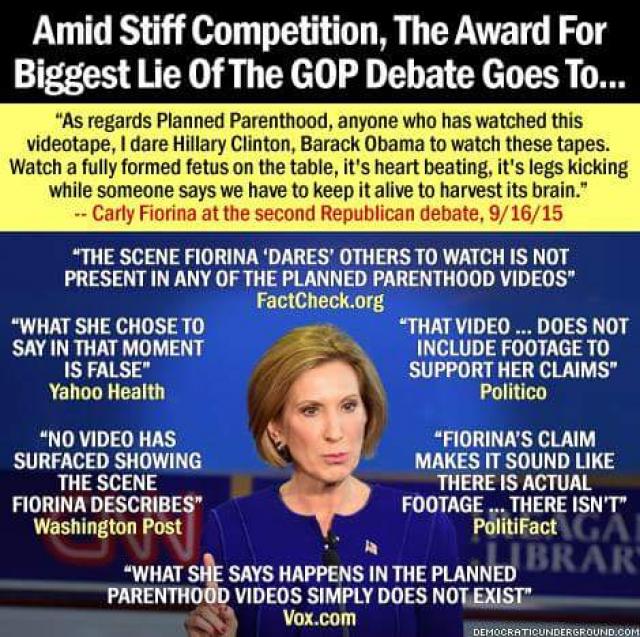 It should not surprise anyone that Fiorina denies what all the fact checkers have found. In the fact-free world that is the Republican party these days, you can say anything as long as it supports the party dogma and so none of her opponents will call her out on this lie because to do so would make them appear to be ‘soft’ on abortion, rather than pro-truth. There is nothing that strengthens my support for the pro-choice movement than the tactics of the anti-choice forces.

Another of her major exaggerations is her Horatio Alger-like story of rising from a secretary to CEO of a major American corporation, the kind of narrative that right-wing politicians love to spin because it enables them to claim that the poor are poor because they are lazy and lack the moral virtues that made them successful.

In reality, Fiorina’s father was the dean of Duke University law school and the deputy attorney general in the Nixon administration. She was a privileged child who, while a student at Stanford University, worked during the summers at a temp agency that sometimes placed her as a secretary.

So while the riches part of her rags-to-riches story is true (she was born to privilege and received over $20 million when she was fired by HP for incompetence, a manifestation of the strange reward system that exists in the high levels of corporate America), the rags part, not so much.