TThe progressive politician, who had been a mere backbencher a few months ago and a total dark horse who had been given 500-1 odds of success, won easily with 59.5% of the vote, signaling an end to the Tory-lite Blairite dominance of the party that had prevailed for so long. It was a decisive defeat for the odious Tony Blair who had campaigned hard against Corbyn.

The headline chosen by the Los Angeles Times reveals the conservative dominance of he media in the US. It said, “Divisive far-left lawmaker Jeremy Corbyn wins U.K.’s Labor Party election”. The Reuters report referred to him as a ‘Marx admirer’. 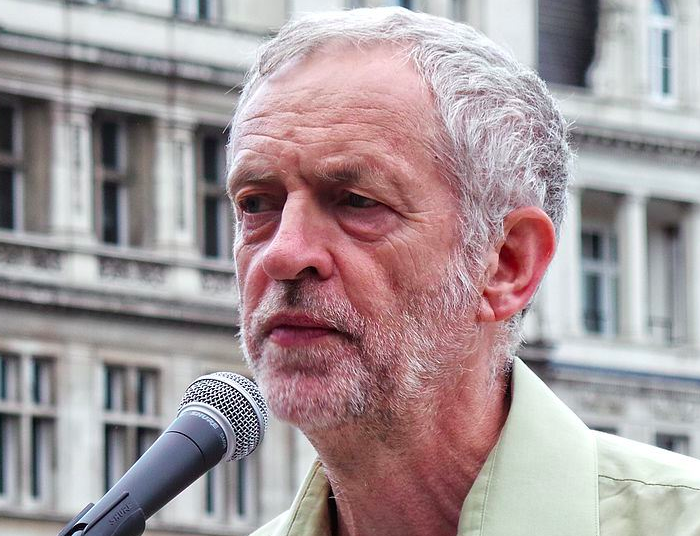 Divisive? Far left? Marx-admirer? Those are code words to suggest that Corbyn is outside the allowed spectrum of establishment thought and thus is a not a ‘safe’ candidate for the oligarchy. In his acceptance speech, Corbyn said:

Let’s look at what this so-called ‘divisive’ figure is like and stands for.

He is now 66, a vegetarian who loves to cycle and often appears somewhat disheveled, rarely wearing a tie.

He favors Britain’s withdrawal from the North Atlantic Treaty Organization, nuclear disarmament and renationalization of the country’s energy sector.
…

Perhaps the most unexpected factor in Corbyn’s victory was that he captured the imagination of young people across the country, many younger than 30.
…

He said one of his first acts as leader would be to head to a “solidarity with refugees” rally in central London.

“I’m going to go to the demonstration this afternoon to show support for the way refugees must be treated, and should be treated, in this country,” he said.

At the demonstration is support of refugees that he attended immediately after the election, he sang a socialist anthem and spoke to rousing cheers.

Mr Corbyn says refugees and their children are “ambitious” and the “waste of human resources” through the lack of human rights cannot continue. He says the government must recognise its obligations in law but “above all open your hearts, and open your minds, and open your attitudes to supporting people…together in humanity.” The speech has ended to massive cheers from the vast crowd.

He adds: “We have to have a thought about why people end up in desperate situations like this.”Corbyn said that during his many years in Parliament he has seen many decisions made ordering the military to “invade here, bomb that” but that conflict does not end when the UK pulls out. ”Surely our objective ought to be to find peaceful solutions to the problems of this world,” he added.

The Guardian provided an analysis of how he came out of nowhere to win and before the election, Jessica Elgot wrote a profile which shows a simple man who has consistently held to his principles in a long career.

Jeremy Corbyn, a soft-spoken leftwing lawmaker, is no career politician, nor a naive idealist. The 66-year-old socialist MP for London’s Islington North has been in parliament for 32 years, during which time he has voted against his own party leadership more than 500 times and had the lowest expenses of any MP.
…

But in July, the UK’s biggest trade unions backed him as a candidate, but the clamour for Corbynism from the rank-and-file became a roar later that month after the interim Labour leader, Harriet Harman, decided not to oppose the Conservatives’ budget and its new round of spending cuts.

Corbyn broke ranks – the only leadership candidate to oppose Harman and vote against the budget which he called “brutal and anti-young, and anti the poorest in Britain”. Burnham, then viewed as his main rival, said he had abstained in order not to split the party. But Corbyn won wide acclaim for his decision to put principle first.
…

Corbyn’s vision is for Labour to campaign for a radical upheaval of the economic system, not be a softer “Tory-lite” party which also commits to spending cuts. His economic commitments are popular with the young, he has promised to bring the railways into public ownership and abolish university tuition fees. He champions “People’s Quantitive Easing”, which would allow the Bank of England to print money for housing projects, energy, infrastructure and digital development.
…

By early August, local town halls soon became too small to cope with the surge of supporters hoping to hear Corbyn speak, including one memorable moment where the grey-bearded man in the knitted fawn-coloured jumper climbed on to a fire engine to speak to jubilant north London crowds who chanted “Jez We Can”. He was snapped taking the night bus home from a rally, no chauffeur-driven car.
…

As a fervent anti-war and pro-Palestinian activist, Corbyn has attracted the most stringent criticism for his foreign policy, with the Conservative chancellor, George Osborne, going so far as to call him a “national security threat”. He opposes the funding of Britain’s Trident nuclear missile system and has previously indicated he would favour leaving Nato, or even the European Union, though he has played down both those ideas during the campaign.

Most notable of his desire to break with the past has been his promise to apologise for Tony Blair’s decision to go to war in Iraq, should he become leader.

His decades of activism have been put under intense scrutiny as he emerged as the frontrunner, including an interview in which he called Osama bin Laden’s extrajudicial killing “a tragedy”. But he has defended many of his controversial meetings, including with Hamas, Hezbollah and others known to have expressed brazen antisemitism, as simply being willing to meet all sides of all conflicts.
…

His decades of activism have been put under intense scrutiny as he emerged as the frontrunner, including an interview in which he called Osama bin Laden’s extrajudicial killing “a tragedy”. But he has defended many of his controversial meetings, including with Hamas, Hezbollah and others known to have expressed brazen antisemitism, as simply being willing to meet all sides of all conflicts.

I suspect that it is his consistency and genuineness that have drawn huge crowds to his meetings and gained the support of the young, many of whom are fed up with the empty promises of unprincipled politicians. The parallels with the appeal of Bernie Sanders in the US are obvious.