Just when you thought that politics could not get more trivial in the US, we reach new lows. The decision by president Obama to officially have the traditional name Denali become the official name of the mountain in Alaska that had been called Mt. McKinley should have been a minor news item, relegated to one paragraph in most newspapers except perhaps in Alaska. 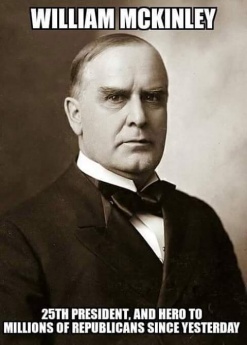 But nothing these days is too trivial to not make a fuss over and we now see once again an absurd storm over this silly issue. It is being portrayed as either an unbridled abuse of presidential power or a sign of Obama’s racism and hisfirst step in erasing all landmarks named after white people.

Of course, Ohio politicians, especially Republicans, are positively outraged that one of their former presidents is being dissed in this way. But even people who have no ties to Ohio are wading into the fray. Donald Trump is, as usual, way out ahead and promising to change the name back again if elected president. Mike Huckabee says that Congress should move to stop the name change. So what will the other candidates do to one up those two? Will Ted Cruz promise to shut down the government unless the McKinley name is restored? Will Bobby Jindal throw a temper tantrum and threaten to stop breathing?

The editorial board of the Plain Dealer listed the grandstanding statements by Ohio politicians on this non-issue and ridiculed them.

Given that Alaskans of all persuasions demonstrably want to name the mountain Denali, it is hard to consider the protest by Ohio’s congressional Republicans, who are all, starting with Portman, up for re-election in 2016, as anything more than a publicity stunt.

Then again, thanks to Portman, Boehner and their allies, maybe America’s major challenges are behind us. Maybe the federal budget is balanced. Maybe the nearly 10,000 uniformed Americans posted in Afghanistan are no longer in harm’s way. And maybe Ohio’s statewide poverty rate, and the poverty rates in the congressional districts of Reps. Bill Johnson of Marietta, Steve Chabot and Brad Westrup, both of Cincinnati, and Mike Turner of Dayton are no longer higher than the national rate.

If so, have at it, gentlemen: Having solved so many of our other problems, the name of a mountain thousands of miles from Ohio deserves to be at the top of your agendas.

The Republicans seem to have lost all sense of proportion, where every minor issue is elevated into a major confrontation. But perhaps we should not be surprised at this disconnect from reality. After all, 54% of Republicans still think Obama is a Muslim while only 29% think he was born in the US.

Incidentally, the US Geological Survey has just announced that the height of Denali is 20,310 feet, 10 feet less than the previous stated elevation of 20,320 feet. Coincidence? I think not. It is only a matter of time before concerns are raised about Obama reducing the height of the tallest mountain in America as symbolic of his secret desire to reduce America’s greatness.

Fallout from the Ashley Madison hack » « Unusual out in cricket