The murder of the nine people in a church in Charleston, SC has of course prompted discussions of why anyone would commit such a terrible act. If the killer had been a Muslim, there would be no debate. He would have been immediately branded a terrorist and his motive would have assumed to be that it was driven by his religious beliefs and was part of the war waged by Muslims against the US and civilization in general and Christians in particular.

But in this case the murderer was white and despite his own words asserting a hatred of black people and his desire to spark a civil war, the idea that he was part of a wider movement by white people to eliminate black people is not even considered and people are looking deep into his background to try and figure out his motive to see from where he got the paranoid idea that blacks are taking over the country.

Some Republican presidential candidates and right wing media and commentators seem to be hesitant to ascribe racial animus on his part despite his own clearly stated words published in an online manifesto. It should be noted that the killer hated Jews as well but in their case the ‘problem’ (in his eyes) was that “Jews look white” and are thus presumably hard to distinguish from ‘good whites’.

White supremacist groups have been quick to distance themselves from him and claim that he was a ‘lone wolf’, acting independently of any organization or group of people. The ‘lone wolf’ theory, that he got his idea entirely on his own and was not directly indoctrinated by his association with hate groups, is a popular one whenever the killer belongs to the dominant group. 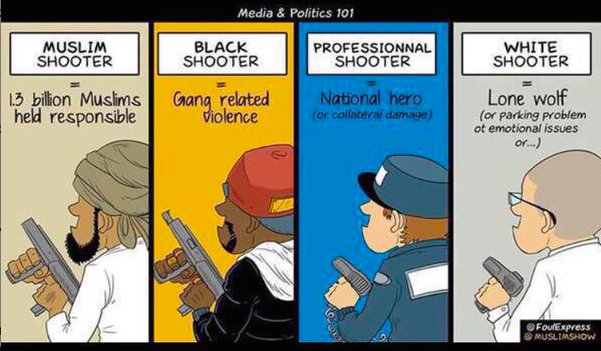 People seem to think that the lone wolf theory absolves everyone else from complicity in his actions, but actually it makes it much worse because people do not get their ideas totally out of nowhere. There must be some seed that that was planted and later germinated. This killer’s thinking and actions were not based on some murderous impulse that can be dismissed as a momentary aberration but cold-blooded and premeditated and based on a fairly concrete set of beliefs. If someone has been part of a group that actively propagates a doctrine of racial hatred, then one can understand where their ideas came from.

But if the killer was not being systematically indoctrinated by a group of people, then from where did he arrive at his conclusion that black men are raping white women and that black people are taking over the country and that white people are in danger of being subjugated? Those ideas had to have been planted in his brain from somewhere and in the absence of an identifiable group of people, this means he arrived at them by a process of osmosis, from it seeping into him from the general culture. That is a very disturbing thing to contemplate because that means these poisonous ideas are present in the general culture and thus are being propagated widely and much more subtly than crude propaganda directly targeting individuals. They are thus likely to infect even more people though one hopes that they will not be manifested in such a terrible way.

Many of the so-called Muslim ‘terrorist plots’ in the US that the authorities with great fanfare claim to have foiled turn out to be those that required a lot of coaxing and bribing by government informants and agents to persuade the alleged perpetrators to even become involved in the planning (see here and here). On occasions when individuals in the US decide seemingly on their own that they want to join ISIS or some such group, it is assumed that they have been influenced by some kind of pervasive ideology that has infected the Muslim world. But when we have a killer who does not fit that mold, we are reluctant to ascribe a similar indirect influence.

The existence of ‘lone wolf’ killers means that they get their ideas from the environment unlike those who were entrapped by the government or those who were systematically targeted and indoctrinated by others. The fact that someone is a lone wolf does not exonerate the community at large from responsibility for his actions. If at all, it makes it worse, because not only does it tell us something disturbing about our culture, its diffuse nature makes it much harder to counteract.

Online harassment of women » « An enjoyable weekend of films