Politicians pander to those over 65 because they tend to vote in greater proportions and are also concentrated in key presidential states like Florida. Media also tends to pander to them because they tend to be the largest demographic that watches cable and other news shows. Tom Brokaw gave them the complimentary title of ‘The Greatest Generation’ because of the fact that they lived through World War II and that has somehow come to symbolize that they are somehow more meritorious than subsequent generations, a totally unfounded view.

The elderly in American can be separated into two broad classes: Those who are well-to-do and for whom Social Security benefits form a very small part of their retirement income, and the rest who depend largely or almost entirely on it for survival or cannot afford to even retire. Despite some politicians (mostly Republicans of course) and media commentators (mostly conservatives of course) suggesting that these benefits are too generous and should be reduced and/or the eligibility age be increased, the average monthly benefit is only about $1,300 and “52% of married couples and 74% of unmarried persons receive 50% or more of their income from Social Security.” As might be expected, people in the lowest quintile of income receive almost all of it from Social Security.

In fact, rather than cutting Social Security benefits, a strong case can be made that they should be increased and I am glad to see that call being echoed by some politicians like Bernie Sanders and Elizabeth Warren. Furthermore, the idea of ‘means testing’ benefits so that better-off people don’t get them, while superficially appealing, should be opposed because as soon as that happens, many of those better-off retires, who tend to be more politically powerful, may see Social Security as a welfare program that benefits only the poor and may stop supporting it.

The AARP (American Association of Retired Persons) is the largest organization representing the interests of retired people. Although eligible by age to join (you have to be only over 50, a milestone I passed ages ago), I have not joined it because a long time ago I got the impression that they were a group that seemed to be mainly concerned with protecting the interests of better-off older people, even if the interests of children and other worse off sectors of the population had to be sacrificed.

I am still wary of being associated with wealthy retirees because support for my view that they are not that sympathetic to the needs of the less fortunate comes from recent polling on Obamacare. Its popularity has been steadily rising and a new report from the Kaiser Health Tracking Poll that says that for the first time, favorable views of it have edged out unfavorable ones by 43% to 42%. 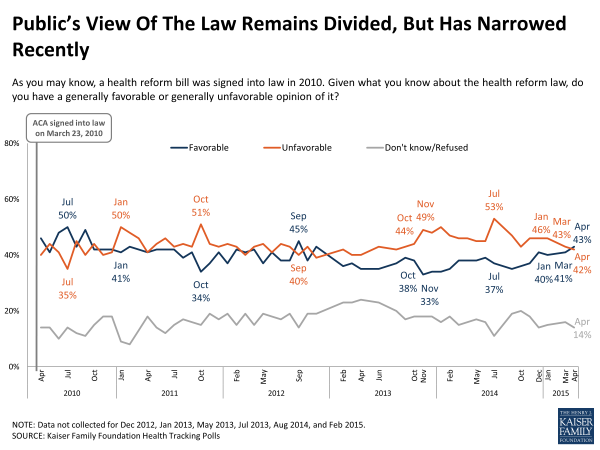 70% of Democrats favor it but 75% of Republicans disfavor it. But the unfavorable numbers are skewed by those who are older than 65, whose opinions really should not be taken too seriously because they are unaffected by Obamacare since they are already covered under Medicare. They oppose it by 45% to 38%, though even here the gap is narrowing. 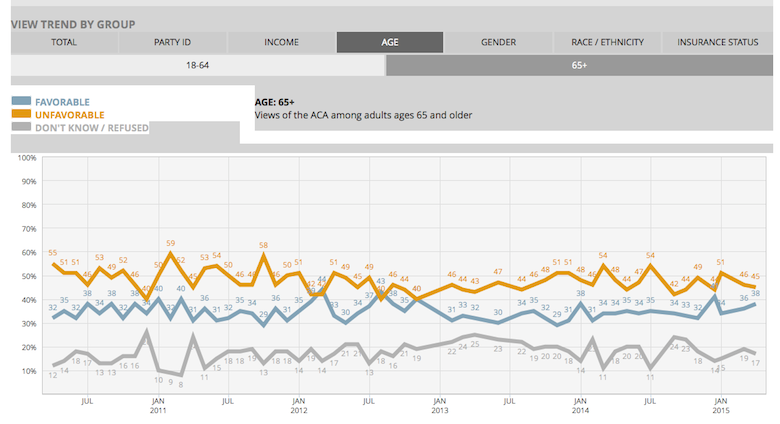 I suspect that the reason for the opposition to Obamacre among the elderly is the concern that was expressed when Obamacare was on the verge of being approved, that the influx of more people with health insurance would make it harder for those who already had it to schedule appointments and so forth. In other words, they did not want the available health resources to be distributed more widely, even if the beneficiaries were poor people and children, in the belief that more for others meant less for them. They’re ok and they want to keep it that way.

Since I do not want to be affiliated with such a group in any way, I will continue to keep tossing away the AARP mailers that they keep sending me unless I am convinced that their primary focus is on improving the conditions of poor retirees.

What is the true ISIS origin story? » « Why is it so hard to learn that no means no?