Nothing grates on me more than the “oh, that’s just America” excuse. I’ve heard it a few times from other Canadians, usually to excuse some anonymous bit of racism. Let me be blunt, and show you what Canadian fascism looks like. 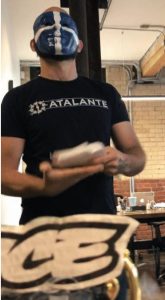 It’s rather true to character, come to think of it; in Canada, fascism has custom T-shirts printed, paints their own nationalistic mask, and politely walks into your office.

When they entered our offices, they offered flowers to the employee who opened the door. They then tossed leaflets and clown noses all over the floor. The group went to my office to offer me a trophy they had tinkered on which read “VICE media trash 2018.”

The journalist in question, Simon Coutu, speculates the half-dozen men made the three-hour drive because of this news article. Alas, it hasn’t been translated into English, but Google Translate gives you an idea of what Atalante’s all about.

For several months, groups dressed in black, paramilitary appearances, are seen in the streets of Montreal. Their passage is usually very brief. The time to put some posters, stickers, distribute food to “their homeless”, to take a picture and publish them on Facebook.  They bear the colors of Atalanta and the Soldiers of Odin (SOO), two ultra-nationalist or far-right groups that oppose Islam and immigration. […]

Katy Latulippe has recently moved to Montreal. She argues that ultranationalist Atalante training is also growing. Born in 2016 in Quebec City, the organization says it advocates a “community, sports, cultural and intellectual identity policy”. Its members regularly parade through the streets of Quebec, particularly to call for the “remigration” of Quebec’s cultural communities, the return of immigrants to their country of origin. […]

Although they are at most a few dozen members, today they have very little opposition in [Quebec’s] capital.

That last line should bother you: yes, these people are a tiny fringe, but they’re a well-tolerated fringe that are growing in popularity unlike their American peers. They’re trying to open addiction-recovery homes to whitewash their image, getting on the good side of local police, doing their own border patrols, and are even called out in specific by our Prime Minister. Vice Canada has been closely following these groups, so I encourage you to click over there to get up to speed.

And never let the “but at least we’re not as bad as America!” excuse leave your lips.

NOW You Can Celebrate » « Back to Basics