I’ve had a draft cooking for a while over Laci Green’s view of trans* people. I don’t claim to know why she’s hanging out with MRAs or treating TERFs as if they were feminists, but if she’s going to sit down and attempt to make logical arguments the least I could do is return the favor.

But then this happened. 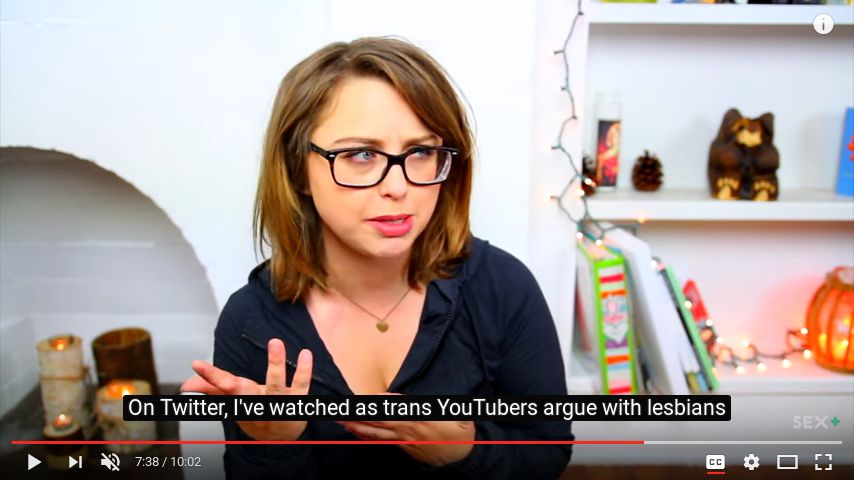 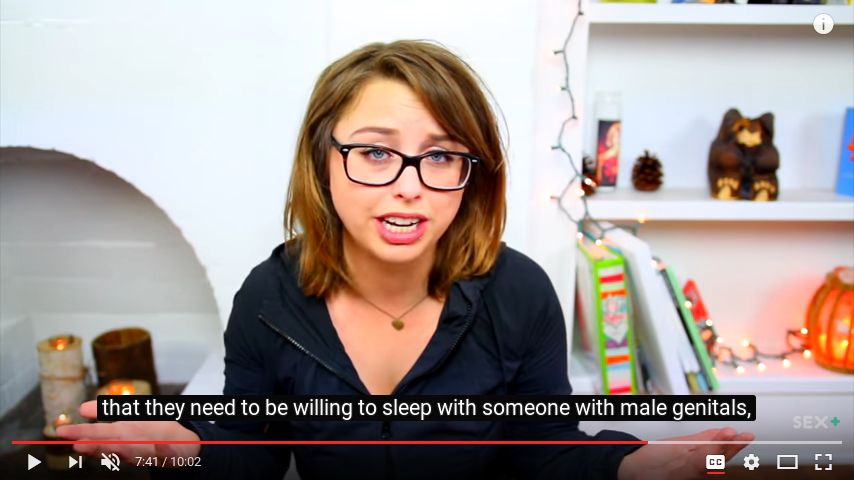 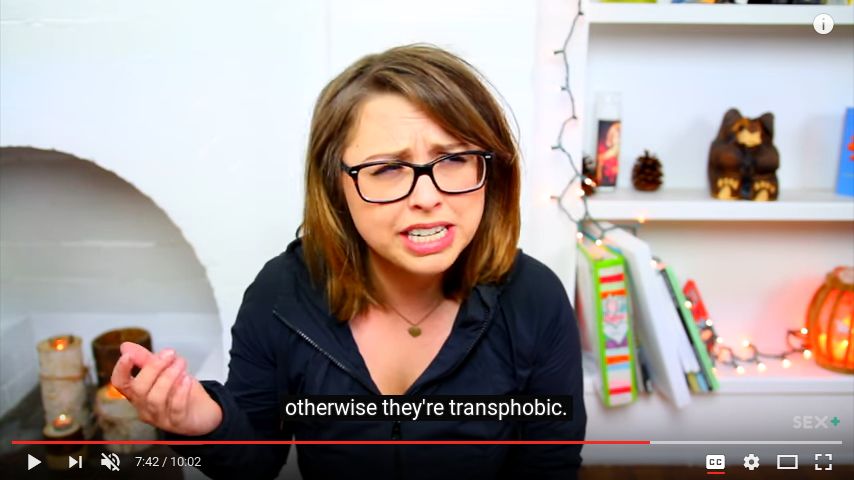 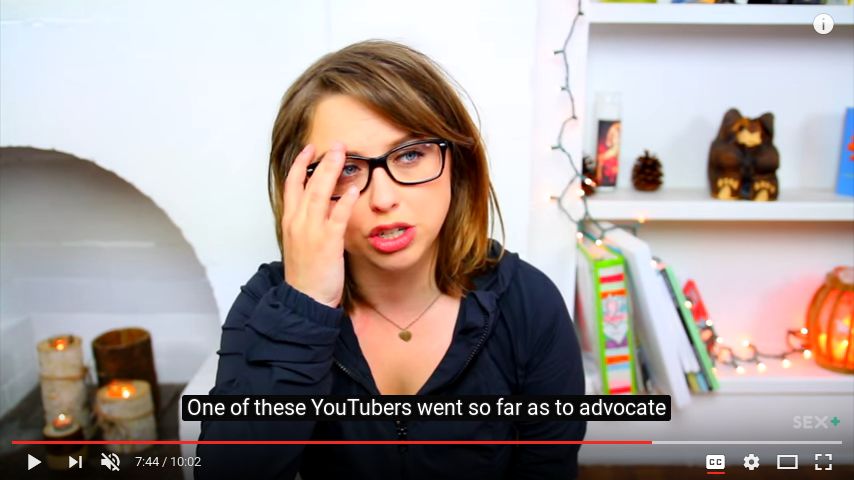 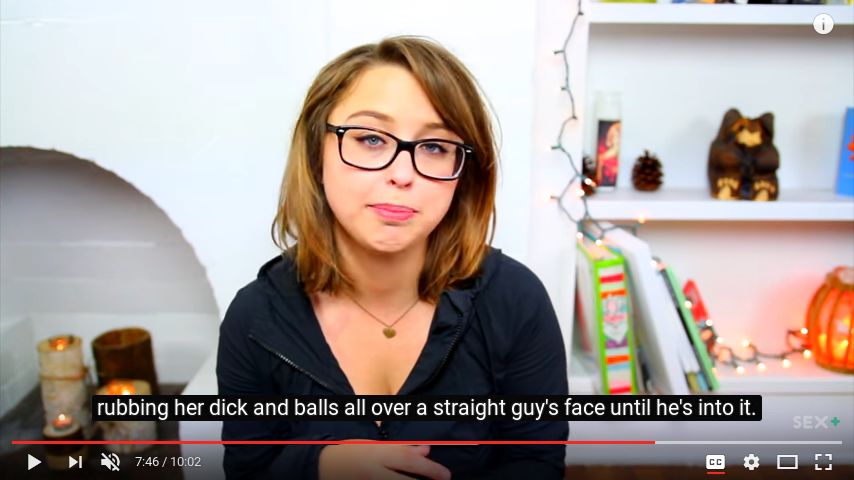 Assaulting a straight guy with your genitals sounds really nasty, right? Good thing that trans YouTuber never said that, and in the very next instant Green proves it. 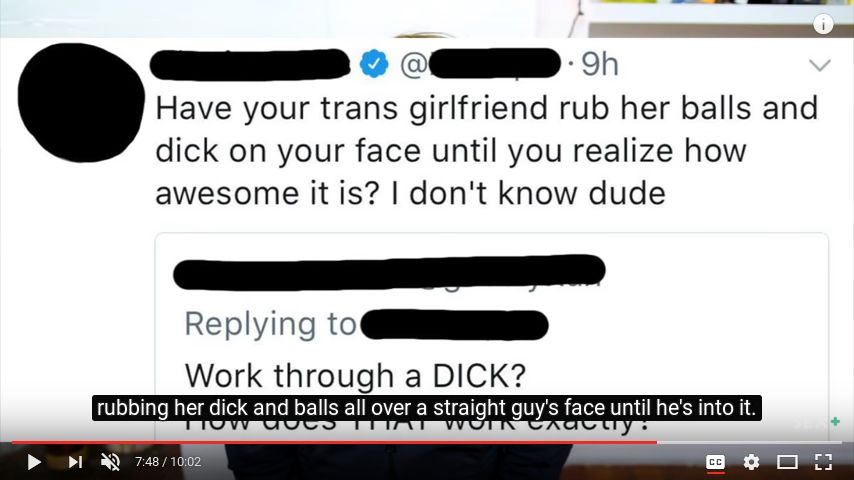 First off, this Tweet’r is replying to someone who can’t figure out how a straight guy can handle sex with their trans* girlfriend. These people aren’t strangers! Secondly, this is advice on how they could have sex, not how they should have it.

Thirdly, by showing a screen-cap of the tweet, said trans* YouTuber was able to out themselves. Thus we can see the full context of that tweet. 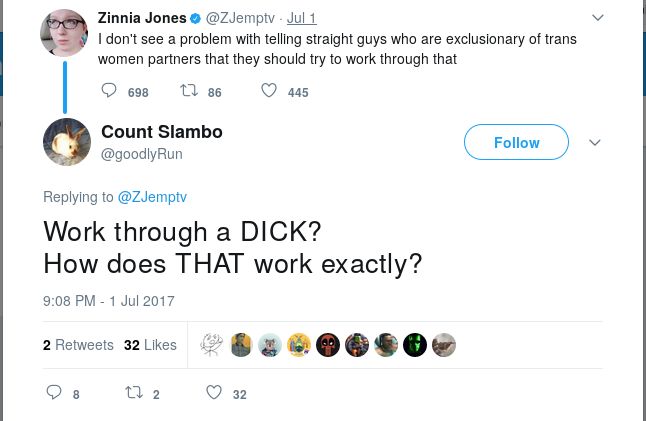 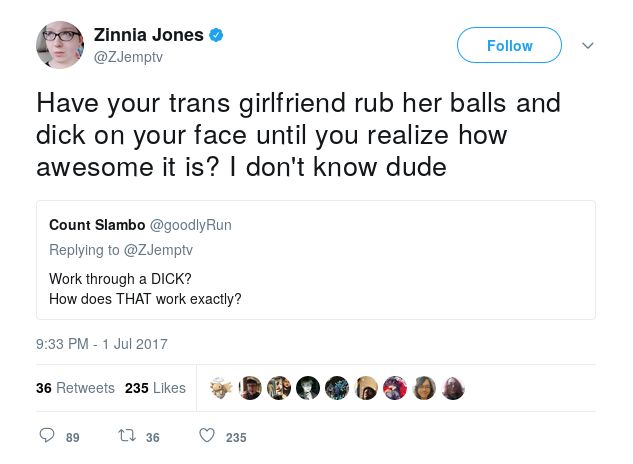 Laci Green completely mis-characterized Zinnia Jones, claiming she supports assaulting straight men when in fact she’s advocating for consensual touching of a partner. Zinnia Jones is handling the response in her usual NSFW way, but this is a new low for Laci Green. A year and a half ago, Green was singing the praises of sex positivity.

00:00:45,128 –> 00:01:00,676
GREEN: Idea: Focus on improving a different part of yourself than your appearance. Like your brain or your skills or, like, how many people you can carry at once. Apocalypse skills. Those are important. There’s so much more to life and to people than how they look, right?

00:01:19,838 –> 00:01:34,130
GREEN: Idea: Learn a thing or maybe two if you’re feeling real ambitious. Really what I mean here is learn how to be a better ally to a group you don’t belong to. So learn more about women’s issues or trans issues or race issues or like any of the other five billion issues our Earth has.

And yet here she is, shaming someone from a group she doesn’t belong to for daring to suggest someone look beyond mere appearances. This may be accidental hypocrisy, but I’ve scanned Green’s entire Twitter feed from the day she posted the video in question and failed to see any admission of wrongdoing. Instead, her latest thing is claiming that the Women’s March Twitter celebrated a murderer, when in fact there’s good evidence Shakur’s trial was unfair. 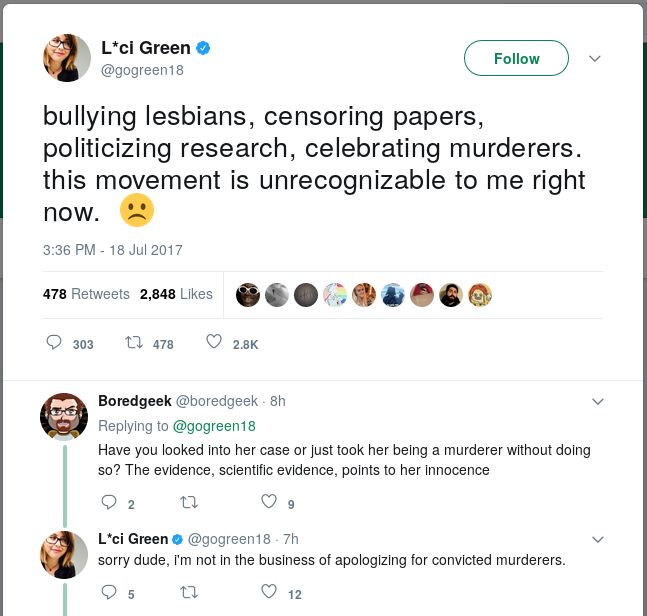 My original plan no longer makes sense. Instead, this is a much more appropriate way to respond to Laci Green.

[HJH 2017-07-20] …. I thought I was done with this topic, but there’s another detail worth pointing out. [HJH 2017-07-21] And just to be absolutely clear, the source for this section is a different video of Green’s than I looked at above. But back to what I wrote earlier: 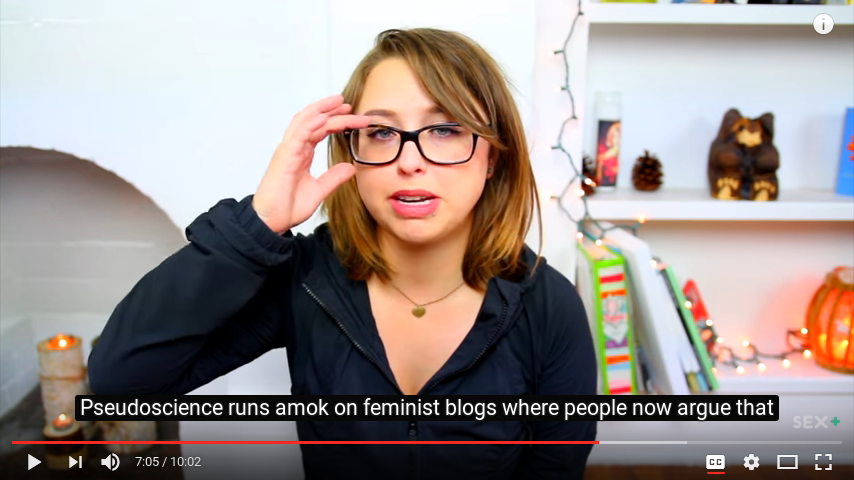 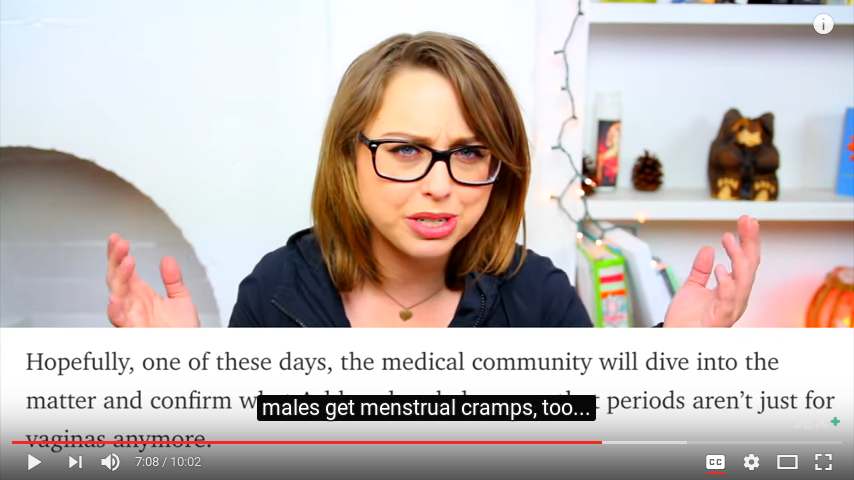 Tracking down the source of this isn’t hard.

Imagine my shock, then, when I talked with my friend Ashley last month, just before she went into the hospital for a few weeks. Nervous about the length of time she would have to stay, she told me the reason for her reticence: “I’m due for my period in a couple days, and that’s going to really suck.”

Intrigued by Ashley’s disclosure, I put out a call online for trans women to get in touch with me if they had experienced regular symptoms like hers since they began HRT. It turns out, Ashley’s not alone in her experiences — it’s not impossible for me to develop a “period” after all.

This is plausible. Every single human being possess the full set of genes required to make ovaries and a uterus. Some of us have a few extra genes which trigger testes formation, and in most cases the expression of these triggers a cascade which suppress the development of ovaries and a uterus. This is partly done via hormones, which are general-purpose signaling molecules present in every human being. While much of their effect happens during fetal development and puberty, not all of it does; bumping up your testosterone will stimulate muscle and hair growth (though it may also lead to baldness), while boosting up your estrogen will smooth out your skin and trigger hot flashes much as you’d see during menopause. And if men can experience hot flashes, why not some of the symptoms associated with menstruation? Doctors probably haven’t noticed this because until recently few people have been on estrogen, and as being a trans* woman still carries significant stigma they would be disinclined to bring it up with said doctors.

And yet Laci Green seems to think the plausible is absurd, that the lived experience of a half-dozen women can be casually dismissed with a puzzled sneer. I’ll let Sam Riedel, who tipped me off to this, nail the point home.

Green is generally quick to say that she respects trans people’s gender identities, and maybe she thinks she does. But here’s the thing: Green’s whole sticking point—that we have to call trans women male and trans men female because SCIENCE—is actively disputed by scientists. Sex is a diverse spectrum, just like gender. Demanding strict adherence to inexact taxonomies is a mistake that, for one thing, perpetuates harmful cultural stigmas. For example, the idea that cisgender men who like to sleep with trans women are “same-sex attracted” is a one that leads to “trans panic” violence as straight men attempt to prove they aren’t gay; it’s also an idea that Green endorses. “Male” and “female” are approximate terms. Is it really so absurd to push those linguistic boundaries and try to capture more nuance?

What incenses me personally about all this isn’t just that Green is dramatically wrong, or that she misrepresented & misquoted my work on a grand scale. (I’m far from the only one she’s done that to.) It’s that she’s done both of those things in a way that precisely mimics all the TERF abuse I got for trying to engage in actual scientific inquiry, however anecdotal: the mockery and hate and fervent wishes that I would experience agonizing pain for daring to wonder how my sisters’ bodies worked. And at the same time, Green expects everyone to see her as a courageous fighter for truth and reason, someone who respects trans lives but isn’t afraid to be “gender critical” in the name of upholding the scientific method.

Nevermind quote-mining her opponents, Green is starting to embrace pseudoscience herself. And the leap from “trans* women are males” to “trans* women are men” is surprisingly small; I wouldn’t be shocked if she goes full-on TERF in future.

Good news, everyone! Laci Green has responded back to Zinna Jones!

Wow. Even after pointing to the original Twitter thread, she still thinks Zinnia Jones is talking about assault. Words fail, though only momentarily: “feminists defending conversion therapy?” I can see Jesse Singal defending Ken Zucker‘s discredited methods falling under this banner, which has been criticized by feminists (rightly, IMASO). But why would Green zag all the way over to TERF or transphobic talking points when talking about trans* people? I dunno what to make of this one.

Who Watches The Social Justice Activists? » « Proof From Miracles (1)