The Short Version: A bit less strenuous than the tin says, this hike will introduce you to a wide range of biomes and rock formations. It’ll also test your navigational and avalanche skills, so don’t let it be your first or shoulder hike.

Check a few trail guides, and they uniformly call this a difficult hike. I’m not so convinced, the worst parts are barely tougher than the route to Big Beehive. If you do the recommended route, the steepest elevation gain comes between the 1km and 2.5km markers, on pleasant meadows. Having said that, I’ve survived Mount Sparrowhawk, Mount Temple, and Opal Ridge, so I might be a bit biased.

One thing I haven’t seen mentioned is navigation. This is the most braided trail I’ve encountered in Banff, with nearly constant branching on the West part of the loop. That probably won’t spin you off-track, but no two maps seem to agree on the location of the fork that heads towards 40 Mile Creek and Norquay. It’s signed, thank goodness, but screw that one up and you’re in for a 24km+ day. At minimum, bring a map and a sense of direction.

I do agree with the recommended route, though, which has you sticking West and heading North for Cory Pass, then curling around Mouth Edith and heading South. The opposite route gives you a better view and approach of Gargoyle Valley, and turns a harrowing downclimb at the 3.6km mark into a less harrowing upclimb at the 9.6km mark, but overall the default route has you climbing the steep bits and it offers you a better preview of the conditions.

The diversity of biomes you’ll encounter is staggering. The kilometer until the South tip of the loop takes you through a sparse toothpick forest, which save the occasional birch tree looks thirsty for water. The next 1.5km of the West side of the loop, the aforementioned grind, takes you through a more familiar mix of mountain meadows full of wild flowers and dense, slightly-stunted pines. Rocks make an occasional cameo, just as a casual reminder that you’re in the mountains. Glances backwards are rewarded with great views looking down at Mount Rundle and the Vermillion Lakes. The mountain reminders get increasingly more prominent by the 3.6km marker, until you’re rollercoastering along rock slabs dotted with pine forest. From there until Cory Pass at the 5.5km mark, you gradually start to realize you’re on a mountain; the forest begins to thin out, then it starts to come in clumps that dot the tops of avalanche chutes, until the vegetation finally concedes defeat at the pass. There were a LOT of avalanche chutes, by the way, and worse they were almost all dry. Mount Edith doesn’t appear to pack a lot of snowpack, so the warnings about a lack of water are legit. 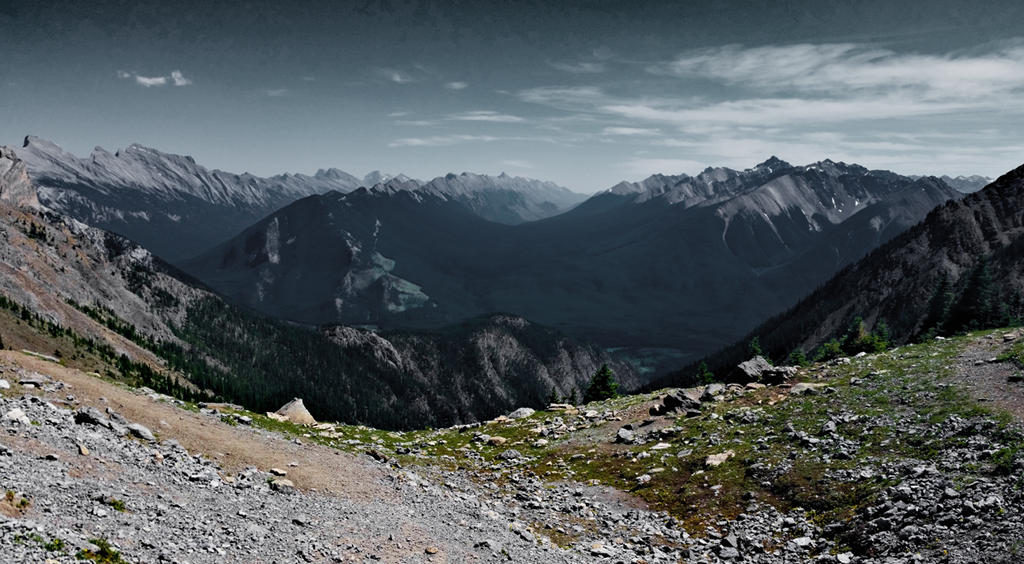 Cory Pass is no slouch in the diversity department, either. To the South, you get a attractive spread of the Sundance range, Sulphur Mountain, the Goat Range (which isn’t actually part of Sulphur, despite appearances), and the Sundance Range. To the North, Gargoyle Valley offers an attractive ridge curving off Mount Cory that butts straight into the peculiar Mount Louis, as well as a lot of depth. What looks like a former glacier from this angle is actually just tonnes of scree escaping Mount Cory. Speaking of which, said Mount makes a formidable background to the West, and a set of rock spires stand up in the foreground. 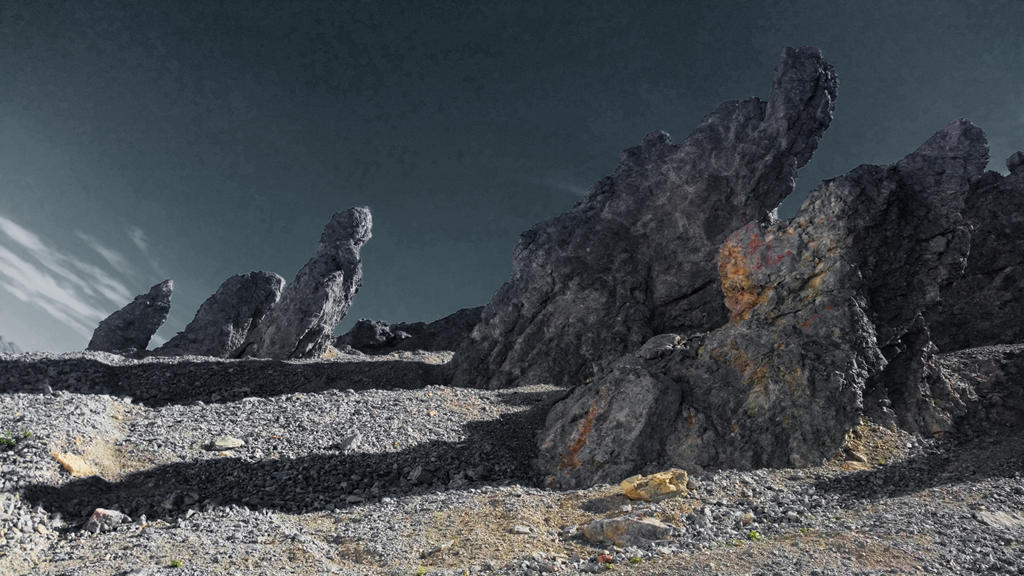 These just beg to be scrambled and explored. They also offer a bit of shade on a punishing day. Surprisingly, there also was a puddle of snow lingering in the col in mid-July, which combined to make the place feel like a luxury spa. To the East is Mount Edith and an inviting slope that leads to a tricky scramble. 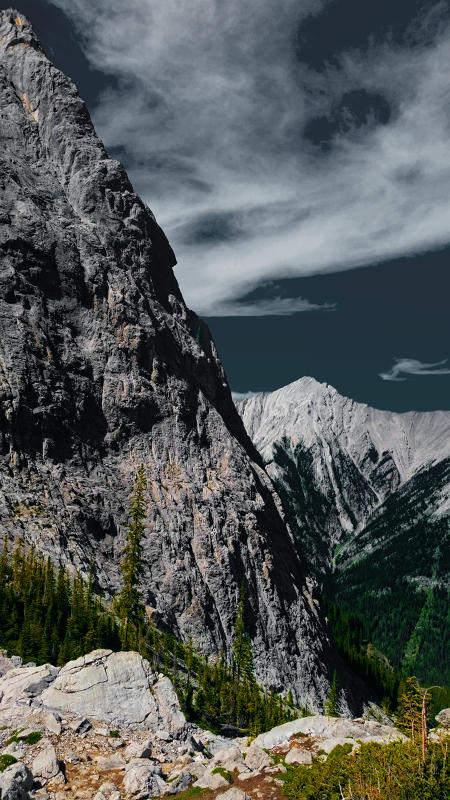 I’ve only got one complaint about the descent along the valley: it lacked scree. To those unaware, this is small-scale flat rubble that behaves more like snow than rock, which is murder to ascend but with a little bravery can be a blast to run down. Instead, it consisted mostly of heavily-beaten rock with a sprinkling of pebbles, broken up by periods of fist-shaped rubble. Tricky to descend on the steep parts, though quite comfortable if boring when it flattens out. Fortunately, the rest of Gargoyle Valley will take your mind off your footwork. Mount Edith gets shockingly cliff-y, more than the topo maps suggest, Mount Louis improves with age, and you wind up a few fingertips away from a high-elevation tarn and marsh. Marmots lurk below.

Turn the corner at the 6.8km mark, and you get a good eyeful of the valleys below Mount Brewster and Norquay. Mount Louis still keeps getting better, while Edith has foreshortened to nothingness. If you’re desperate for some snow, this section would be your best bet at grabbing a handful (if the weather hasn’t blasted it away, of course). From here, you descend South into a mix of avalanche territory and destroyed forest. Its as if a giant started kicking trees down the hill, there’s no shortage of decapitated stumps. An entire bank of young trees is tilted at 45 degrees. Debris is everywhere.

Around the 7.2km mark you hit a wall of trees. This is a high-elevation rainforest, swarming with dense brush, mosquitoes, and tree roots that rise from the ground to grab your ankles. Mount Louis still gets better, but the trees insist on photobombing it. This lushness alternates with destruction, until about the 8.4km mark when lushness finally triumphs over the elements. It starts to mellow out too, with the trees pushing away from each other and the dense bush giving way to a carpet of moss and ankle-high greenery. Around the 9.2km mark, you start chasing a creek down the hill. The next two kilometers are a Director’s Cut of the area around Troll Falls, but the uniformity drains it of a little fun.

The transition back to toothpick forest comes a bit too quickly. You barely feel the turn towards the West at the 11.8km mark when you stumble onto the bottom of the loop. From there, history repeats.

This area offers more chances for exploration than most. The rock spires should offer hours of fun, Mount Edith is worth a close-up, strong-legged hikers could have fun exploring Gargoyle Valley up close, and if desperate you can refresh the hike by reversing the loop. It’s worth keeping near the top of your list during the main season, if only because all those “difficult” ratings keep the tourists to a minimum.