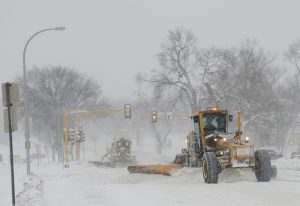 We’re winding down to the last week of our winter break, and Mary and I took off to the Big City for a few days. We had no grand plans, just a break from the routine, where we’d hang out in a hotel and do some exploring. Unfortunately, we got there immediately after a major storm dumped a dense layer of wet snow on the city. We arrived as the snow plows were clearing out places where we could park — and they weren’t done by the time we would leave. That cramped our style, since walking around the city was slogging through nearly impassable piles of thick soggy stuff. Our grand adventure was reduced to short walks to nice restaurants.

We also met up with Marcus Ranum, who was in Minneapolis to help a friend move. He drove a truck from Pennsylvania to Minnesota during a snowstorm! I want a friend like that, who’d drop what he was doing to drive 800 miles to help me move. We got a pleasant eveing out of it, at least.

Yesterday was spent driving back and taking naps. Now I have no excuse, I have to start assembling a syllabus and getting organized for genetics.