I got my present the other day, shipped to me by my niece, Rachael. 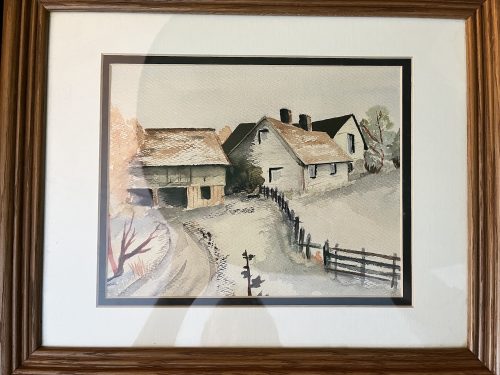 Are you dazzled? I know, let’s get real: if I tried to sell that at a garage sale, I might get $5 for it, and that would be entirely for the frame (it is a nice frame). It’s worth a lot more to me, though, and it’s entirely because of its history. It was passed on to me after my brother’s death, and he had in turn inherited it after my father’s death, and he had rescued it from my grandmother’s house after her death. Grandma had several paintings by this artist hanging in her home, proudly displayed in good frames, and I remember them from my childhood. They were the most prominent pieces of art in her home.

The artist was my father.

He had painted these watercolors when he was a teenager, which would date them to the mid-1950s, when he was pretty much a stereotype of the classic 50s teenage troublemaker — hair slicked back with Brylcreem, on the football team, letterman’s jacket, tinkering with cars or playing hooky to go fishing, all of that. But also…he wanted to be an artist. That was the dream. He painted, he sketched, he had standards. Unfortunately, his family was dirt poor — his father had died when he was very young, and he and his 5 siblings were raised by their widowed mother, who worked picking fruit in season, and at a cannery in town out of season. They lived in a shambles of a house (but I loved that house!) right next to the railroad tracks, and apparently on the wrong side of those tracks.

I don’t think he ever even considered the possibility of art training. Once he graduated from high school, he went straight into the work force. He worked on the railroad, as a logger, as a mechanic and gas station attendant, as a water meter reader, as a custodian, as anything he could do between stints at Boeing — Boeing was, of course, the big kahuna in Seattle, with the best pay and benefits, but they were also a fickle lord, with regular waves of layoffs. It was a tough struggle to raise a family as a blue collar worker in an unpredictable economy, and he was sometimes reduced to working two jobs to make ends meet. Art? It doesn’t pay the bills. There was little free time, either. He’d get home at some odd hour and flop his aching back down in bed, to try and get a little rest before going off for another shift of hard labor.

Sometimes he’d ask me to read the comics to him while he rested, but he was picky. Hal Foster’s Prince Valiant or Burne Hogarth’s Tarzan, that was the good stuff, although he also liked Turok, Son of Stone. It had to have good art, none of that talking animal stuff. Some evenings the whole family would just sit at the table and draw, while he showed us how to sketch people and do perspective. My brother continued that practice for years after he moved out and started his own family.

He never did get any professional training in art, and had little opportunity to practice it, but I think it made a difference to his family. We grew up with a working class appreciation of the arts and an aspiration to do more than just work for a living, since we could see how the demands of labor had deprived our father of his dream. We never fell into the trap of anti-intellectualism or turned into Fox News zombies — I’ve got a remarkably progressive and open-minded family, and never had those uncomfortable holiday get-togethers I’ve read about. I credit that to a father and mother who were reasonable people who never fell victim to the irrational fears and paranoia that has poisoned so many American minds. We could just look at the walls in Grandma’s house and see that there were greater depths, depths that they were deprived of exploring, in our family of poors and manual laborers and struggling lower class workers.

That’s what the painting means to me. Don’t saddle people with your biases about what their class should be like, because they’re human beings who might surprise you with their hopes and ambitions. Also, damn, but the demands we impose on working people and our own biases have deprived the world of great potential.

Have a good Christmas this weekend, and remember that the best gifts you can give are mostly intangible.

Hey, NASA, how about renaming the JWST? » « Brings back childhood memories of going to church at Christmas