The man running for the office of dumbest politician in America has put out another ad, this time slamming trans athletes…right after the Club Q shooting. It’s not just the bad timing, but also that he has teamed up with Riley Gaines, the indignant transphobe, which opens the door to sick burns. 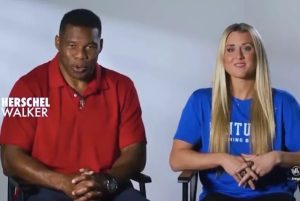 The video featured Riley Gaines, a self-described 12-time NCAA All-American swimmer. In March, Gaines tied for fifth place with trans swimmer Lia Thomas. Gaines has been complaining about it ever since.

Fifth place. She’s complaining about having to share a teeny-tiny footnote in a record book with a trans woman. That’s a photo of two cranky losers up there.

Longtermists are an existential risk » « Be anti-woke, go broke