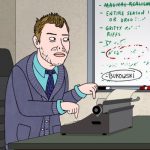 At least, no publisher ought to commission him to write about trans issues. There’s just so much information damning him as an untrustworthy actor.

I genuinely can't figure out where Jesse is trying to go with this argument. Is he going to say "not all parents are notified, only the ones who ask to be!" or will he say "asking not to be in the same changing room as a trans person is accommodations, not avoiding them!"? pic.twitter.com/sHsiIC0IVR

When anyone talks about “biological” sex or “biological” males or “biological” females, it throws up a red flag for me. What does that mean? They don’t say; there are all these unstated assumptions behind it. I have to guess that what they mean is something about penises and vaginas and chromosomes and hormones, but those are all less absolutely deterministic than they imagine. Singal is a guy who writes about sex and gender a lot, so how can he be so casual and sloppy with his words?

And then I learn he’s part of a cabal of cis journalists who coordinate their agenda behind the scenes. Singal, of course is chatting away there.

Singal posted these messages in the discussion forum of a closed listserv he belongs to, hosted on Google Groups. The listserv, per its “About” page, aims to provide an “off-the-record discussion forum for left-of-center journalists, authors, academics and wonks.” It has been around for at least eight years (I found discussion posts dating back as far as 2010), and has just over 400 members (403 at the time of this writing). These members include New York Times best-selling authors, Ivy League academics, magazine editors, and other public intellectuals—in short, a lot of important people who influence public discourse through their written work. They use the listserv’s forum to discuss current events, news from their respective fields, articles they’ve read, articles they’ve written, and other topics of public importance. There are a number of threads about trans stuff, and they read like a greatest hits of the past decade of trans-related cultural anxieties: whether Chelsea Manning would pose a threat in a women’s prison; Janet Mock’s contentious 2014 interview with Piers Morgan and the “Twitter mob” she inspired; Elinor Burkett’s New York Times piece about Caitlyn Jenner and womanhood; comparisons between Caitlyn Jenner and Rachel Dolezal; erasure of the word “vagina”; saying “pregnant people” vs. “pregnant women”; and a number of Jesse Singal’s articles over the past few years.

None of these discussions brought trans voices to the table because the group has never had any out trans members, at least as far as I can tell. “I really wish we had some trans people on this list, it’s a real void we have,” posted an award-winning investigative journalist in a thread about Singal temporarily leaving Twitter last December. “I’m not interested in sharing this list or any other space with someone who is going to insist on nullifying and erasing my existence and experience as female,” a prominent futurist in progressive news media wrote back. The exchange demonstrates two different means of excluding trans people from the discussion: passive exclusion (empty calls for inclusion that don’t lead to action) and active exclusion (we must keep them out). At the time of this exchange, the listserv had existed for nearly a decade. If the group’s members really wanted to bring trans people to the table, they could have done so at any point. The fact that they never did suggests that the group’s members—400 prominent, influential figures in academia, media, and publishing—would rather keep trans people at a safe, anthropological remove where they can talk about trans people without speaking to trans people directly. A less generous reading of this exclusion would say that they don’t see us as potential intellectual equals and, thus, don’t read our work.

Awww, how sweet — they sure would like to have some trans members, unless they somehow “nullify” cis people’s experience of their sex. I’ve met other men and women, cis and trans, and none of them have ever made me question my identity. Someone needs to get out more!

The final nail in the coffin ought to be this lengthy and thorough deconstruction of Singal’s devious anti-trans history. Here’s just a taste:

One reason we can confidently assert that Singal is distorting the narrative (whether consciously or in accordance with his own biases) is because he did consult people capable of fact-checking him for the article—he simply didn’t use their input. Singal interviewed multiple trans women for the piece, including trans writers Julia Serano and Parker Molloy, but their comments appear to have had little impact on the final draft. After it was published, both writers spoke out about several inaccuracies of fact and framing. They had addressed these points in their interviews and were ignored. Molloy’s response offers a nuanced critique of Singal’s pro-GIC arguments; Serano’s rebuttal contains crucial historical context about “how both ‘gay conversion’ and [Zucker’s style of] ‘gender reparative’ therapies share the exact same strategy of coercing gender non-conforming children to behave in a more normative manner.”

That interview was, it appears, the earliest contact between Singal and Serano, and he did not take her criticisms well. According to her, he lied about her views on transition to outrage his Twitter fan base. This would become an example of an alleged pattern of behavior by Singal. First, he is critiqued by trans people or allies. He misrepresents their positions to incite backlash online, or simply screenshots or quote tweets them to direct harassment their way. Trans writer Emily VanDerWerff said her experience with being misrepresented and harassed included “death threats, rape threats, invitations to commit suicide, [and] constant misgendering.” Singal contacts critics, threatening to sue. He contacts their employers. He sends them abusive emails. When someone reports a fact about him that he finds unflattering or releases a critique he doesn’t like, he frivolously threatens to sue and demands publications issue corrections—then howls about not getting them on Twitter. At this point, it’s a little bit of a joke on trans Twitter that every trans writer or academic, no matter how minor, is eventually subject to a Singal meltdown and volley of threats.

Singal’s behavior is unprofessional, to say the least. Julia Serano, when targeted by Singal, felt she had to temporarily leave social media for her safety. Another one of Singal’s trans targets was fired after he repeatedly contacted her boss. Singal’s habit of consistently and viciously attacking his critics poisons the well; it deflects any chance of real criticism, since it allows him to claim that any given critic simply personally dislikes him. He has, of course, helped ensure that this is the case by treating them poorly. This bad behavior extends beyond minor Twitter slap fights—it’s also a means of warping the conversation, punishing and dismissing dissenting voices before they can even speak. Leveling threats and directing abuse at sources and experts in this way goes beyond mere unprofessionalism—for a journalist, it’s genuinely unethical.

I think it’s clear that anything Singal writes on trans issues is biased, unreliable, and untrustworthy. Yet he still gets published in high-profile magazines! What do you think: do publishers and editors not realize how awful he is on these topics, or they’re all just awful people who share his ugly views?

Portrait of a whiny narcissist » « Every restaurant should have this feature