Jordan Peterson announced a while back that he was leaving Twitter for good. Strangely, he was back to posting frantically only a few hours after that.

You’d think a psychologist would be able to recognize an addiction when he sees one. 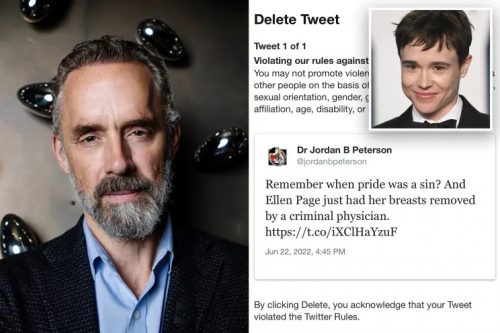 I’ve had people try to tell me that Peterson is not transphobic –he’s just highly principled and dedicated to the ideals of free speech. That tweet was just hate and disgust and contempt for others. So much for admirable principles.

He’s been off Twitter for a couple of days. His daughter is begging Elon Musk to help him. He might be able to console himself with his new ticket to the right-wing gravy train.

Peterson, who joined the staff of conservative podcast outlet Daily Wire on Thursday, is infamous for his anti-trans stance. He once claimed on Joe Rogan’s podcast that being transgender is a result of a “contagion” and similar to “satanic ritual abuse.”