If you experience difficulties typing exclamation points in a comment here, it’s because Phillip Jones has been hogging them all. I just discovered a vast stagnant pool of missives from him deep in the bowels of my university email account, which has a lot of filters on it to prioritize messages from students and colleagues, so email from outside those groups tend to languish in neglect there. He seems to go on a rage jag every few weeks and dump a lot of repetitive invective, with numerous exclamation points, typically including links to his own posts on Twitter or Facebook, as if they are authoritative sources. 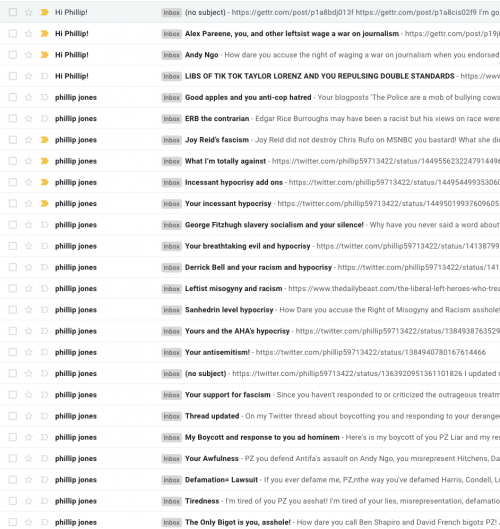 But lately he’s raging on Gettr, the right-wing pro-Trump Twitter look-alike, because his Twitter account has been suspended. Poor man. At least his emails are getting shorter.

Now I want to ask my local police if they’ve been contacted by a very emphatic kook — that was sent last night, so if the cops knock on my door and drag me away in handcuffs today, you’ll know why.

He’s going to have a tough time contacting my employer at UNMM, though. I don’t even know what that is!

It really isn’t funny » « Which one is not beautiful?