Atheists for Liberty, that horrid far-right reactionary organization, is now campaigning at CPAC. At long last, David Silverman (he’s on their advisory board) has got his wish, finding a front that will support his dream of an atheism that reeks of conservative values. Take a look at the books they are selling! 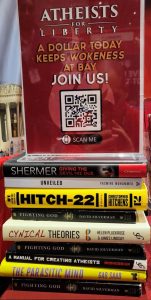 Those authors are all on their board of advisors, except Hitchens, who is dead. Also on board: Ron Lindsay, to my disappointment. They seem to be recruiting anyone who shows the slightest right-wing tendencies. I wonder why they haven’t invited me to join their board?

Also no surprise: they’ve gone anti-vax. Their argument is that there are religious exemptions, and rather than working to end them, they want to expand them to include atheist exemptions.